A different sort of tea

If you're in Bandra, the coffee shop at the Taj Land's End is a pretty good choice for a relaxed afternoon tea. 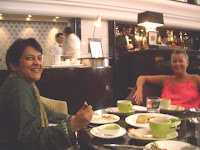 The music is never loud. The service is pleasantly discreet, without being hoity-toity. There is a large selection of teas on the menu, but the past 4 or 5 times, I've always settled for their beautiful Makaibari tea.
Makaibari - the 'champagne of teas' - comes from a privately owned estate in the foothills of the Himalayas. The estate is 150 years old, and still owned by the fourth-generation of the Banerjee family.

The first is that in a remote rural society that is traditionally dominated by men, Makaibari has several women in supervisory positions managing both male and female tea-pickers. In fact, in Makaibari's Joint Body, the women outnumber men four to one. 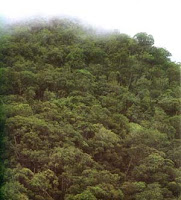 The second is their concept of 'biodynamic' agriculture: the idea that agriculture can be entirely self-sustaining, a sort of closed biosphere.

A whopping 70% of Makaibari is under forest cover. The tea bush itself is part of a six-tier system of trees and plants typical of a sub-tropical rainforest. The idea is that when tea grows like this, in a natural setting, it carries with it the fragrances and flavours of Nature.

There are other cool things about Makaibari - they run Project Panther, a program that has actually successfully reversed the decline of the leopard population in the Himalayan foothills. Makaibari has 11 leopards, by the way, and lots of other wild life as well. Most bird watchers get pretty excited when you tell them Makaibari is home to 30 Great Indian Pied Hornbills.

Makaibari is Fairtrade certified. This means workers are paid above established minimum wages, there is no forced or child labour, working conditions are safe, and workers have access to national and international labour protection (such as the ILO). 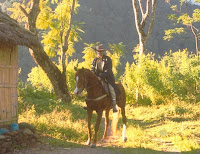 Most of this is visionary stuff thanks to Rajah Banerjee, Makaibari's current owner, who - apart from being the only cowboy this side of the Himalayas - seems to be a man after my own heart.

But Rajah Banerjee is not the coolest thing about Makaibari.

About fifteen years ago, they found a new type of creature on the Makaibari tea estates. It was an insect the exact replica of a tea leaf. Rajah Banerjee calls it the Miracle of the Tea God. It's a praying mantis that's decided it wants to start looking like Makaibari's best crop. In summer, it looks like a fresh new tea leaf. In winter, the insect carries blisters, just like the tea leaves themselves. Now *that's* what I call cool.

Anyway - the next time you're in Taj Land's End - don't just ask for Darjeeling. Check if they have Makaibari. And before you do, make sure you've read Rajah Banerjee's personal recommendation on how to have the right tea at the right time.

Acknowledgements: The plantation photos came from the Makaibari and Silvertips websites. The first photo at Taj Land's End is from mami, my Finnish friend. While I was enjoying my Makaibari, she ordered white tea - but that's a subject for another post perhaps!
Posted by Deepa at Sunday, August 26, 2007

what abt the cost of the Tea? Lol

My wife and I moved from US to India very recently. We were looking for a house, my wife -- a job, planning to have kids and it was complete a nightmare for my wife.

She was so fed up with everything that she was looking for an online community of working mothers, so she ended up creating a community for working moms:
www.imom.in.

Since, she has put in a lot of hardwork in developing this community, I am trying to help here with popularizing it. Since, you maintain a blog on single moms. I was hoping if you could suggest some ways to promote it.

Long ago, Taj Land's End was Sea Rock, Bandra. Unlimited Breakfast for 30 INR, beer served in pewter mugs and free use of the swimming pool if you were eating there (they even gave the trunks). And the place was quiet, except when a bunch of dirty jeans clad, hawaai chappal wearing, Charminar smoking bunch of Podarites landed there once a month for breakfast. Guys would pocket the small plastic cups of jam and marmalade to take home.... or may be that was at the Shamiana at the Taj. ;)

The Searock Sheraton is still there, a ghost hotel opposite the Taj. I'm told there's a legal wrangle.