In which a little bit of Greece comes to Mumbai


In 2007, before the era where food shows took over Indian television, I went to a little village called Zaros in the island of Crete.


We stayed at Studios Keramos, a small B&B, where our hostess Katerina was famous for her fantastic breakfasts. She made fresh bread for us every morning, and also all kinds of other Greek peasant-style baked treats.


I peeped into her kitchen, saw her old oven, and fell in love with the idea of baking.

It was alien to me, this whole thing about ovens. I had seen clay tandoors in India, with naans being stuck to the sides. But Katerina's kitchen was my first look at a 'proper' oven.


It seemed like magic. Ordinary dough, transformed into pies with savoury and sweet fillings - how amazing it was! Sarikopita, spanakopita, kalitsounia...Katerina would pull all these Cretan specialties out of the oven, brown and delicious. To add to my delight, many were vegetarian, reflecting the abundant greens grown in the local farms. The typical breakfast table had some 15 baked goodies, absolutely stunning. 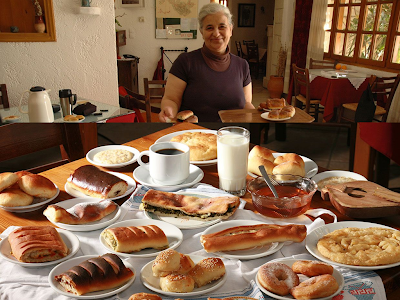 But it was bread, plain bread, that caught my fancy. Fresh and warm, straight out of the oven, eaten with loads of butter, olive oil, feta and salad.

I've been wanting to bake my own bread ever since I first ate Katerina's bread in 2007. But you know how it is. These thoughts are fleeting, and you rarely have time in your busy career to do anything about it.


The biggest problem was yeast, which is a smelly, ugly fungus, with a rotting odour that makes you wonder why you ever thought of baking anything. It's not something I am familiar with, and I didn't have the necessary initiative to go find it and tread into unfamiliar terrain.


Then as luck would have it, I happened to find dried yeast at the food store at the Mumbai airport, when I went to pickup my in-laws who were visiting for Diwali. I plonked 350 rupees on the counter and brought it home. And finally this week, I took my first stab at baking.


Here is the result - my first attempt at baking yesterday (which I converted into bruschetta), and my second one today (which is garnished with sesame and still whole). 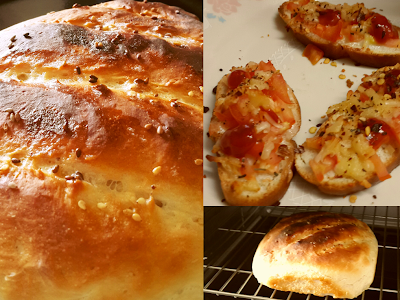 It's not as if this is a stupendous achievement, but after years of eating store-bought white bread, and having to depend on bakeries in Bandra and Colaba for better stuff, it is great to be able to bake my own bread.


More importantly, whenever I do something new, I feel good. Today it was the beauty of baking that gave me creative joy. But whether it is baking or snorkelling or climbing a mountain, I want my life to have a sense of newness and wonder all the time. I never want to be a bored, cranky, negative person who wonders how to get through the day.

In fact, I think the secret to happiness is always having many new "firsts", all through life. I hope I can keep myself open to new things, so that I never lose the joy of living.


I think I will be baking some more. And I have Katerina to thank for it :) :)


By the way, she doesn't speak a word of English. It was all hand gestures and smiles. When we left the B&B, she gifted us her famous herbed tea, it was a bunch of wild herbs from the Cretan countryside. Aishwarya's journey into herbed tea began with Katerina's wild herbs :) And Katerina also gifted my husband a bottle of raki.

When people talk about travel and how it brings strangers closer, I always think about Katerina and how she introduced me to herbed tea and baking.
Posted by Deepa at Sunday, November 10, 2013 4 comments: