At the India NonFiction Festival - Crime and Politics, served up in a heady brew


Today I went with my cousin Lavanya to the India Non Fiction Festival.

I have been reading 'From Dongri to Dubai', the story of organised crime in Mumbai, so it was great to see and hear the author S Hussain Zaidi. We heard some amazing anecdotes, all the more impactful because they were couched in very no-nonsense terms. 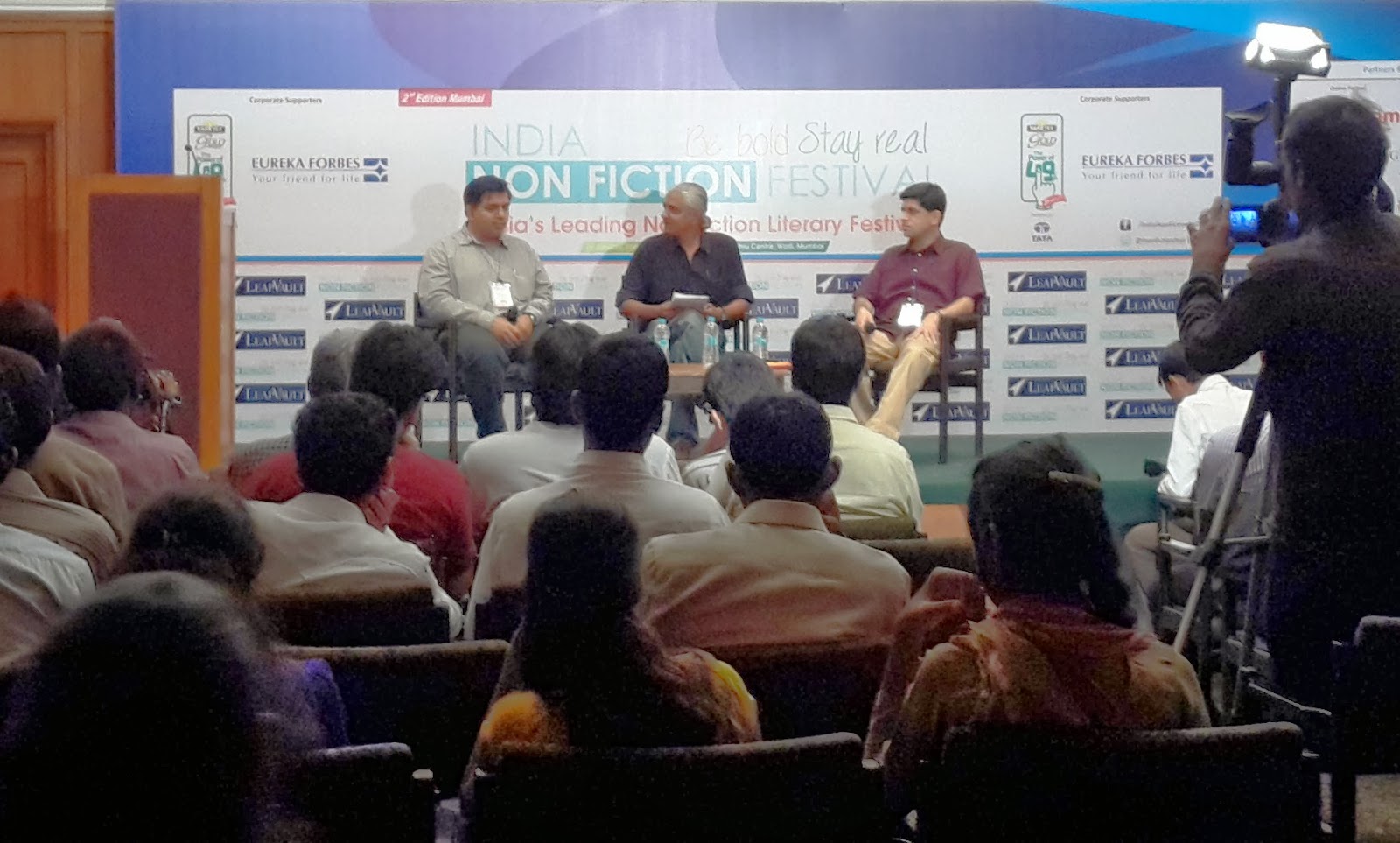 Hussain Zaidi's book is very 'Bambaiya' in character. Only in Bombay would you have three underworld brothers from the Christian quarter of  Byculla called the Johnny Gang, with names like Bada Johnny, Chota Johnny and Chikna Johnny :) As you may have guessed, the youngest was very good-looking.

And only in Bombay would you read an anecdote like this one: Apart from the Johnny Gang, there was a rival gang from Byculla's Muslim area. Ibrahim Dada was the leader of the gang. He once went to the passport office where he met Maria, a receptionist from the Byculla Christian locality. When he and Maria started dating, Bada Johnny confronted him. "Why are you messing around with a girl from our area?" And in reply, Ibrahim Dada actually sang a movie song: Jab Pyaar Kiya to Darna Kya! Where else except in Bombay? :)

The crimelords of Mumbai operated from several areas: Byculla, Dagdi Chawl, Chinchpokli, etc. They were Hindu as well as Muslim. All came from humble beginnings.

Here are some photos, so you get a general sense of street scenes from the Muslim areas of Byculla / Bhendi Bazaar / Dongri:
Hussain also spoke about his earlier book the Mafia Queens of Mumbai, a group of essays about some women who were an integral part of Bombay's crime scene. I think I'll buy the book. It sounds murky and fascinating, with a gritty street Bambaiya feel that I can't resist.

I also enjoyed listening to Vaibhav Purandare, author of 'Bal Thackeray - The rise and fall of the Shiv Sena'. The Sena's early years and the inter-linkages between politics, big business and trade unions were very interesting. I haven't read his book, have you?

Here is an aerial view of a section of the textile mill district in Parel. This is the setting for the Shiv Sena's meteoric rise. I clicked this photo in March 2008. Today the skyline of the area is dominated by high rise buildings.
I asked Vaibhav Purandare what he thought of the Sena's future strategy; specifically its approach towards violence. He seemed to feel there is no coherent strategy at the moment, given the factional in-fighting and split between the two cousins. He also feels that the Maharashtrian youth of today want jobs and education and to participate in the modern economy; not keep going back to a golden past or to keep throwing stones or damaging property.

Both authors served up a spicy cocktail of Mumbai's political and criminal landscape. The auditorium was completely full and there were lots of questions at the end.

Nehru Centre is always a pleasure to visit. Alongside the festival there was also an exhibition of tribal art; I bought a beautiful large Gond painting. In the photo behind us is a small part of the extensive set of Saura paintings from Orissa. The art exhibition is there tomorrow as well. 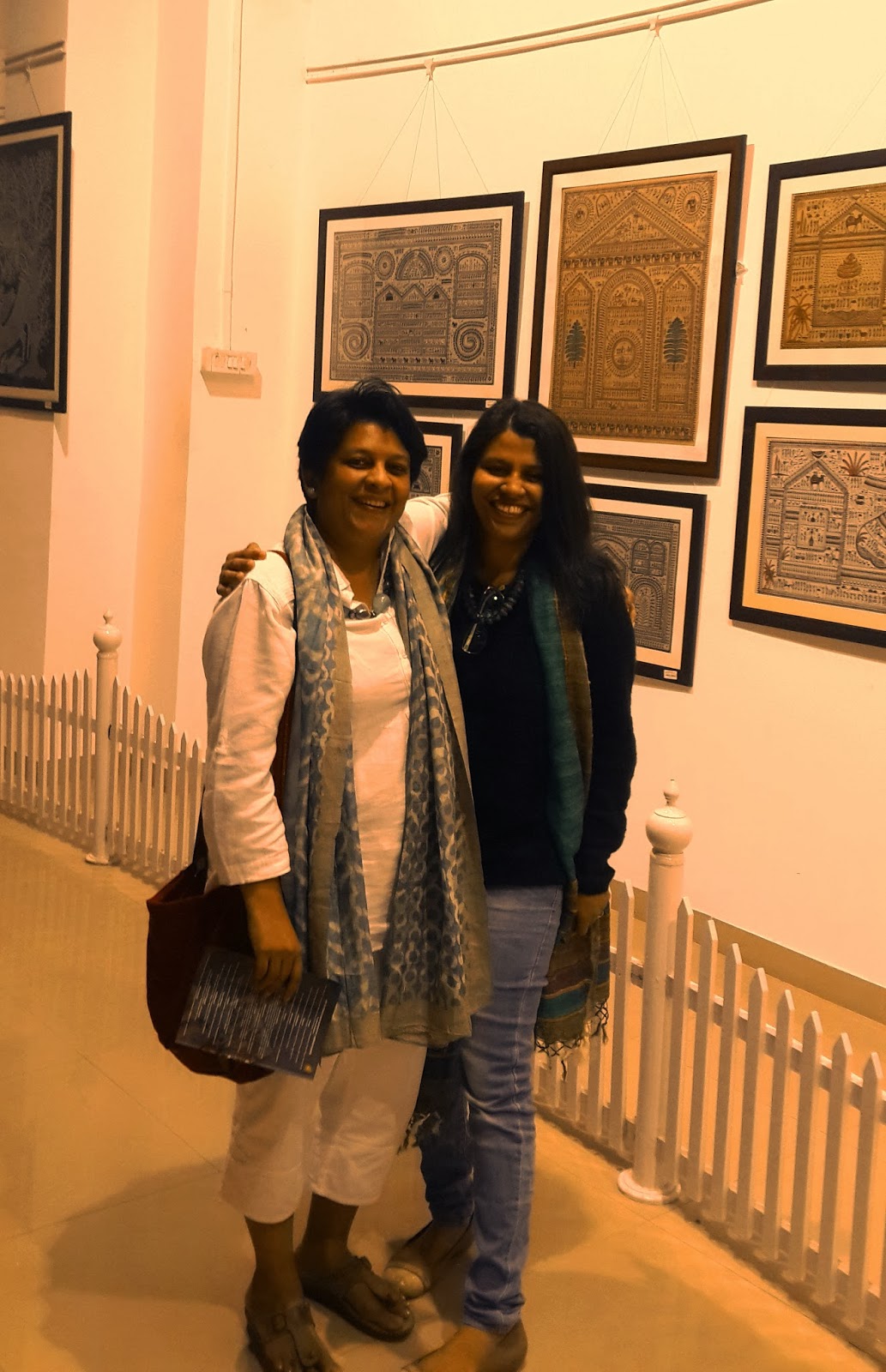 David Sassoon - from Baghdad to Bombay

If you walk into the Bhau Daji Lad Museum at Byculla, you'll see a beautiful marble bust of David Sassoon, Mumbai's most famous Jewish businessman and philanthropist.
The Sassoon family history is a little fuzzy. One theory is that they originally came from the mountainous region of Sason in modern-day Turkey. The Sasoon surname is even today found among the Armenian and Kurd population of Sason. It is possible that some Sephardic (Spanish) ancestry existed among the Jews of Sason. In fact, according to Shaul Sapir, author of "Bombay - Exploring the Jewish Urban Heritage", the Sassoons trace their ancestry to Spain, to a family called the Ibn Shoshan (ibn Susan) who lived in the city of Toledo. Perhaps some branch of the Ibn Shoshan clan migrated to Turkey.
Whatever their history and origins, the earliest member of the Sassoon family to arrive in India was David Sassoon in 1832. He was born in Baghdad (present day Iraq) to a wealthy Jewish family who served as bankers and treasurers to the pasha. Fleeing political trouble, David Sassoon moved his wealth from Baghdad to Bushehr (Iran) in 1828. Four years later, he moved his wealth further east from Bushehr to Bombay.

In the early 19th century, Bushehr was the primary port in Iran. The East India company had a base at Bushehr and nearly 100 English and Arab ships came there each year from India and Muscat to trade. Goods from China and India were traded at Bushehr: cloth, metals, spices, indigo, tea, rice, sugar, pottery and porcelain, and wood for shipbuilding. Thus, it was possibly logical for David Sassoon to transition from Bushehr to Bombay, another British trading port.

David Sassoon was 40 years old when he came to Bombay. Initially, he operated as a middleman for the British East India Company, using his contacts in the the middle-east. In 1842, ten years after David Sassoon arrived in Bombay, the British signed the Treaty of Nanking with the Chinese Emperor, opening up the Chinese market for trade in opium. Several Parsi merchants made the most of the opportunity; but David Sassoon was the first Jewish businessman to send his sons to open offices in Canton, Shanghai and Hong Kong to profit from the trade.
A sort of three-way flow emerged: the Sassoons would export Indian yarn and opium to China; then from China, they would export tea and silk to Britain; and from Britain they exported textile goods into India. It's too complicated to draw, so I've only shown the first part of the transaction in the map above (the export from India to China).

If you want to see what the opium factories and inland shipping looked like, click on the engraving below. You can see a larger image: 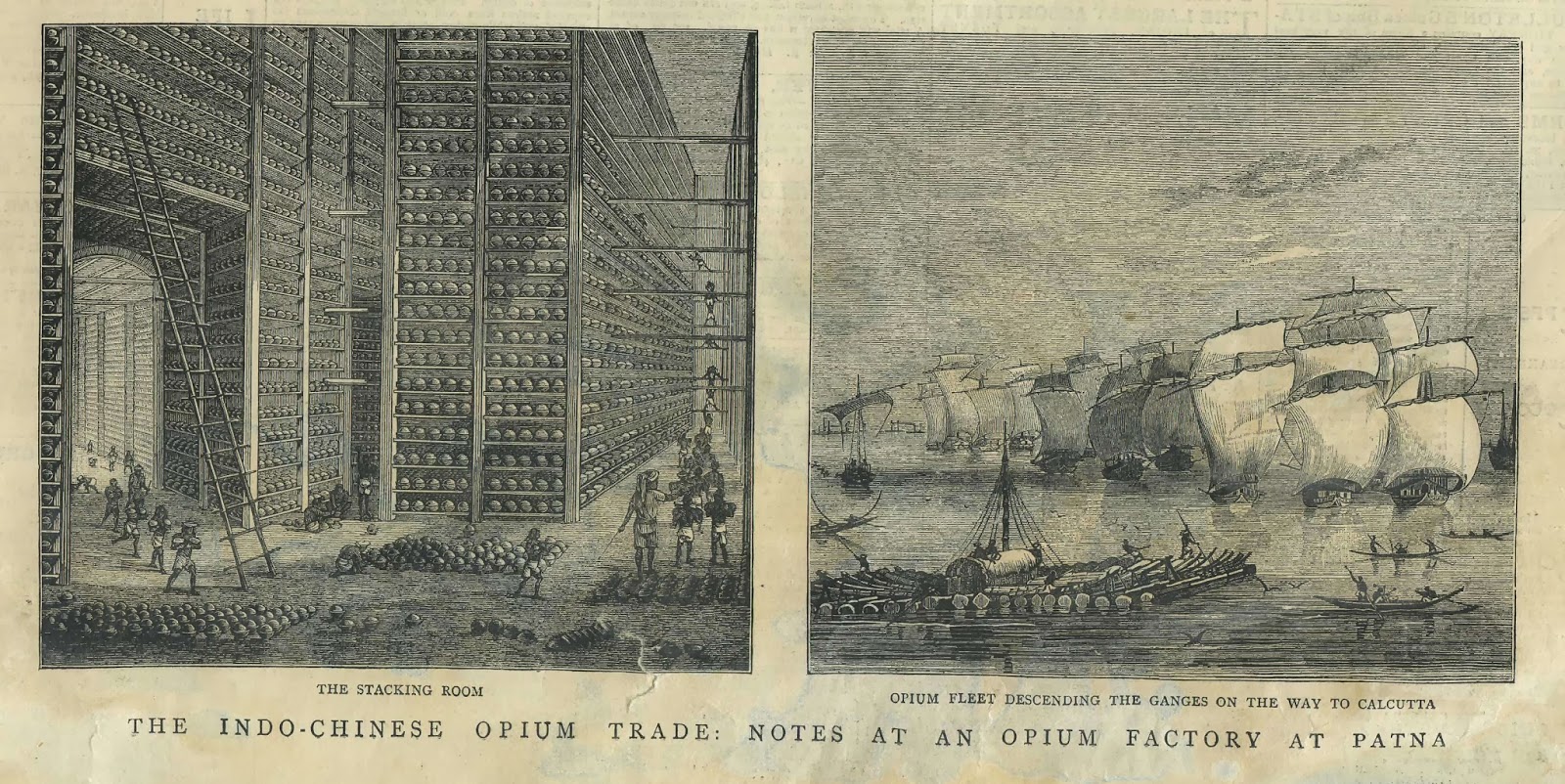 Apart from Bengal and Bihar (which the East India Company controlled), opium was also grown in the Malwa region; and indeed, it is Malwa opium where the Sassoons made a lot of their wealth. The Sassoon family acted as bankers to finance the Malwa opium crop, making advances to an already established group of dealers in Malwa opium. In effect, they purchased the crop before it was even planted.

According to Sir Jamsetjee Jeejeebhoy, a contemporary of David Sassoon in the opium business, "....the chief cause of David Sassoon's success was the use he made of his sons". And sons there were several: two from his first wife Hannah Joseph; and after her death, six from his second wife Farha Hyeem. Although David Sassoon spoke no English, his sons learnt the language and adopted Western modes of clothing as well.

As the Sassoon wealth grew, so did their munificence. They built synagogues, gardens, hospitals, schools and colleges in Mumbai. It looked as if David Sassoon decided that Bombay was a good place to settle down permanently. He built a palatial house in Byculla for himself and invested in improving facilities for Jewish people in Bombay.

Clearly the Sassoons were keen to establish an excellent relationship with the British. They owned large tracts of land in Byculla, and from their holdings they donated a parcel of land to create the Victoria and Albert Museum (now called Bhau Daji Lad Museum). Here's the statue inside the Bhaudaji Lad Museum, containing the dedication to Prince Albert, by David Sassoon:
The dedication is in five languages: Hebrew, Marathi, Gujarati, Persian and English. It says:
Albert,
Prince Consort
Dear to Science, Dear to Art
Dear to Thy Land and Ours, A Prince Indeed
Dedicated by David Sassoon
1864
David Sassoon spent 32 fruitful years in Bombay, providing leadership (and employment) to the Jewish community of the city. When he died in 1864, his son Albert Abdallah Sassoon took over leadership of the vast Sassoon business interests. By this time, the Sassoons controlled almost 70% of all the Malwa and Patna opium traded from Bombay and Calcutta, according to an estimate I read in this book.

Albert Sassoon migrated to London, married into the very wealthy Rothschild family, and acquired a Baronetcy. Another son, Elias David Sassoon, set up his own independent firm in China, and thus left Bombay. In fact, six of David Sassoon's eight sons eventually migrated, leaving behind very few Sassoons in Mumbai.

I wonder if David Sassoon realised during his lifetime that his family's involvement with Bombay would be limited to 2 or 3 generations. Today there is no member of the family in Bombay. The Sassoon home Sans Souci is now a hospital. But the home and the beautiful monuments they have left behind are a lasting legacy.
Posted by Deepa at Tuesday, January 14, 2014 11 comments: