An ode to Misal Pav

I don't understand why more people don't write or talk about misal-pav. It is, in my view, the city's tastiest Maharashtrian breakfast dish, spicy, tangy, low on oil and fantastic value for money.
Last Sunday, I photographed a plate of misal-pav (with my new camera!) at VT. It was being sold at a little nondescript hole-in-the-wall place that also sells pen refills and chocolates and aspirin. It was nine thirty on a Sunday morning, and the shop had a steady stream of people asking for misal pav.

Pav of course, is the bread. So what's misal?

The word misal means mixture, similar to the word mishran in Hindi. A lot of things go into the misal, and there is quite a bit of flexibility in how you put it together. Indeed, many Maharashtrians will tell you that nothing can beat a Kolhapuri misal, one of the spicier versions of this dish. There is the less spicy Puneri misal, the Nashikchi misal, and so on, with each local shop offering it's own personalised jhatka :) :) to the taste.

No matter what the variant, in general, a misal will have something called "usal" as its base, this is a dish cooked with safed vatana (dried white peas), matki (sprouted 'moth' bean) and chawli (black-eyed beans). Matki is the most popular, but all three are used, sometimes all together. The generic Marathi term for these ingredients is kad-dhaanya, an all-inclusive sort of word that encompasses sprouts and grains. A large variety of kad-dhanya are sold in every Maharashtrian locality in Mumbai. 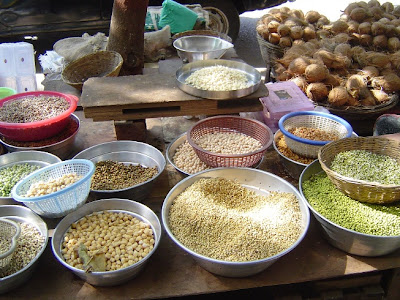 Kad-dhanya shop on Ranade Road in Dadar West, outside the Pethe jewellery shop. Everything is pre-sprouted and ready to cook, a blessing for the Mumbaikar

The key to a good usal is an eye-watering mouth-tingling spiciness, which is set off wonderfully by the pav. The spiciness comes from the unique masala.

A lot of people haven't heard of "Goda Masala", the Maharashtrian version of garam masala that goes into a traditional usal. It is a complex masala, totally unique, and packs quite a few surprises. For example, who would have thought a masala could have dried lichen (you know, the mossy stuff that grows on tree bark)? Amazing, no? The Western Ghats of Maharashtra are very bio-diverse, and they have a rich collection of lichens. So that probably explains how lichen ended up in this dish! I wonder who collects it - do they just scrape it off?!! :) :) I would highly recommend reading this wonderful account of Goda Masala by A Mad Tea Party. Great photos!

In my grandmother's home, we had masala-women, tribal migrants who came from the villages each year and pounded masalas in stone or iron mortars with huge wooden pestles. These days, the masala-women are no longer to be seen. Fortunately, you can buy goda masala in shops, like this one near Dadar station: 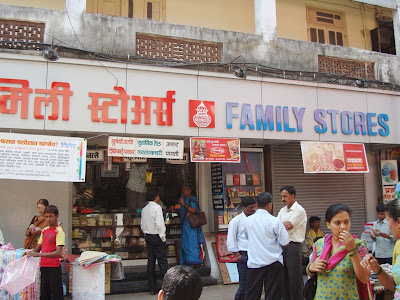 Walking into Family Stores in Dadar is an education in Maharashtrian specialty cuisine. Especially around festival days.

If you want to try making usal at home, you could skip the complicated stuff and just buy ready-made usal-misal masala, like this one from Kapol. There are lots of other brands as well. 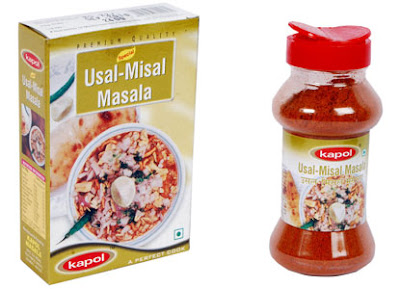 Once the usal is ready, you serve it piping hot with garnish. The garnish is usually a layer of shev (farsan), topped by onions, a wedge of lemon, and fresh coriander (as you can see from the Kapol photo above).

I've seen several different recipes for usal; some that only involve a tomato based gravy, but also some that involve tamarind. If you search online, you'll find lots of variants. If you understand Marathi, you'll thoroughly enjoy this cooking demo on Zee Marathi. The hosts of the show are TV stars; they are themselves having a whole lot of fun. The conversation is zesty and the recipe is easy. It substitutes garam masala for goda masala, so purists will wince :) but it is total dhamaal as we say here in Mumbai!!
Posted by Deepa at Saturday, July 30, 2011 12 comments:

In a Mumbai living room, doting grandparents, grand-aunts, grand-uncles, aunts and uncles gather around a little laptop screen. Everyone is smiling and saying incomprehensible things.
What's on the screen? Two tiny twins sitting at a laptop in Cinncinnati, lisping nonsense and winning hearts with every lisp. Welcome to the world of Skype in India. 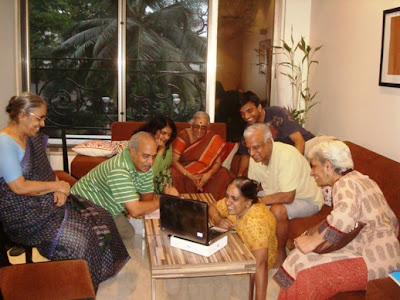 - By Deepa Krishnan
The black-and-yellow Fiat Premier Padmini has long been the iconic taxicab of Mumbai. 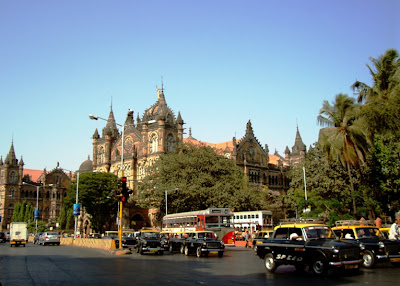 But of late, many new taxi models have started to show up, smartly turned out in the mandatory black-and-yellow. 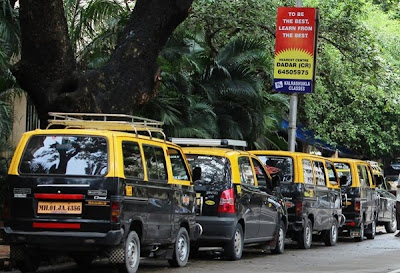 Among all the new models, though, it appears the Omni has one special advantage... 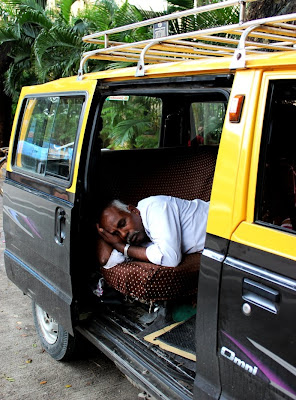 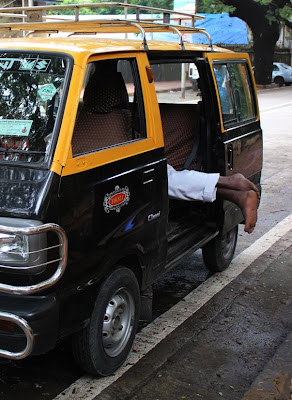