The school bell rings one last time signalling the end of classes, and food vendors outside school get ready for a rush of orders. Bhel, frankie, pakora, dabeli, vada pav, bhajiya pav, sandwiches, groundnuts, and singhara are some of what's generally offer, depending on the day of the week and the vendors in the area. And inevitably there is one thela selling amla, kairi, starfruit, bor, imli, and other sour treats.

Up until I was about 12, I was a goody-two-shoes who made a beeline for home straight after school - not looking at a single food stall. But a friend of mine who was crazy about kairi eventually began dragging me after school everyday to see whether the thela-wala had come that day. Pretty soon, I was hooked to kairi and amla (with salt and enough red chilli powder to set my tongue on fire). And this was someone who'd never considered herself a fan of anything sour in general.

Here's a larger photo of the same thela - and in between a bunch of saunf (fennel) and a bag of imli (tamarind) pods is a bag full of the small, bright aamla (Indian gooseberry) which I ate in such copious quantities in school. Moving down, there is a bag of bright green karonda (Carissa carandas, a type of dogbane, Wikipedia calls it loftily) - a small fruit which is when raw can be used to make pickles. Below that, there is also a bag of large aamlas, which are typically urer and slightly more bitter than the small ones. I have a bottle of pickled aamla at home, to eat with curd rice. 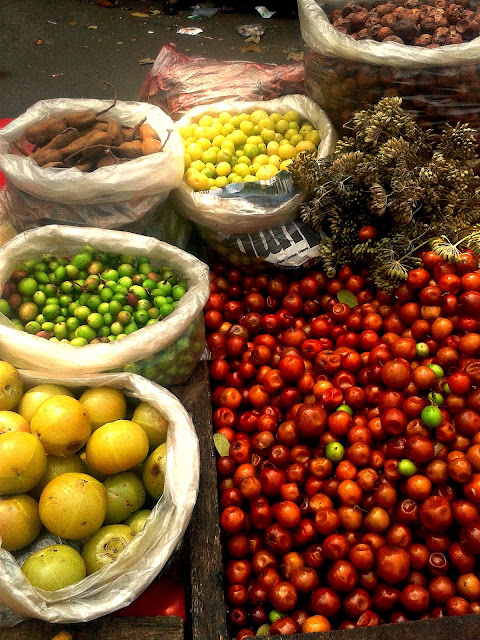 Of course, it's not just school kids - everyone likes these snacks.
Here are some more fruits available on Mumbai streets...
And here are two I've never tasted. The thela-wala told us that this small yellow fruit is like an extra sour mini-mosambi (sweet lime). On the right are wood apples - he told us its skin was so hard that it needs to be broken with a small hammer.
A college friend's mother was complaining to us about how in her time, after-school snacks meant eating these roadside tidbits, but "kids these days" eat packets of chips and burgers and ice cream. Well, alright, that may be true, but we still love those khatta things too. May these thelas bring happiness to continued generations of school kids!
Posted by Aishwarya Pramod at Friday, March 29, 2013 8 comments:


Walking through Worli Fishing Village is a bit like stepping into a time-warp. The rest of Mumbai might live in the 21st century, but this part of the city is still not far removed from the sleepy fishing village it once was.

Walking through Worli Fishing Village always makes me uncomfortable. On the one hand, I want to see the old traditions continue. On the other hand, there is the villagers' own desire to modernise, to become more like the rest of city. What we need is a strong conservation movement that helps document and preserve old houses and ways of life, but provides room for the aspirations of local inhabitants. I was in Ahmedabad this week, speaking at a training program on heritage management, and there is some excellent work that is being done in that city to revive the inner city areas. We need something similar for Worli. Or soon these little lanes and colourful boats will be things of the past, and glass and concrete will take over this part of the city too.
Posted by Deepa at Saturday, March 09, 2013 7 comments: