- By Aishwarya Pramod
My college, like a lot of other schools and colleges, organizes a ‘Traditional Day’ every year – a day when everybody dresses up in ‘traditional’ clothes, dances, eats good food and takes lots of pictures. 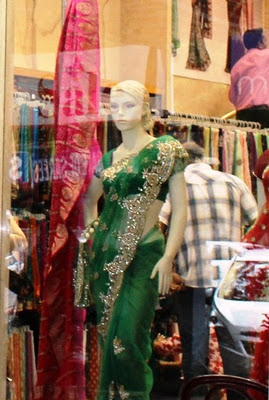 So why have a Traditional Day? Is it to celebrate our varied traditions? OK, that seems like a legitimate reason, but honestly I don’t know if it makes complete sense or not. Traditions change, some die out, and new ones are created through foreign influences and local changes. There are a lot of girls (including me) who combine jeans with T-shirts/western-style tops on some days, and kurtas on other days. Guys dress Western style, and wear kurtas less often than the girls. And on top of that, most people speak English 70-80% of the time, including outside classes (though this is only true of my college, not necessarily others). 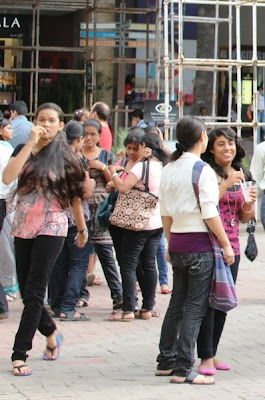 Sometimes Traditional Day just seems like an easy way to assuage the guilt we feel about being so Westernized. Living in Mumbai, we’re disconnected from the lives of the millions of Indians in rural and semi-rural areas. But ‘the heart of India is its villages’ - we get bombarded with this message all the time. So we want in on that too. Sometimes I feel like Urban Indian Guilt is similar to The Great White Guilt :) subtly filled into us through overt and subliminal media messages and societal expectations.
What’s the solution? Celebrating our traditions, by clinging on to saris and salwar kameezes that we don’t really wear otherwise?
Well, alright, it’s not even as if *I* know the solution to our East vs. West confusion; in fact, Traditional Day maybe a good solution for some. It’s not Traditional Day that bothers me but the attitude that accompanies it, the comfortable “I’m in touch with my roots and therefore better than you” smugness. The whole “I’ve found the perfect balance between tradition and modernity with my strapless saree blouse and sexy heels” is simply ridiculous. Priyanka Chopra in Dostana spends the entire movie in shorts or little dresses and then suddenly in a (rather pointless) song sequence, she emerges as the 'Desi' girl. So much like Traditional Day, OMG. 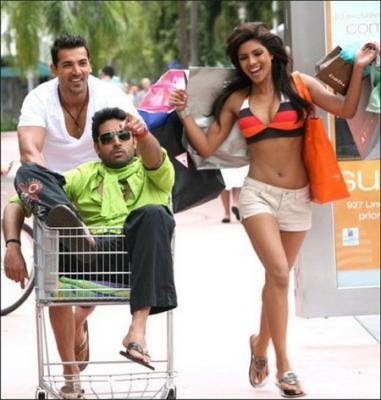 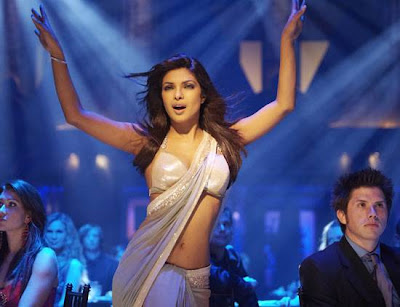 All of us in India (and for that matter the developing world) are constantly faced with the choice of east vs. west, tradition vs. ‘modernity’. And each of us makes different choices in response to this, based on our family background, upbringing, media influence, peer group, conscious choice, etc. And every individual’s choice is okay by me.
Let me finally clarify what exactly I’m getting at:
THERE IS NO PERFECT BALANCE.
THERE IS NO RIGHT AND WRONG.
There is no need to be either proud or ashamed.
I know people who wear western clothes 90% of the time, hardly speak in Hindi (or other Indian language), whose values are completely western; I know people at the other end, who are completely traditional and perfectly happy about it. And I know a bunch of people in the middle of these two extremes. All these choices are perfectly valid.
When I was 13, I went to camp. We were speaking to a camp instructor about our mother tongues and when he found out I wasn’t fluent in my father’s family’s language, Kannada, he immediately proceeded to tell me I should learn it and it was really sad and shameful I didn’t know it and that we should uphold our traditions and culture lest they die out.
Well. Firstly, culture is not a static concept that needs to be preserved or for that matter even can be preserved permanently. What I am today is the result of my upbringing – I was brought up near my mother’s family, so I speak Tamil. I’m not going to go out of my way to learn Kannada, just to ‘preserve’ culture. Instead, I’m the daughter of a Palakkad-Tamil mother and a Kannadiga father living in Mumbai who knows Tamil, Hindi, English and a smattering of Kannada.
And secondly, O venerable camp instructor, what about the fact that you’re wearing a shirt and trousers at the moment? How would you like it if someone came and told you you should be wearing kurta-pyjama and that you were helping destroy our culture? No, wait, not even kurta-pyjama, it should be angvastram-dhoti. :) I’m not judging YOU, am I? So please extend the same courtesy to me.
(I didn’t actually say any of these things to him, I just mumbled something and looked sheepish.)
So even though it’s all supposed to be relative, we all get judged every day. Either we’re too westernized and not ‘Indian’ enough, or we’re too ‘ghaati’ and not modern enough. I think this just reflects our lack of empathy. We don't want to understand others; we want to hang on to our little value judgements and preferences and impose them on others.
Sorry about this rant; for all its length it probably isn’t very coherent. That’s because my own thoughts on tradition and western influence aren’t very well formed. If there’s one thing I think I’ve conveyed clearly, it’s my confusion. Also, in the article I’ve focused on being judged for not being ‘rooted’ enough but there’s probably even more judgement on the other side – in certain circles, not being Westernized enough is social suicide.
I guess that’s what writing your opinion on the internet is all about, isn’t it? Putting your thoughts out there so anyone who wants to can berate the hell out of you. Oh well :)
Posted by Aishwarya Pramod at Wednesday, October 19, 2011 17 comments:

How to Buy a Saree Blouse

- By Deepa Krishnan
If you're female and Indian, there's one absolutely essential skill you must learn: how to buy the perfect blouse for a saree.
The Matching Centre is where you learn the ropes. It's almost a rite of passage, really. 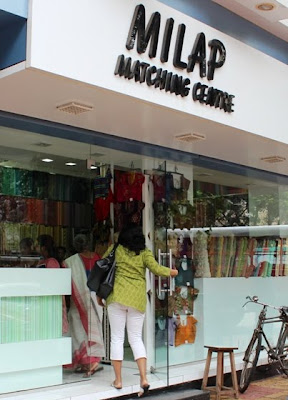 My mom and sister, entering the Matching Centre
In the early days, when you enter the Matching Centre, you're filled with a gnawing, groping uncertainty about what to buy. So many shades to choose from! How can there be *that* many shades of green? And which of those is best for my saree? Should I buy a blouse the colour of the main saree? Or should it be maroon, the colour of the saree's border? If I buy the green will it also work for that *other* saree, the one that aunt gifted me? Two-by-Two or Cotton? 80 cms or 1 metre? Should I get lining for this blouse? Will it be see-through? Will this colour run? Will silk be too hot? Aaarrgh. A million questions, plaguing the rookie blouse-buyer. 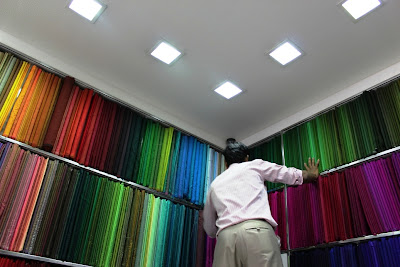 See how difficult it is?
But then, just as you lose all hope, help emerges - and it's usually in the form of an unassuming guy with an unerring eye for colour. Every Matching Centre has this miracle guy, with a quiet manner, who will take your saree from your hands, find the *perfect* fabric with the *perfect* shade of grey or green or whatever. All you have to do is stand there with a grateful expression, and fork out the money. 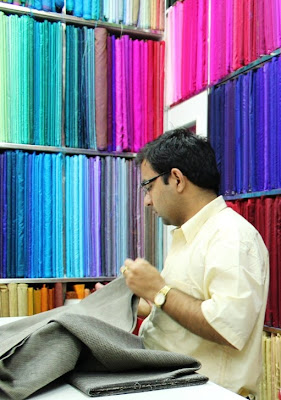 Mr. Know-it-all-but-will-never-get-cheeky-about-it
As time goes along, you become more confident. You find yourself saying somewhat firmly "Two-by-two will do just fine, thank you". "No, I do NOT think that's the perfect shade. It needs a little more purplish-brinjalish-rani-pink, really." At this point in your life, you will find even older aunts turning to you and asking, "Deepa, do you think this blue shade is ok?". And you step in, inspect the fabric critically, and say "Uh-uh. Nope. Not sky-blue enough. It's got to have more white in it. See that piece? Fourth from the left? That's the one you need". If you're proved right, and that indeed is the right shade of sky-blue, you feel a wave of confident smugness that nothing can quite beat!
But is that all? Of course not. The goal (ahem) is to get to the point where you actually find yourself expressing your personality through the blouse you buy. What? You didn't know? Yep. The saree blouse is all about personality, baby :)
And how does one express personality? By going beyond the plain single-colour blouses, of course. You have to start using patterns and borders and coordinating them with your sarees - with just that little edgy difference to keep it from becoming boring. You'll buy some disastrous stuff in the beginning - but eventually you'll get there. 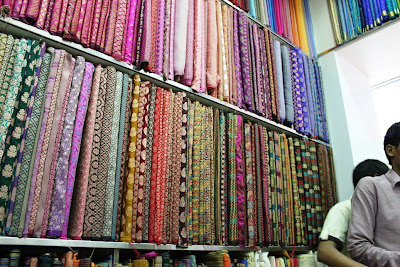 Some ghastly prints and some good ones 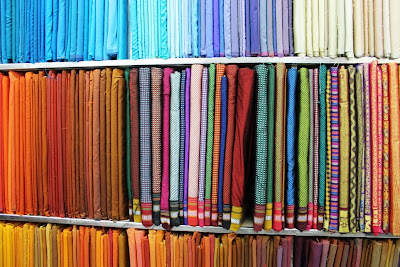 A nice but small selection of Maharashtrian khun 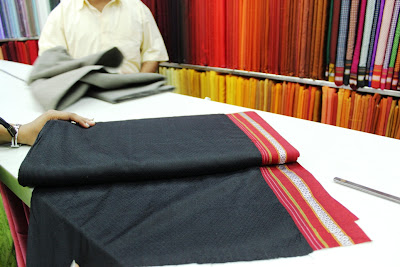 I bought this black and red one, to wear with a red Fab India saree.
Over time, you end up acquiring a set of printed blouses; and various combinations of plain sarees to wear with them. 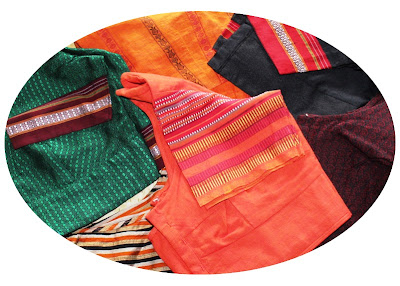 Small part of my blouse collection! 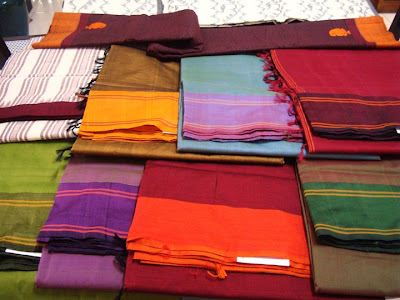 And some sarees that I team them up with 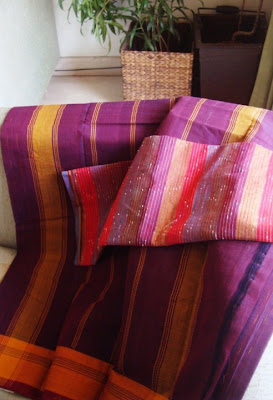 I like this purple and ochre cotton saree; and this blouse with slightly different but similar shades looks very good when worn with it.
And *then* as you start to experiment, as you start to mix and match and reconfigure your wardrobe, people stop saying "Hey, nice saree!" and start saying "Hey, nice combo!".
That, my friend, is how you know you have arrived in Blouse Heaven. When they start noticing the blouse fabric, you've done it. You've finally cracked the Art of Buying A Saree Blouse.
Posted by Deepa at Saturday, October 08, 2011 26 comments: