How to build an ethical design business?

I went to Kala Ghoda yesterday to meet a young man named Yazad. He is from LA, but is here in Mumbai now. The Parsi entrepreneurial streak is calling to Yazad, and he is plotting his own design label. He wants to launch a brand of ethical, sustainable clothing for millennials.

Just before meeting Yazad, I went to the new Translate store at Kala Ghoda, and I couldn't help thinking what a great learning ground this store is. Yazad could learn lots of things from this brand. 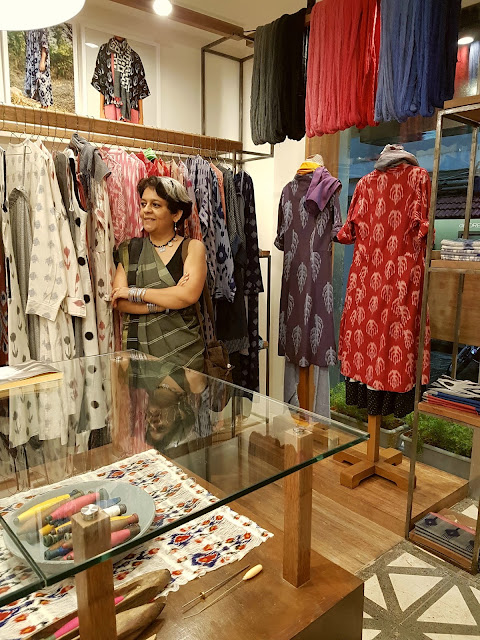 True to its name, Translate has taken the traditional technique of ikat, as woven in the village of Pochampally near Hyderabad, and translated that into something contemporary, innovative and stylish. Urban women can wear these clothes easily, confidently, in lots of different leisure contexts. Some of the shift dresses can be worn to work as well. Translate has taken care with design and finish; the quality is easily visible. The sizing and cuts are designed for real women, not impossibly skinny models.

Clearly, Translate knows their audience, and has managed to find a price point at which the business is able to thrive. And they have found a clear design identity niche as well: ikat for sophisticated urban tastes. After their initial days in Hyderabad, they have now expanded into Delhi, Mumbai and Ahmedabad.


Any successful design and clothing business, especially one that works with traditional crafts, needs a lot of different ingredients to work well. First, there is product creation itself. This kind of product cannot be done with just top-down design inputs from a designer. It is often is a collaborative process, with the realities of the craft interacting with the sensibilities of the designer.


But product creation is just the beginning of the story. I was telling Yazad last night that too many designers spend all their energy worrying about the product design. In the process, they forget to focus on the other things that make a sustainable commercial success.

It's hard for one person to have all the abilities to make everything work. But if you look at successful designers, you'll see that they all have sharp commercial acumen as well. They've managed to figure out how to finance their business. They've figured out pricing and margins. They've often started out with very low overhead costs, and only later taken on big fixed expenses. They've learnt the fine art of storytelling around their work, creating the necessary buzz (even when their marketing budgets were close to zero). These are fundamental entrepreneurial skills, which someone like Yazad has to cultivate if he is serious about getting into the design business.

The other big part of the story is ethics. Yazad wants to run an ethical business. In the design world, this means paying fair wages, giving credit where it is due, and not copying designs. It means following a fair pricing policy. It means upholding the laws of the land. It's really tough for anyone except an insider to figure out whether a business is being run on ethical lines. I'm sure for every ethical design house that exists, there many more pretenders.

Running an ethical business can be very difficult, simply because it often means your costs will be higher than those of competitors with fewer scruples. How does one survive in a situation like that? It may mean you need to accept lower margins for yourself. It may mean raising prices - but then customers must be convinced that your products offer them value for the premium that they pay you. What are you giving them, that someone else isn't? Designers must answer that question with brutal clarity if they want to succeed.

In the process, you must also define who you want as your customer. And who you don't.  Here's the thing: You cannot build an ethical business that will cater to *everyone*. Do not agonize over the ones who go away. Learn some equanimity.

My personal belief is that an ethical business can be built only when you don't really place money above all else. You need to be able to accept financial losses when ethics cost you money and customers. Sometimes really big setbacks will come and knock you off your feet. You have to pick yourself up and find the path again. If your value proposition is right, you will find that sweet spot, where customers and money will all come your way. But when push comes to shove, you have to be able to say, "This much is enough for me. More than this is greed. If I do this greedy thing, it will compromise what my brand stands for."

I hope Yazad will find his path to ethical success. I hope he will find this sweet spot.

Yazad is the nephew of my friend Gulserene. Last night we had dinner at Chetna at Kala Ghoda. Here are a couple of photos. By now I guess at least *some* of you want to see who this Yazad is. That's him in the maroon shirt. OK, OK, burgundy if you prefer :-) My friend Gulserene is the one with the arms folded on the table. We were chatting into the night, long after our plates were cleared. 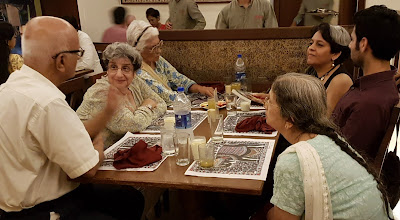 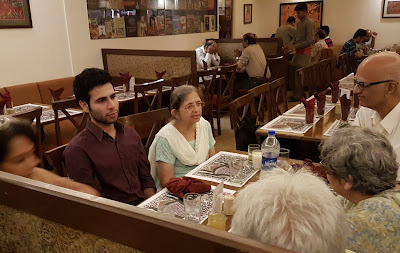 At last night's dinner, I had the privilege of listening to Dr. Sunil Pandya of KEM, who has been at the forefront of medical ethics in India. Dr. Pandya's wife Shubha - sitting just across from me - is also a doctor (her area is leprosy); and she has a PhD in history as well. Next to Yazad is Dr. Lopa Patel, again from KEM, whose research work on cancer has generated much controversy. She has stood firm by her beliefs. What an amazing set of people, each making a difference to the world in their own way. Gulserene made a documentary on KEM, called "Getting Better" - and she is the thread that tied us all together. More about her documentary in some other post, perhaps!
Posted by Deepa at Saturday, July 15, 2017 13 comments:

In the late 1700's and early 1800's, Jews from Iraq began arriving in Calcutta and Mumbai.

It was not the first time Arabic speaking Jews had made their presence felt in India. The Great Mughal Akbar had a Jew in his court, and so did some subsequent Mughal emperors. Surat was one of the major ports of the Mughal empire, and Jewish merchants were well-established there, trading with the British East India Company.

As Mumbai prospered in the 1800's, Jews from Iraq, Syria, Afghanistan and Yemen began arriving in Mumbai in significant numbers. A lot of them came from Iraq, and so they were called Baghdadi Jews.

There was already another Jewish community in Mumbai, the Bene-Israel (Children of Israel). Believed to be one of the "ten lost tribes" of Israel, they had been in India for many centuries. The Bene-Israel were quite different from the Baghdadis - they spoke Marathi, and looked more Indian than Middle-Eastern. After many centuries in Maharashtra, Bene-Israeli cuisine had become localised, while the Baghdadi Jews followed their own cuisine. The prayer rituals of the Bene-Israel were also different from those of the Baghdadis. The two communities therefore, maintained a cultural distance, and did not intermarry.

In the initial years, the Baghdadis were few in number, and they prayed at the synagogues of the Bene Israeli community.  But as their numbers grew, they began to want their own synagogue in Mumbai.

Two factors made this dream a possibility. The first was the arrival of the wealthy Sassoon family of Baghdadi Jews in 1832. The second was the opening of the opium trade in the 1840's which allowed the Sassoons to amass huge fortunes. As their wealth multiplied to astronomical levels, the Sassoon family naturally became the de facto leaders of the Baghdadi community. Building a Baghdadi synagogue was an obvious logical demonstration of that leadership. The patriarch David Sassoon was a practising Jew, who observed the shabbath throughout his life.

In 1857, while the country erupted in flames of revolt against the East India Company, David Sassoon moved ahead with plans for the first Baghdadi synagogue in India. The Sassoon family owned land in Byculla. A plot was identified and architectural design commenced. The design selected for the synagogue was Western-inspired architecture, rather than Middle-Eastern or Indian. Perhaps it was because the Sassoons were quite well-aligned with the British. While David Sassoon did not speak a word of English, his three sons did, and they wore both traditional and Western clothes. 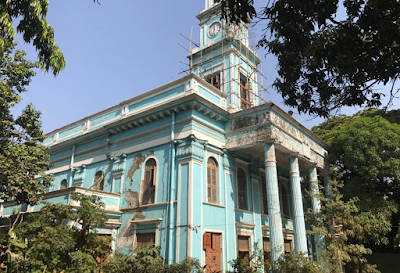 Construction progressed quickly. In 1861, the synagogue was consecrated, and named Magen David, Shield of David. It was the largest synagogue in Asia at the time. A few years later, the Sassoons built the Ohel David in Pune, which I think is even larger, although I cannot tell for sure. 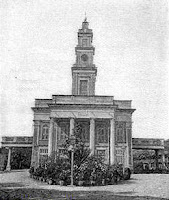 Here's an old photo of Magen David synagogue. In the 1900's as the Baghdadi congregation grew, extensions were added on both sides, which are missing in the old photo. But you can see the extensions in this illustration below, which I got from the Sassoon Trust website.

I have visited Magen David on and off in the past 10 years. It used to be cream/white in colour, as the illustration shows.

Somewhere in 2008, it was painted an attractive blue and white colour. Blue is the identifying colour of Judaism, just as the saffron colour identifies Hinduism. In the Torah, the Israelites were told to dye a thread on their tassels with tekhelet, a blue ink from a sea creature, perhaps a type of cuttlefish. The Israeli flag is also blue-and-white (actually tekhelet is supposed to be a dark almost violet-blue).

When you stand in front of the synagogue, the most obvious architectural aspect that strikes you is the flat-roofed porch supported by four columns. The entablature contains the name of the synagogue in English, and there is a tablet showing the ten commandments in Hebrew. 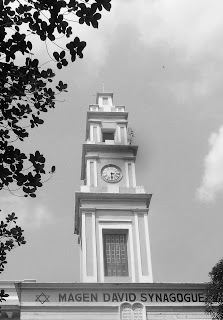 If you step back a little from the synagogue, you can appreciate the central stepped tower. The tower is inspired by a similar one in Trafalgar Square, London. The one in London is called St. Martin in the Fields, you can see it here. There's a clock on the tower that was brought from London. It was an era when everyone did not have the money to own a pocket-watch; so public buildings had clocks to help the populace figure out the time.

Here a photo of the interior: 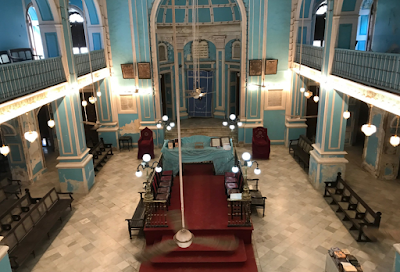 This is the view from the first floor, which is the women's area. The synagogue has separate seating for men and women, as required by halakha (Jewish religious laws). While gender separation has been a part of orthodox Judaism, there have been many reform movements trying to change the requirements. Particularly in Jerusalem, it's interesting to see how the orthodox control over the sacred Wailing Wall of Jerusalem is being contested by the "Women of the Wall"  They have been fighting for equal right to access and pray at this holy site.

Photo credits: Top and bottom photo from Garry Joseph, who did our Jewish Heritage tour
Posted by Deepa at Sunday, July 02, 2017 4 comments: