One of the happy delights of the rainy season is that Prakash at Shivaji Park has their fasting menu in place.
There's usually a queue of people waiting for a table. So you'll have plenty of time to admire the beautiful art-deco grillework in the balcony above, while you join the queue!

I went last week, mercifully before the crowd came in. And I ordered this wonderful thing called Upvasache Bhagar.
Have you tasted bhagar? It is light, nourishing and delicious. It is served with a slightly sweetned yoghurt, which sets off the green chilli spice in the bhagar quite nicely. Ideal for breakfast, especially if you don't like super-spicy things early in the morning.

Bhagar (vari tandul) comes from the seed of a wild grass. It's often called jungle rice, although it is not really rice. It is a seed which grows widely in Asia. Since it is not a grain, by the complex rules of Hindu fasts, bhagar is among the list of permitted foods that you can eat in the fasting season.
To make upvasache bhagar, usually jungle rice is cooked along with rajgira (amaranth, yet another "permitted" seed). Boiled potatoes are also added to give it some mass. Crushed peanuts, green chillies, cumin, lemon, coriander and ghee - these are the things that make bhagar delicious. It is a simple recipe, and works very well.
If you want to try making it at home, you can use this great recipe from The Cook's Cottage. At the risk of offending purists, I would suggest trying your own variations. If you are making it for 4 p.m. "tiffin", then increase the spice levels and serve with masala chai! I think it would taste great with peas and carrots added to it. Or even sauteed capsicum. I think saw a version online with bhopla in it, but I find the idea very yewww.

For those who want the dish without the effort of cooking it, there's always Prakash. It's very close to my office, so please give me a shout and I'll gladly join you.

P.S. While you're there, try their thalipeeth as well. I'm addicted to it.
Posted by Deepa at Saturday, September 22, 2012 9 comments:

In which I watch trees being cut

The area outside my office has dense green tree cover, keeping the entire street cool and shady, and protecting us from sun and rain.


Today when I drove up to work, I found a tree-felling operation in progress: 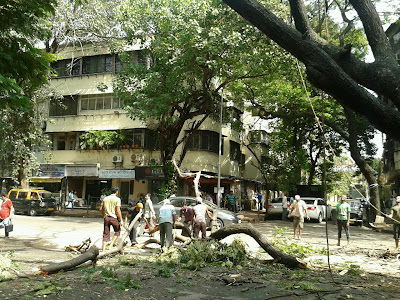 
Our local istriwallah agreed, and gave me some rustic advice "Jhaad andar sey sad gaya hai madam", he said. "Bahut dino se baas aa raha hai". Apparently, you can smell a rotten tree in the rains. I do not know if this little piece of dehati wisdom is true, because I couldn't smell anything strange.

But in any case, the cutting had begun. There was a man on top of a dead branch (can you see him in the photo below?), hacking away with a small axe. They had tied ropes to the branch. When it weakened, guys standing below would tug on the ropes and the branch would come crashing down. 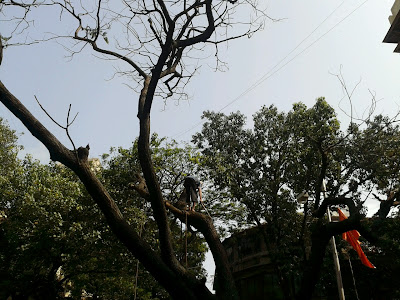 Along with this dead tree, several other trees were being trimmed, based on requests made by residents of a nearby building. A couple of months ago, a branch from one of the trees fell down and dented a car. So that's why the municipality had been called in.

I stood and watched as big branches came crashing down all over the street. It felt terrible, really, even if one tree was supposedly dead, the rest were still alive and were being trimmed with gusto. Once a big branch had been brought down, it was then chopped into little bits. The tools used were basic: sickles to cut off small portions, and two-man saws for larger trunks. Every now and then, the saw would need to be sharpened. 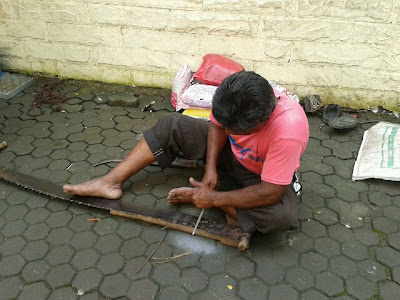 And then they would get back to the job of breaking up the branches: 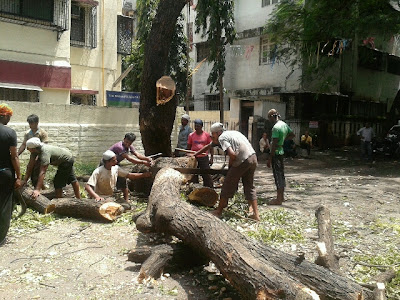 The cutting went on all through the morning, from 9 am to nearly noon. In between, they took a break for sweet milky tea, sponsored by the local chaiwalla.


Eventually around 1:00, I went outside to check on the status. The entire set of trees on our street had been decimated. There used to be a pretty green canopy on my street earlier, but now it looked grim and bare. 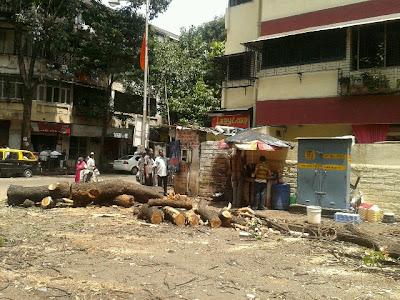 A sorry morning, really, all in all. So much beauty lost. I am wondering how to plant another tree. Do you know any organisations that can help?
Posted by Deepa at Wednesday, September 12, 2012 9 comments:

Lessons for Mumbai from the 6th Century BC

On my morning walk, I passed by the Jain temple in our neighbourhood. It was a beautiful calming sight.

I paused for a few minutes to think of Mahavira, the founder of the Jain religion, who preached what is perhaps the most relevant message for our times: tolerance for multiple views.

Mahavira's philosophy of anekantvad  - which translates literally to "multiple-view-ism" - is central to the Jain doctrine. In its most basic form, anekantvad means that there are multiple perceptions of Truth, and that no single point of view can be considered absolutely right. Quite different from dogmatic religions that insist it's "my way or the highway"!

In its more sophisticated philosophical interpretations, what anekantvad really says is that the universe and everything in it, i.e. the objects of our perception, are infinite in their qualities. Whereas human perception is finite, and what's more, each human's perceptions are different based on the filter through which they see the world. In fact, because no two people are identical, there are as many different perceptions of the world, as there are people! Thus, it is impossible for a single human being to completely grasp all aspects and manifestations of the universe and Truth.

Given this situation, a very refined or nuanced approach to the world is needed, which is called syadvad - conditional perception. Syadvad literally translates to "maybe-ism", and what it suggests is that when we make a statement about the world, we don't present it as dogma and absolute truth; instead we add "syad" to it, i.e. perspective.

Thus, whenever we say something, we preface it by saying it is from one particular perspective. This allows room for other views. It's like the blind men and the elephant. We need the humility to accept that we may be only grasping the tail or the ear :)
I cannot help liking the anekantvad/syadvad approach, although I know I often present my beliefs very forcefully. Most of us are articulate lobbyists and passionate about one cause or the other. It is quite a giant leap to go from forceful debate to the kind of gentle approach that syadvad calls for. When we are  very forceful about what we believe in, and thrust it upon others, we are in reality refusing to accept the richness of the many world views that are around us. And we are being driven by ego, by the urge to be listened to and obeyed.

It is really quite a fine line to walk. We must live in this world, and act upon our beliefs, but we also must give room and respect to other beliefs, even when they are very much in opposition to our own. How does one do that? Especially when some things make your blood boil? Food for thought, especially in this city where a new strain of intolerance seems to be gaining ground!!

For those who don't know - Mahavira, or The Great Valiant One, is the name given to the sage Vardhamana, who lived in the 6th century BC in what is now Bihar. The faith which he propounded - Jainism - received royal patronage from the Maurya kings, and spread all over India, including large tracts of South India. In Tamil Nadu, Mahavira is called Arugan.

Jainism as a faith is much older than Mahavira, who is the 24th in a long line of Jain sages. But it was Mahavira, who lived a long and fruitful 72 years, who popularised the religion by formally expounding its tenets.
There are several Jain temples in India, and I highly recommend you visit one of the temples if you are coming to India. Almost all of them are beautifully carved and embellished, and the insides of the temples are worth seeing. You will usually be able to see not just Mahavira, but also the 24 sages, called tirthankaras, who came before him.

Jains believe that these tirthankaras, the Enlightened Ones, the Kevala Gyanis, have been able to see the rich complexity of Truth in all its manifold aspects. Maybe they will inspire you as well :)
Photo source for "blind men and the elephant": http://abearsrant.com/2013/03/the-elephant-in-the-room.html/samsung-digital-camera
Posted by Deepa at Sunday, September 09, 2012 6 comments: