This month Condé Nast Traveller voted Mumbai, Chicago and Buenos Aires as top buzz-worthy destinations. And Mumbai Magic is the only tour company listed in the article, yayy!

We're Off To Mumbai, Chicago, and Buenos Aires
by Eimear Lynch | Published April 2010
Our top picks for the biggest-value buzz-worthy destinations worldwide. Get 'em while they're hot.
Posted by Deepa at Tuesday, March 30, 2010 2 comments:

- By Aishwarya Pramod
This year I started travelling by local train for the first time.

Throughout my school days, I'd been a princess going back and forth everyday by car, and this continued for the first few days of college as well. (In my defence, I never asked for the car. My parents insisted I be driven to college and back, honest!).
But then I felt the need to travel by local train, simply because I needed to have an option in case I could not go by car.

So I asked a classmate, who I knew lived close to where I lived, and she agreed to come with me to the station (V.T.) and show me which trains I could get on, and where to get off. 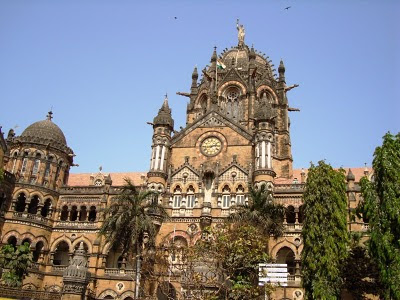 VT Station, from where my journey back home after college begins 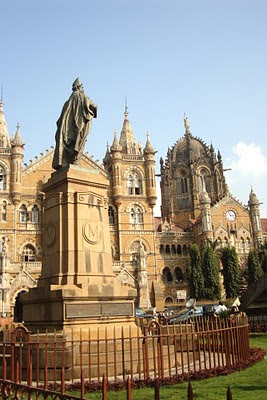 View of station as we approach from my college 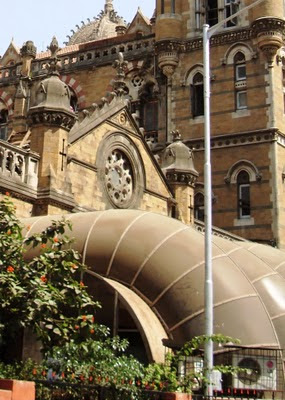 Subway entrance to get to VT Station
The train journey was very interesting the first time. In the compartment (Second Class Ladies) there were all sorts - fisherwomen chatting loudly, squatting at the entrance; college students, listening to music on earphones, burka-clad ladies and schoolgirls wearing headscarves.

Vendors selling chips, samosas, bhel puri and others selling clips, stickers, bangles, earrings got on. My friend and I looked at some earrings together.

A blind man got on, singing a devotional song and walked through the compartment. A woman followed him, holding a tin where people deposited coins.
It wasn't very crowded, and only a few people were standing in the compartment. Most of the others had places to sit, though in most cases 4 women were squeezed into a seat meant for 3.

The ones standing asked, "Kahaan utarna hai?" to the ones sitting. Where will you get off the train? The sitting ones told them where they would get off, and thus those standing reserved places for themselves after the ones sitting got off.
At Wadala Road, the station before mine (and hers), we got up and went to the door. At the next station we jumped off, and on the platform pulled free of a pocket of ladies trying to board the same train we had got off from.

It was time to walk home. My friend took the bus as she lived a little distance away. I was feeling confident about the train journey and looked forward to it the next day.
But immediately the next day, that girl didn't come to college. I was left to find my train on my own. I got onto the wrong train, and at Byculla station, I asked the lady next to me "Agla station GTB hai na?" (The next station is GTB, yes?)
She said, "Arre, yeh gaadi GTB nahi jaati. Utar jao, tumko waapas jaana hoga." (No, this train doesn't go to GTB; you better get off this train and go back)
I didn't know how to go back and what to do after that, but I didn't want to ask (I didn't want to look ignorant :P ... stupid, I know!). So I got off at the next station and took a taxi home, feeling pathetic.
But that was a long time ago. Now I'm more familiar with the trains. I can catch trains both on the Central line and the Harbour line, because my house is located near 2 stations - GTB Nagar and Sion.

Sometimes while travelling with friends, we take the General Compartment where both men and women are allowed to travel. We usually take First Class... I took the General Second Class Compartment once and I don't want to do it again (This involves an embarassing incident where I accidentally groped a man's chest - I was standing near the seat and I thought it was my bag but I turned around to find a very affronted-looking Sardarji. I mumbled a sorry and ran for the door. This only happened cos the Second Class Compartment was more crowded, and because I was talking to a friend and didn't concentrate on what I was doing!!). 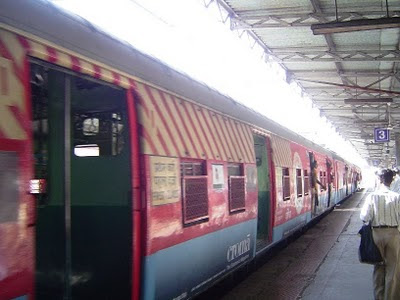 First Class Compartment. Further down is Second Class, where you can see people hanging out of the door.
Many days when I've had to stay back late in college either because of lectures or other work, I prefer to take the train home, rather than asking the driver to wait. So that happens around two or three days a week. Now I also have a rail pass for the Central line - First Class.

I can't make any claims to be a veteran/seasoned commuter but after a year of college, I'm no newbie either!

Pigging out at Elco Arcade

I'm quite certain there are two women for every man you see on Hill Road. It's all the shopping, you see? Makes for a skewed gender ratio!

But for me, what makes this chaotic experience extra-special is this: the restaurant at at Elco Arcade! 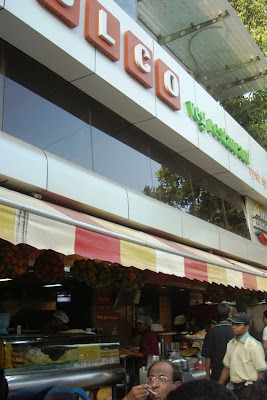 Home of the special pani puri, Elco is a destination unto itself, a fast-food Mecca, so to speak.

Space is at a premium, given the almost permanent crowds. So the management cleverly uses little red stools. Whether you're out with the whole family, or just with a friend, the stools lend themselves to amazingly creative configurations, doubling up as both tables and chairs. And if you're dating someone, the stools allow you to cozy up. Who wants a big table in between? 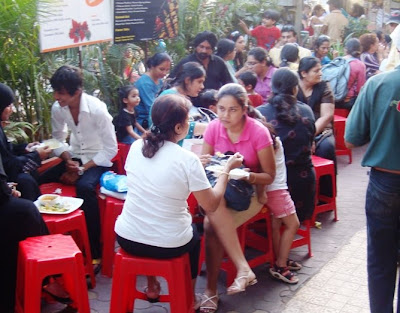 One of my little pleasures at Elco is sharing food. When you order something, you can say "Five spoons, please!" - and the waiters understand perfectly. When the item is served, you plonk it on a common stool, share it with friends, and when you've polished it off, you then order the next interesting thing. This sort of sequential ordering and eating works because the waiters are lightning fast, everything is served ultra-quick, and there is hardly any thumb-twiddling. Here are three happy shoppers digging into a shared sev-puri. 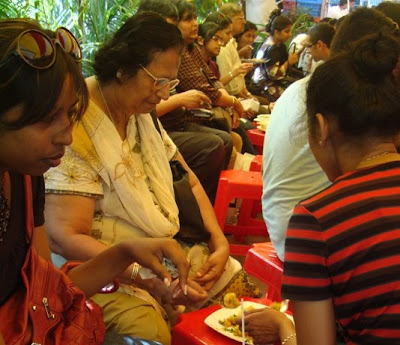 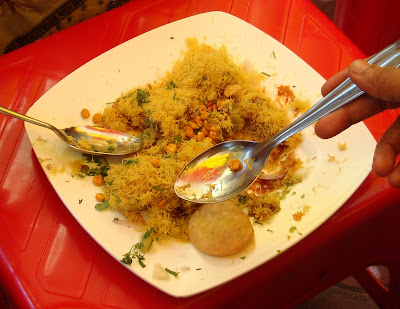 But sev-puri is not Elco's trademark dish. It is the pani puri that catapulted Elco from a small street-side stall into a thriving restaurant. There are 2 pani-puri counters, and as the guy at your counter works his magic, your entire system floods with anticipation. Little crisp puris with their spicy-tangy-sweet fillings...aah...you can barely wait. In fact, look at the careful concentration on the girl's face in the photo below :) 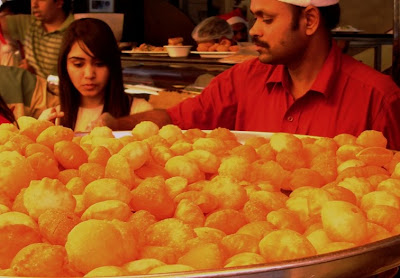 While the pani-puris are really good, my favourite at Elco is their pav bhaji. This is the only place in the city that I know which serves pav bhaji along with dahi-vada and a gulab jamun. I remember how surprised and pleased I was the very first time I got it! It was an unexpected bonus, and one that made perfect sense to me. The dahi-vada is cooling on the palate after the spicy pav bhaji, and the gulab jamun rounds off the meal delightfully.

This is my cousin Sheela with the cheese pav bhaji that she and I shared. She was visiting from Malaysia, and I decided she should experience the delights of Elco. The entire plate was sinful, yes, but worth every calorie. When you come to Elco you really need to check in your diet at the door. 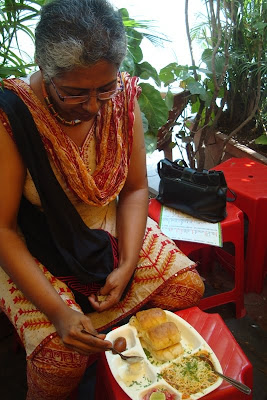 This Sunday I went back to Elco. Sheela's brother Juggi was visiting from the US, and so five of us piled into our Innova and went to Elco. It was quite warm outside, so we were ushered upstairs - where to my surprise, there was a very modern-looking, air-conditioned space. Not surprisingly, here too, there were more women than men. 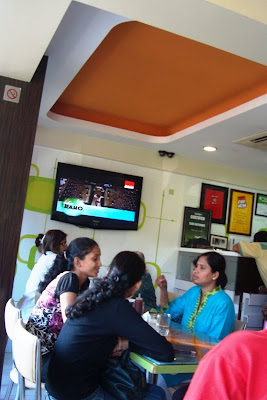 We ordered five different dishes, and we shared it between us. I managed to click photos of my bhelpuri and my mom's dahi-puri before they vanished in an all-out attack by five spoons.

The bhel was just the way I like it - with little slices of green mango to add that extra tang. 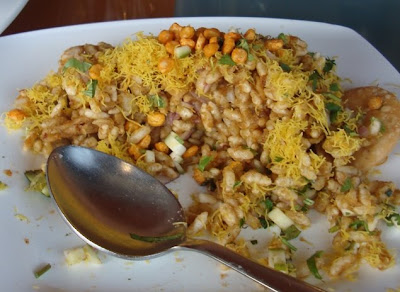 My mom loved the dahi-puri, but Aishwarya didn't. She thought the dahi was too sweet. 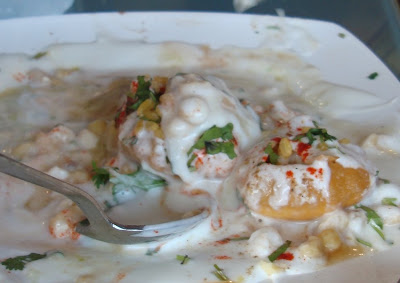 We polished off the whole affair with mango-kulfi (yes! it's that time of the year! the Alfonsos have started to arrive!) and falooda, before heading off to Carter Road to watch a street play (more of that later perhaps).

The menu at Elco has many more interesting things that I have not yet tasted. Makai Pattice, Basket Chaat, Double Chaska (whatever that is!), Tava Aloo Chaat...take a look. 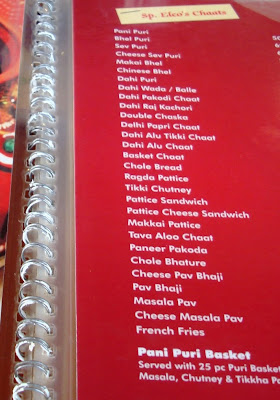 - by Aishwarya Pramod
Up until I was 5 years old, I spent most of my time at my grandparents' place. My mom was a working woman and during the day time my grandmother and grandfather looked after me.
Their house was on the ground floor of a set of apartments, in a small lane behind Roopam cinema (now Cinemax Sion). One of my earliest memories is of a tree, growing near the gate of my grandparents’ building. The strange little flowers on that tree spread a red carpet on the ground. And in and around that tree, there were tons of sparrows. Sparrows hopping around (when moving on the ground, they prefer to hop instead of walk), sparrows scolding angrily, sparrows flitting busily about the whole building. 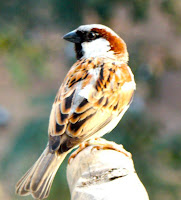 When I was almost 6, we went to live in Chennai. When I came back to Mumbai seven years later, I saw that the tree was gone and only a few sparrows were in sight.

I wondered where they all had gone. I wondered if it was only from our building that they disappeared, or from all of Mumbai?

The answer, I found out from newspapers, is that the little birds have dropped in population drastically - more than 50 percent- since the time I was last here.

Sparrows are tough city birds, but in Mumbai, they've been subjected to an unholy combination of challenges that has broken their hardy backs.

For one, they have fewer places to nest now. The old, traditional houses had lots of hidey holes and protected crevices for sparrows to make their nests. Box style flats have fewer of these spaces. 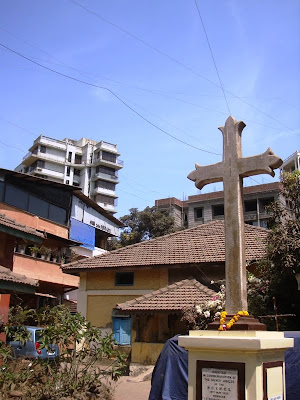 Traditional roofed housing in Bandra -
But these old enclaves are disappearing fast. In the background you can see new modern style concrete housing. 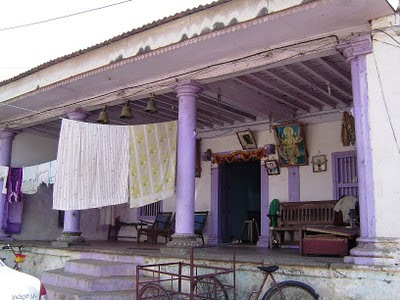 A fisherman's old-style home in Worli Fishing Village.
This sort of house has lots of nooks and crannies where sparrows love to build their nests.
Another surprising reason is the introduction of unleaded petrol. When unleaded petrol combusts, it releases compounds that kill insects, which are an important food source for baby sparrows.

Radiation from mobile towers also affects the reproductive and nervous systems of sparrows. Their babies have high mortality rates and many of them are born with serious deformities.

Pigeons, crows and other bigger birds are serious competition.

City folks don't dry grain out in the open as much as they used to, so sparrows can't steal grain from here (another important food source gone).

Surely, the sparrow is disappearing from the city. This is a bird that has characterized not only my childhood, but that of many others in Mumbai. Perhaps the disappearance of the sparrow indicates the passing of an old way of life in Mumbai. Or maybe Mumbai was always rapidly changing, and I just didn't notice it when I was 5 years old.
Posted by Aishwarya Pramod at Saturday, March 06, 2010 22 comments: