A couple of days ago, I went to the 'Discovery of India' exhibit at the Nehru Centre. I came away loving the feel of the place!

The Nehru Centre was conceived in 1979. So everything, from the exterior architecture to the exhibit design, has a very 80's feel to it - neither too modern, nor too old-fashioned (er, just like me?). Anyway, it took me back to my school days; and reminded me of a quieter Mumbai, with lesser traffic, fewer people, and more open spaces. 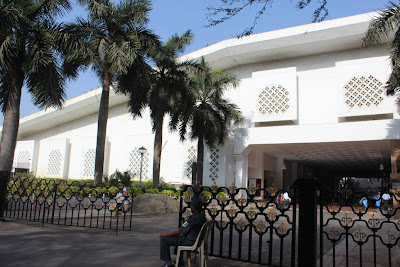 Exterior of Nehru Centre, Worli, Mumbai
The first thing I noticed when I went through the gate was this sculpture, nicely positioned between two trees. 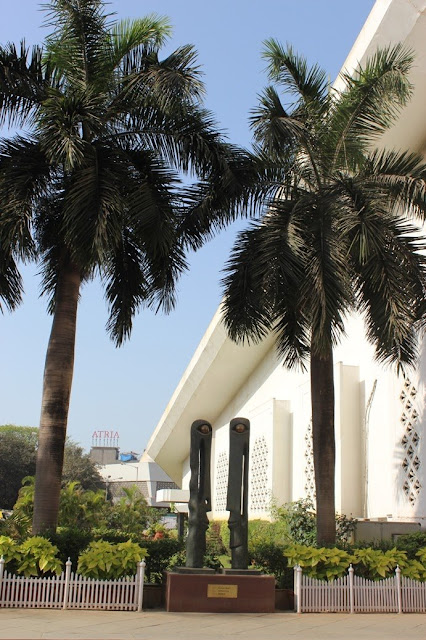 "Attraction" by Paresh Maity
“My interaction with art began in Bengal when I would stand and watch idols being prepared for the Puja,” said Paresh Maity in a recent interview with Business Standard. “That was the beginning of my inspiration.”. Inspired or otherwise, I rather enjoyed the quiet conversation of these two stone creations, focused entirely on each other :) There were several other installations nearby, but I did not have the time to go look at them.

We walked inside into a cool area, and found the cleaning staff signing off for the day. 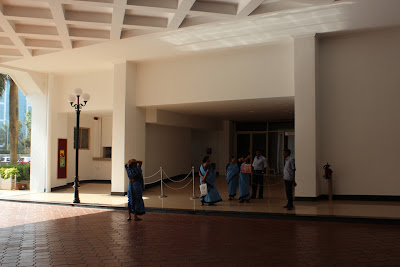 Lazy afternoon; the cleaning staff in their blue sarees 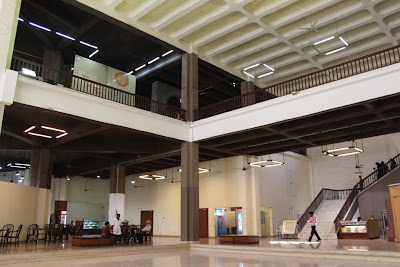 When you enter the building, you see a large open space, with a staircase leading up (on the right). The Discovery of India exhibit is on the first floor.

Immediately to the right, before the staircase, is a model of the HMS Trincomalee, built at the Mumbai docks by the Wadia shipping family. The Trincomalee is Britain's oldest warship still afloat (after nearly 200 years)! Master shipbuilder Jamsetjee Bomanjee Wadia supervised its construction in the early 1800's. It was one of 14 ships built for the Royal navy during Wadia's life. An engraved silver nail was hammered into the keel to ensure the vessel's well-being (ha! maybe that's why it's still afloat!). 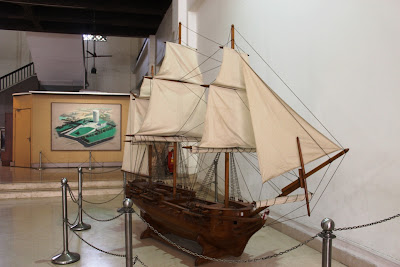 Model of the Trincomalee in the lobby
Actually - the real reason it hasn't fallen apart is probably that unlike most ships of that time, which were built using oakwood, the Trincomalee was built using Malabar teak. It is a particularly hardy wood. And a lot of money has gone into restoring the ship, which is currently a museum exhibit in the UK. Here's a photo from the real ship, from Hartlepool (North East of England). 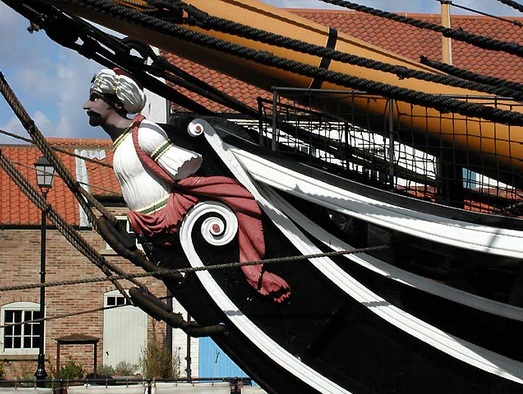 Beautiful teak-wood, restored lovingly. There is a Maratha figure on the busthead, acknowledging the ship's origins in Bombay. Photo from website of HMS Trincomalee

The Wadia family continued to build over a 100 ships for Britain, becoming the leading family in the development of Bombay's shipbuilding industry. I'm glad the Nehru Centre offers this tribute to them.

Passing the ship, we walked upstairs to the Discovery of India exhibit. It is a summary of 5000 years of Indian history. And although the story is complicated, it is told exceedingly well. If you have a child, and you're just introducing him or her to India, I can't think of a better way to do it.

The exhibit is divided into sections, starting with the prehistoric, and then going on to the Harappan civilisation, the Golden Age of the first millennium, right up to Indian independence. It is really too much to do in one day, especially if you have a child with you, but you can spread it over 2 or 3 visits, as a story-telling session. The displays are interesting and interactive, visually pleasing, stimulating all the senses. Yes, it is from the 1980's, so you don't have touch-screens and what not, but it's still very interesting. For example, at the very beginning - the very first exhibit they have is a dome covered with stars and you stand under it, and you can hear from the Rig Veda, the hymn to the Creation of the Universe. Nice, no? I certainly loved it. If you want to hear what I heard, here is a link to the Sanskrit chant and the translation as well.

Here's a photo from the last display section, during British rule, it depicts the city of Calcutta, its bazaars, people and buildings. It is a 3-dimensional exhibit with cut-outs and props: see how nicely it is done? 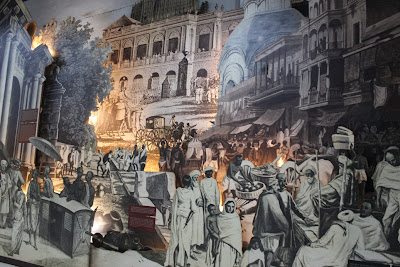 Calcutta's "White Town" and "Black Town", both beautifully depicted
Seriously, the most appealing thing about the Discovery of India is that someone with intelligence, creativity and a great deal of knowledge has put it together. I don't who it was, but here's a little salute to them! I went with three guests from the USA; they were going on a long trip all over India, and for them, this was a great introduction to all the things they could expect ahead of them. 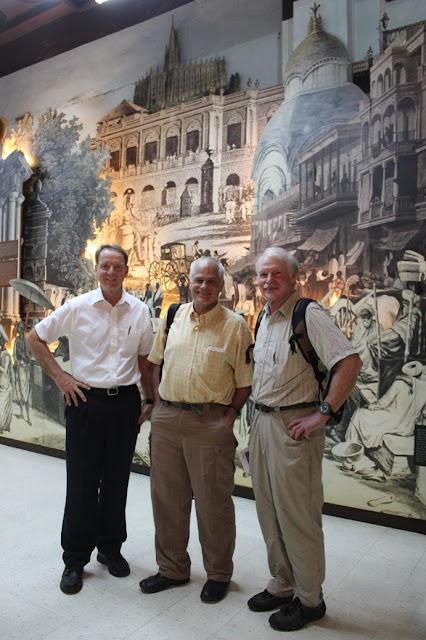 Here's wishing you happy discoveries ahead, Roger, Alan and Richard!