Van Ruith and the Western gaze

Horace van Ruith, a painter of German origin, arrived in Bombay in the late 1800's. He stayed in Cumballa Hill and established a studio there, at what was called the Cumballa Hill Family Hotel (which is now the Parsee General Hospital). Van Ruith painted landscapes, as well as portraits. But his career really took off when he started to do these Oriental scenes, and found patronage from Indian royalty as well as Prince Arthur, Duke of Connaught. 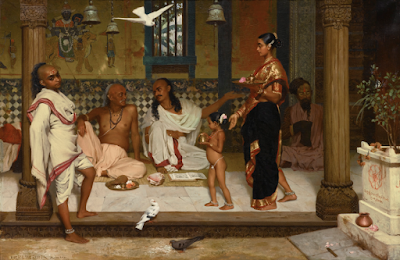 The painting above is of a Brahmin household, says Sotheby's. To me it looks more like a small local temple courtyard, given the sadhu sitting in the corner, the tiling on the wall, the temple bells and the woman returning after offering prayer. Perhaps it is a small shrine, part of a nobleman's large private wada.

I liked all the little details in the picture; they are so very real and authentic. No foreigner could paint these from memory, so I am sure there was a photo or a series of photos for reference. Photography had come to India by the 1840's, and since no such family scene could have possibly been caught on camera, it is likely that this picture was 'made up' from some photographs of a more public location, combined with the painter's imagination. It is still a commendable piece that portrays small details perfectly.

Of course, like all paintings of the "exotic Orient", this one too leaves me somewhat troubled. When I see my culture represented via a Western Gaze, it's as if someone else has taken over the narrative, and I am seeing myself through their eyes, in a way that I may not particularly agree with.

What is this Gaze thing, and why does it matter? My cousin Lavanya recently said something about "The Gaze", which I found interesting.
Gaze: to look fixedly, intently, or deliberately at something.
The gaze has acquired different meanings in different disciplinary contexts. The Medical gaze which is the examining gaze, diagnoses and pathologizes. The Scientific gaze depersonalises, the Sociologists’ gaze diagnoses [society], the Anthropologists’ gaze [often] patronises, [sometimes] museumises, the Poetic gaze renders soulful, the Imperial gaze infantalises and talks down to subjects, the Supremacist gaze makes binaries of us and them...

This painting to me represents a Western gaze, the gaze of an outsider who sees something strange and mysterious and seeks to portray it that way. The problem with this is that when framed through the eyes of colonizers, complex cultures are often reduced to exotic stereotypes ... for example, if I were to ask you to describe Brahmin society on the basis of this particular painting, what words would you use? To me it seems to show a very idle community (see the sprawled, relaxed posture of the two men). Yet it seems to be a prosperous community (note the prosperous, healthy boy and his jewellery), using strange books and ritualistic paraphernalia to make their living in the world. It is a patriarchal community as well, with a little girl being trained in the ways of her dutiful mother (she with the downcast eyes). It's easy to see how such a portrayal may help build an image of a slothful and backward society that needs to be saved by Jesus, or reformed through colonialism.

Whether you agree with van Ruith's portrayal of Brahmin society or not, in the end, such exotic stereotypes end up creating "others" versus "us". 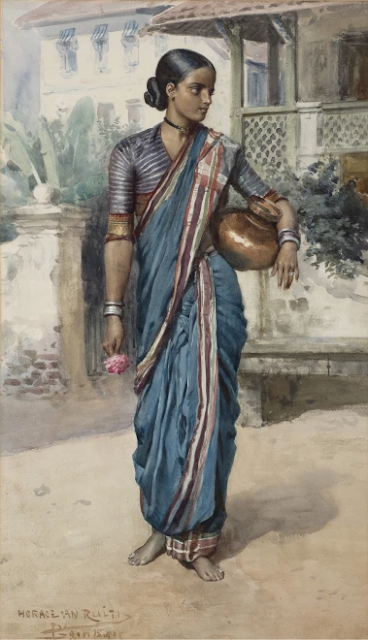 In this painting, a Maharashtrian woman is portrayed somewhat pensively, delicately, suggesting that she is as soft as the flower she is carrying. This then, is the Male gaze, depicting women and the world, from a masculine, heterosexual perspective. From the khuna blouse to the Narayanpet saree, to the hair tightly done in an amboda, this one is so real. But if you have ever carried a pot of water in a heavy copper pot, then you'll know that it takes strength. However, male representations do not usually reflect the strength of the woman. And we, the viewers, both male and female, internalize this male gaze, and begin seeing ourselves thus.

Raja Ravi Varma greatly admired van Ruith's work, and a whole generation of Indians have internalised Ravi Varma's portrayals of soft, vulnerable, Indian women.
I don't have anything against either van Ruith or Ravi Varma, or the way in which they portrayed what they did. All humans have a gaze. If you want to tell a story about someone, you need to adopt a gaze; and they adopted what came naturally to them. But my personal view is that in portraiture at least, if a story-teller begins from a point of empathy, it would perhaps help tell the story in a more authentic way. The starting point for any portrait artist is to be aware of their own gaze, and how that impacts the portrayal they are about to undertake.

I am myself a story-teller; I write about the people of India. My travels in India take me to so many different cultures and communities. Seeing van Ruith's work has come as a good reminder to check my own gaze from time to time! I now am becoming acutely aware of my own gaze, and how difficult it is to tell a story without altering it to suit my imagined worldview.