For all of you who mailed me

For all of you who mailed me, I can't tell you how moved I am by the concern and care pouring in from all corners of the world. I have had emails yesterday from Australia, Japan, France, Germany, Spain, UK, USA, South Africa...and the messages still continue to pour in this morning.
.
Those who have visited Mumbai in the past, and seen it through the eyes of Mumbai Magic tours, are expressing not just shock, but distress. "I am just heartbroken that this is happening to your wonderful city" are the words of a lady who went of one of the tours last month.
.
Many of my work colleagues from Barclays, who stayed often at the Oberoi and Trident while we were working at the Nariman Point office, have expressed disbelief at what's happening. How can this quietly efficient luxury hotel be the site of so much violence, they ask. 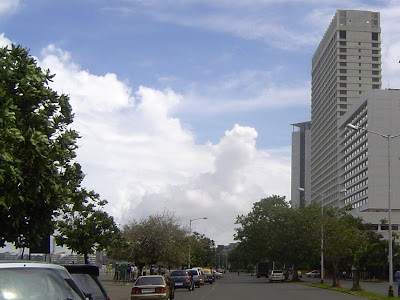 People who are planning to visit Mumbai have sent, as I expected, emails of alarm and concern, but alongside it, they have also sent an outpouring of sympathy and love. This is especially true of people from cities which have experienced terrorist attacks - London, New York, Madrid - they have sent incredibly moving words of empathy. From New York, I had this email:

"Listening to the first reports from Mumbai of today’s horrible news, my first thoughts were of Deepa. How is she? Is she safe? Yet I know, since I am a New Yorker who went through the Sept. 11, 2001 terrorist attacks, that even if Deepa is safe, she is also very saddened and very angry. Sad and angry that such bad things happen to her lovely and beloved city and country. I and my wife understand a bit of how you feel and what you are going through." 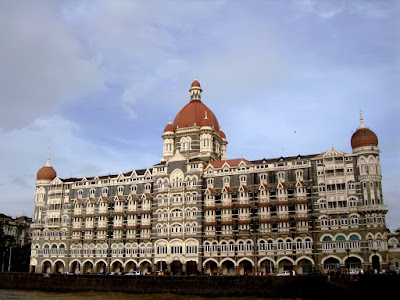 Since the queries continue to pour in, yes, I am well, so are all my guides and other associate staff, and my loved ones. Two friends who were at the Taj last night were rescued and are back home safely. But there is an element of uncertainty as well, because the hostage situation is not yet over. I have no news also of some friends who work at the Trident and the Taj.

As I said in the earlier post, the hostage situation feels like something out of a Hollywood movie, quite unreal and something Mumbai has not seen before. I'm almost expecting Bruce Willis to walk out, announcing that the "bad guys" are dead. But are they "bad guys"? Will they go to hell, as many believe, or to heaven as they themselves believe? That is the real tragedy - that these gunmen believe - truly, truly believe - that they are doing something moral. When I saw the first blurry photos of the gunmen, what I found most difficult to handle was how young some of them looked. What a tragic stupid meaningless waste.

In homes all over Bombay, people are discussing how to solve the "terrorist problem". Tighter security, better intelligence, better emergency responses - all of these are being spoken about, in bitter and angry tones.
.
But really, I wonder, can this battle be fought by stealth or might? My usually practical husband said over dinner last night, "We cannot win except by winning hearts and minds." I fell in love with him all over again, when he said that. Because he is right. As long as communities feel marginalised and victimised, terror will breed in ghettoes around the world. Inclusion and integration is the only way forward. Just to clarify, I am not saying we can hug terrorists and make them change. But we can change the hearts and minds of ordinary people and take away the breeding grounds.
.
The enormity of the task is daunting, but I really believe there is no other choice. It is no use waiting for a 21st century Gandhi to do it! You and I must do it, if we are to change the world. I am definite about one thing - I'm going to sit back and think about how I can do it.
Posted by Deepa at Friday, November 28, 2008 14 comments:

A toast, then, to the Queen of the Bay, through her troubles!

May she shine always, graceful and proud! 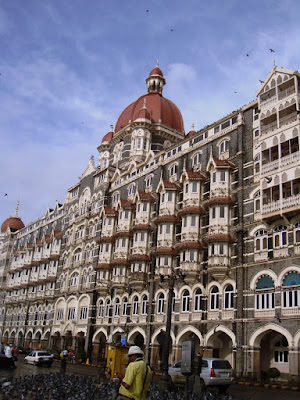 There's really no denying it - the khun is an asbsolutely beautiful brocade. Rich as silk, soft as satin, with the coolness and comfort of cotton - what more could a woman ask for! 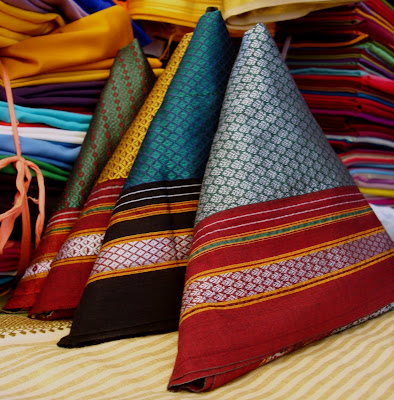 There was a time when you saw Maharashtrian women everywhere wearing these beautiful khun blouses, with traditional cotton sarees. These days, though, it looks like only the older generation is still wearing them.
. 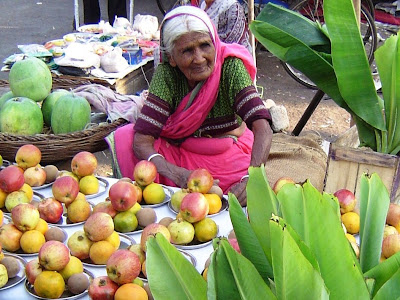 I guess the younger generation has shifted to polyster and nylon sarees, with matching "2x2" blouses. What a pity. The khun is really a gorgeous fabric, that retains colour and lustre even after several washings.

On a recent trip to Dadar, I bought myself a golden-yellow khun. It was folded into a neat triangle for me to take away. The shop keeper took great pride in folding it correctly, and demonstrated the technique for me to learn (so if any of you want lessons in blouse-folding, just ask!) 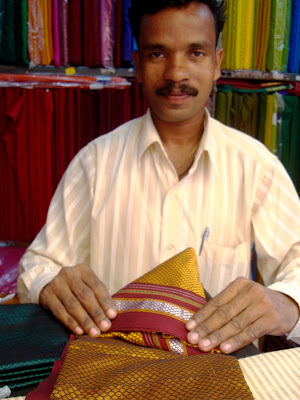 I teamed the blouse with a plain rust-coloured saree, and a necklace of amber and silver. The minute I wore it, I felt good. Maybe it was the golden glow of the khun, or maybe it was the pleasure of rediscovering something traditional - but I felt absolutely on top of the world. 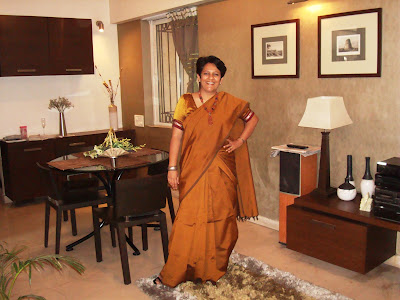 This is of course, not the first time that I have fallen under the spell of traditional fabrics. But it's not just me, you know. That evening, my sis took one look at the blouse and said "Heyyyy, this is nice! I want one too...tell me where you got it!"

The khun had found yet another fan.

P.S: For those who're wondering how 'khun' is pronounced, it rhymes with 'bun'

The National Geographic has listed this blog on their Mumbai Destination Guide! Here's what they have to say about us:
.
"Cull cultural tips and highlights from this family's three-generational approach to Mumbai. The insightful photography and anecdotal writings stem from the three women's local expertise."
. 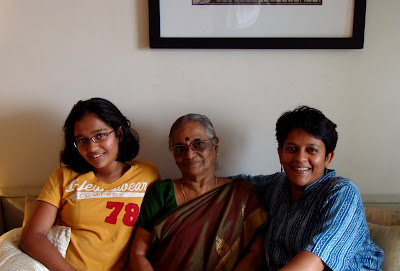 So anyway, I guess this is the right time to post a photo of the three of us! Here's Aishwarya (my daughter) in the yellow T-shirt, Janaki (my mom) in the centre, and that's me in blue on the right.
.
Here's to family! May the clan continue to write!
Posted by Deepa at Thursday, November 13, 2008 9 comments:

Yesterday, I spent a couple of happy hours exploring the shops in Lohar Chawl near Metro Cinema.

My cousin Girish was looking for wall lamps and energy-saving tubelights, and I was looking for focus lights for two paintings. Lohar Chawl is the "Mecca of Light Fixtures" - I've had many people tell me about it, including my interior designer - so I thought it was time I checked it out.
.
After battling a couple of one-way streets, we finally navigated our way into a narrow street with a long string of small shops, each offering a wide range of lighting and electrical options for offices and homes.
. 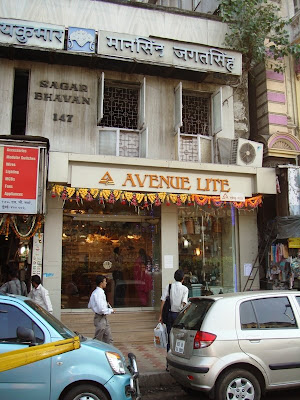 We went to several stores, eventually buying what we needed from several shops. We found that the best way to shop on this street is to go to multiple shops, until you find the specific designs that you like.

"Earlier, all shops sold similar light designs", said the owner of Avenue Lite, one of the bigger shops. "But these days, while we do stock some things in common, there is such a wide variety available in the market that the shops reflect these differences."

We certainly saw a lot of differences! From sleek sophisticated designs to colourful kitschy stuff, the shops have something for everyone. 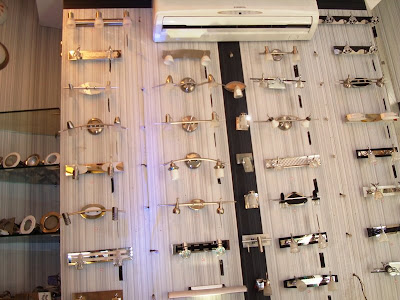 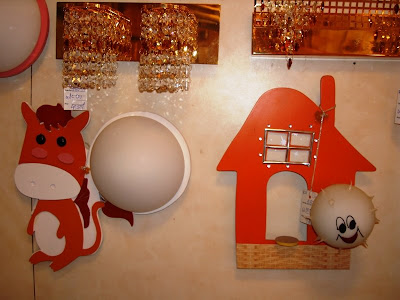 Although retail customers also shop here, Lohar Chawl is primarily a wholesale market. The shopkeepers on this street mostly speak Gujarati. As we walked around I heard them on the phone, negotiating bulk rates, enquiring about prices and availability, and agreeing on delivery dates. The conversations were a happy mixture of small talk and clear commercial negotiations - and I realised yet again why the Gujarati community make such good traders.
.
The shops also offer excellent service. In one shop, I saw an interior designer with his fussy clients, debating little points about decor, while the shop owner patiently assisted them. In another, I found a smartly dressed couple arguing over what would work best for their living room - the salesman attending to them was discreet enough to give them their space, but attentive enough to step in with creative suggestions when needed. In yet another shop, an entire family was there, quizzing a salesman on the merits of a huge chandelier. No matter how difficult the customers were, the salespersons - young men and women in their twenties - were unfailingly helpful and keen to make the sale.
.
Clearly, we were in the very heart of the light fixtures market, and I simply loved being part of this busy, professional, quintessentially Bombay kind of commerce.
.
At the end of two hours, we walked away with bags full of goodies, at prices that were probably among the lowest in the city. As we were waiting for the car, Girish said to me, "Look up, Deepa. See how interesting that building looks".
.. 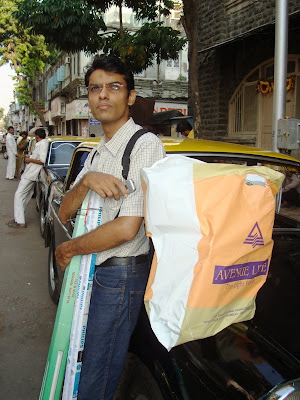 .
He was pointing to the circular building at the corner of Lohar Chawl, which is a sort of landmark in that area. I turned and clicked one last photo, and then we headed home.
. 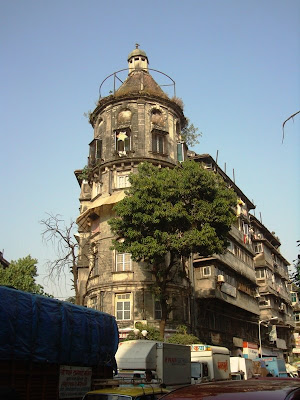