A wedding (and cool biryani!) at Chamda Bazaar

Recently my mother and I attended a wedding reception at Chamda Bazaar (in Dharavi). The bride was the sister of Fahim, one of my mother's colleagues.

A three-storeyed hall had been booked, with the men on the ground floor, women on the middle storey and the dining room on the top floor. The actual nikaah ceremony was over by the time we reached, so Fahim took us upstairs to join the social gathering that follows the ceremony.

The hall buzzed with the conversation of women and the shouts of children running about. We made our way towards the bride. 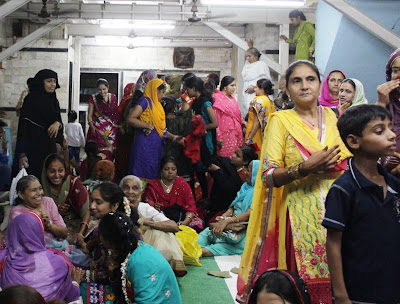 Fahim's family was extremely nice and welcoming. I muttered some inane greetings, grinned foolishly at everyone and then took to lurking behind my mother. 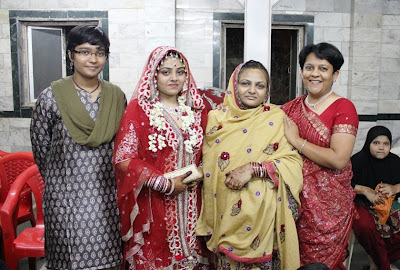 We were soon called to have dinner, which I was really looking forward to. The dining room had about ten tables, each seating around eight people. Each table had a single large platter of mutton biryani, accompanied by a large bowl of raita. Our table was also given a vegetarian biryani. The food was supplied by a professional caterer but it was Fahim's friends who welcomed the guests, filled the platters and made sure that the khaatirdaari was perfect. 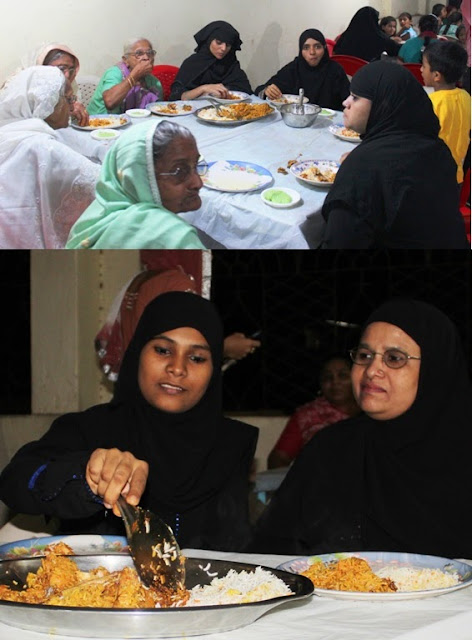 Apart from us, some of Fahim's relatives were also vegetarian as they had lived in Gujarat their whole lives. For dessert there was doodhi ka halwa, which I hadn't tasted before and was very good. My mother took small to moderate helpings of everything (repressed, I call it :P). I, on the other hand, heaped generous quantities onto my plate and felt glad my salwar was tied loosely.

Here's a closer look at the food: 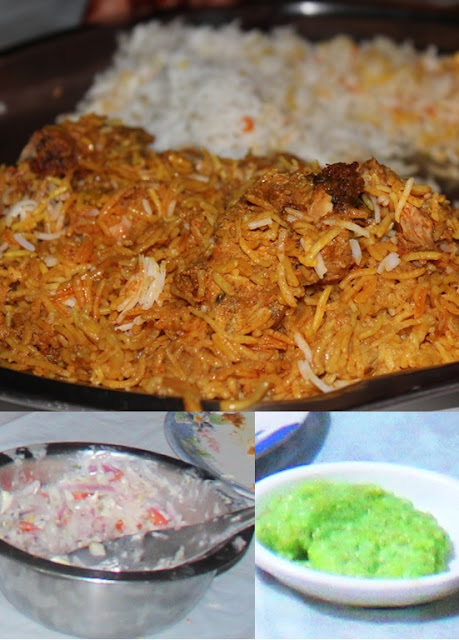 As far as I can remember, this is the first time I've eaten biryani at a wedding. Most weddings I've attended have been South Indian ones with long tables and banana leaves. Sharing dishes at a table was new, and so was being served by Fahim's friends instead of professional caterers. It felt really nice to be taken care of in that way. All in all I'm really glad I got to attend a kind of wedding that I'd never been to before.

The professionalization of wedding catering in Mumbai is relatively recent. It has only happened in the last couple of generations. At my grandmother's wedding, food was served by her uncles. But most of that stopped before I was born, and professionals took over all the arrangements. My grandmother's probably relieved that someone else is doing all that arduous cooking now!
Posted by Aishwarya Pramod at Wednesday, September 18, 2013 4 comments: