"Half the Sky" - University of Washington Foster School of Business


Yesterday I addressed a group of 25 girls from the University of Washington's Foster School of Business. They were here on a Women’s Lead­er­ship and Entre­pre­neur­ship program. It's called "Half the Sky", and it inspires students to make a dif­fer­ence through meet­ings with lead­ers and role mod­els all over India. Most of them are from the MBA program, but there are also a couple of students from other streams. 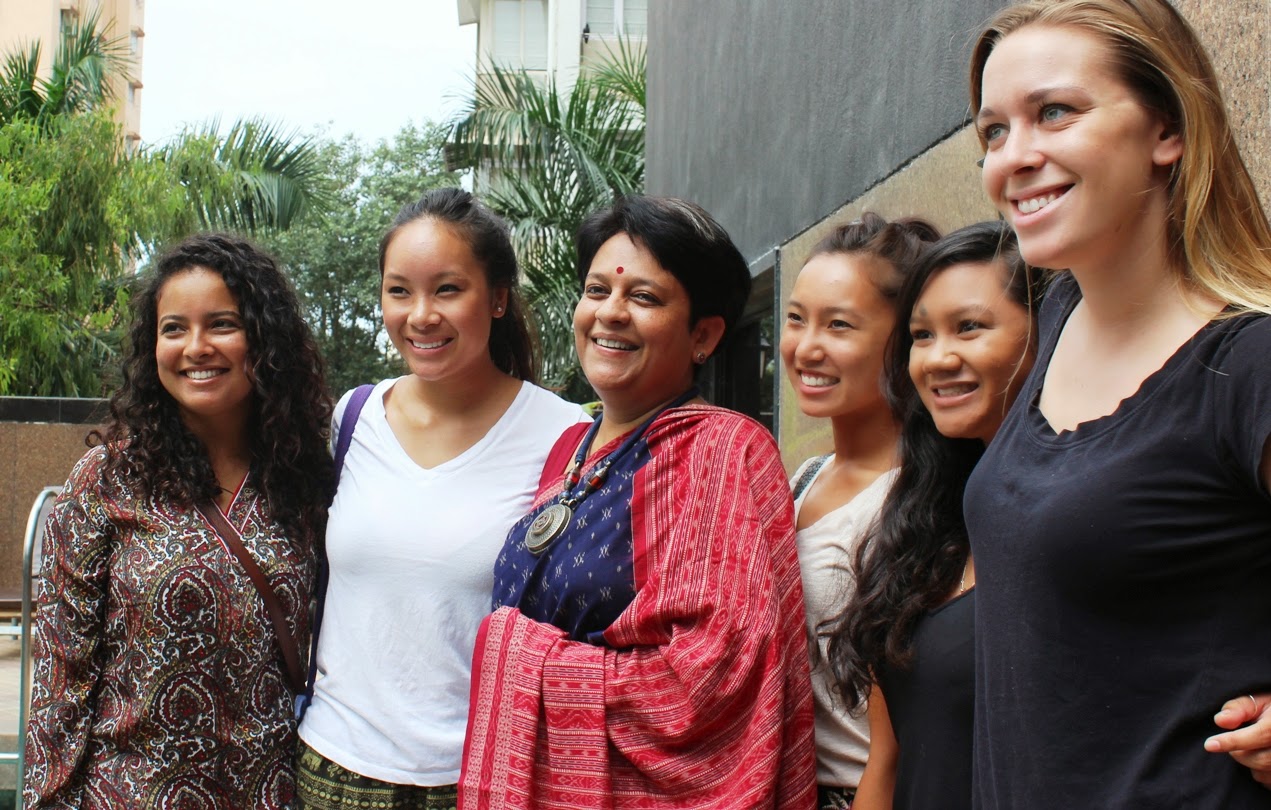 The students are going to be in India for a month, studying women’s leadership, and learning about "social enterprises" that create business solutions to poverty and environmental issues. Apart from meeting lots of women in India, the group is also spending time with non-profits, learning about specific issues first-hand, and working with the non-profits on problem-solving recommendations. 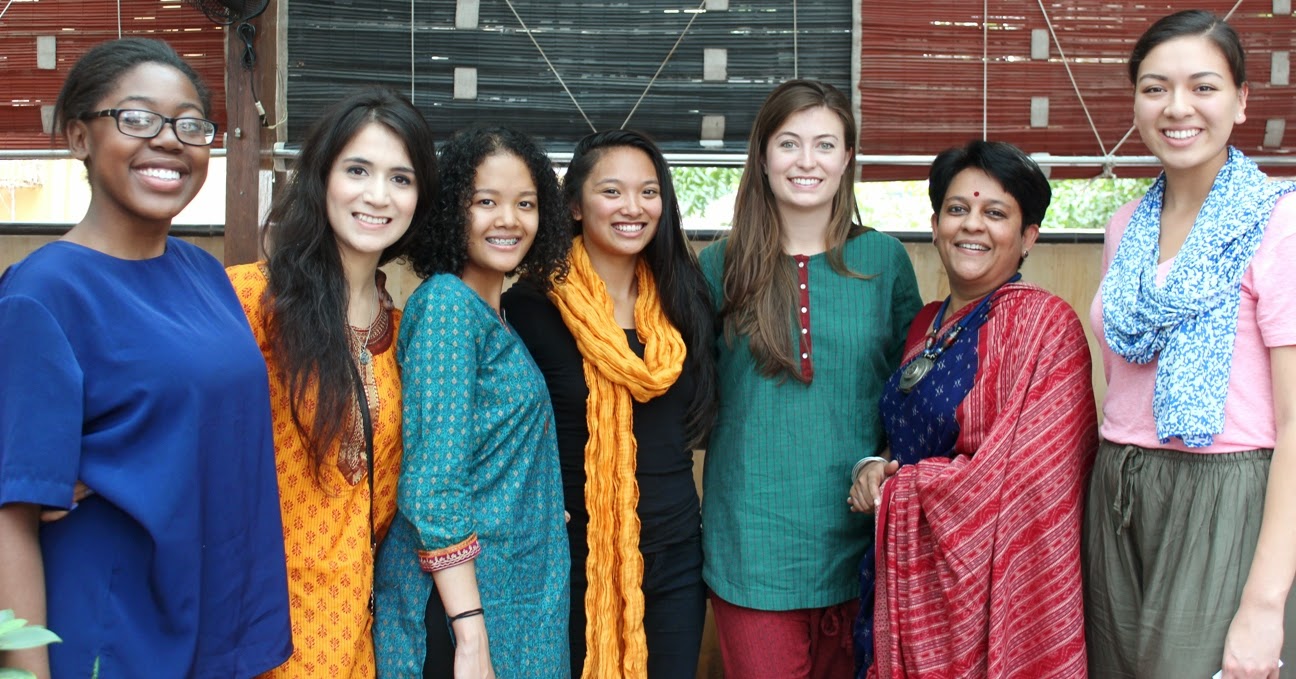 We spent an hour together, and I spoke about my life, my beliefs, decisions that I made along the way, and why I am happy with what I am doing. We discussed the Mumbai Local tour, and how it is designed to be socially relevant and at the same time, financially viable. I spoke also about creating a tour company that was inherently 'responsible', where social good is in the DNA of the company, and CSR is not just an afterthought or a cash handout at the end of the year. It was informal and fun, I enjoyed it enormously, mainly because I connected with the girls, and didn't have to watch my mouth :) 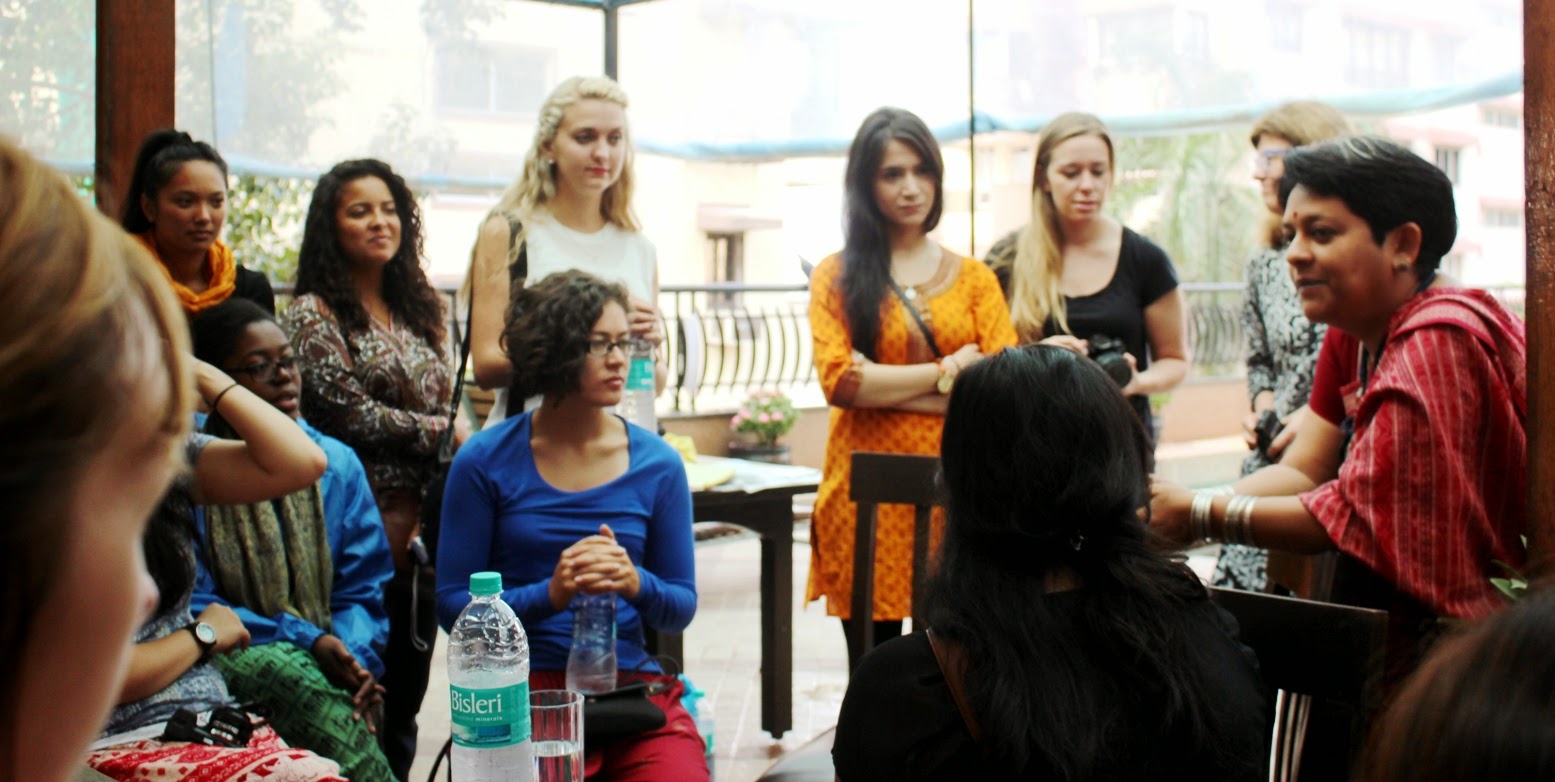 The 'Half the Sky' program is the baby of Cate Goethals, consultant and professor, and wearer of many interesting hats. She has been coming to India since 2010 with this program, and it's always a pleasure meeting her. We posed for photos after the speech. 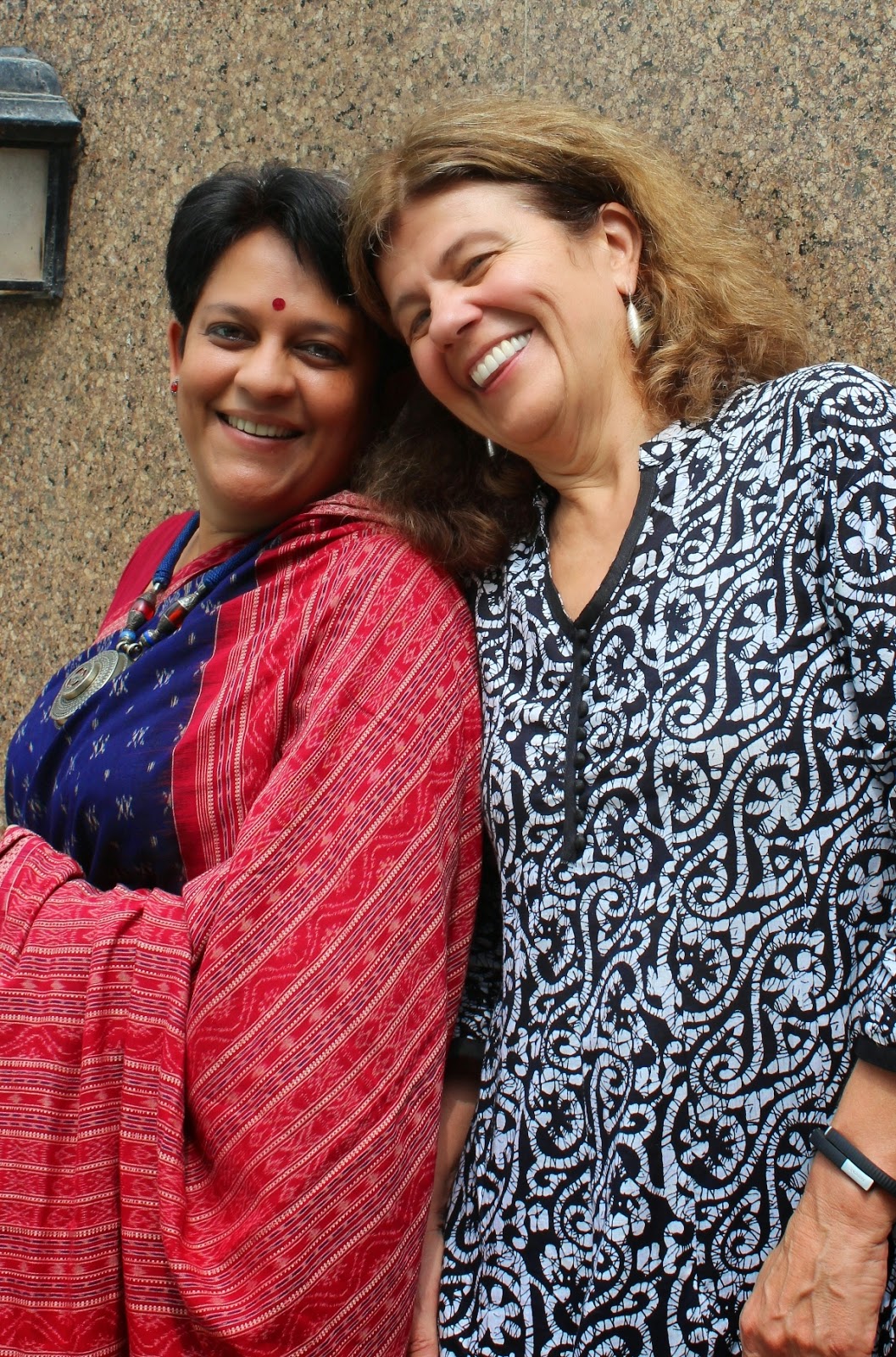 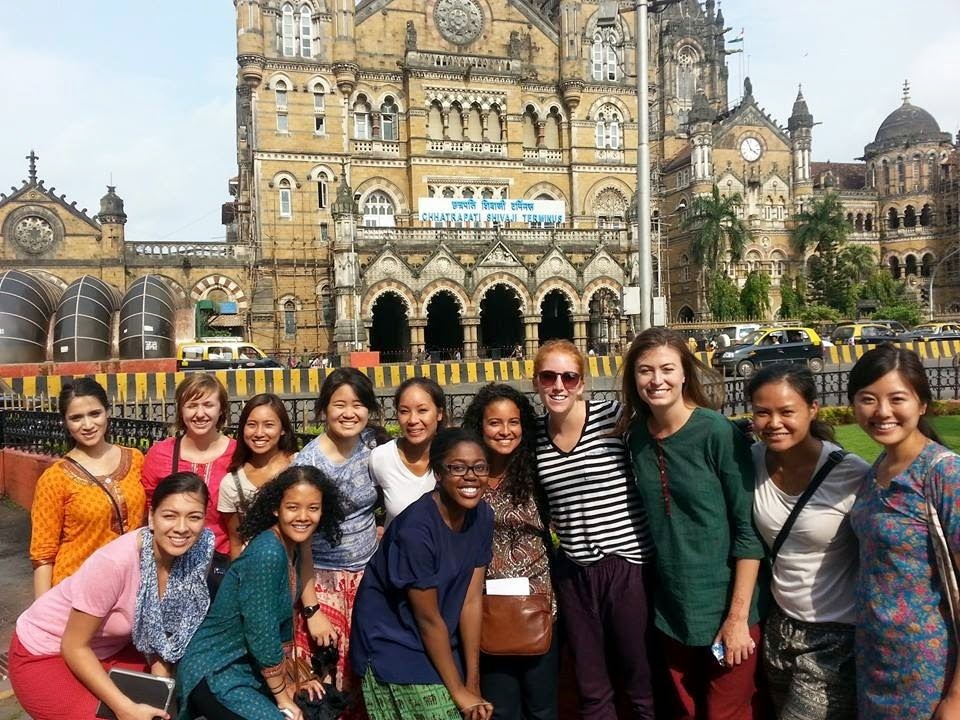 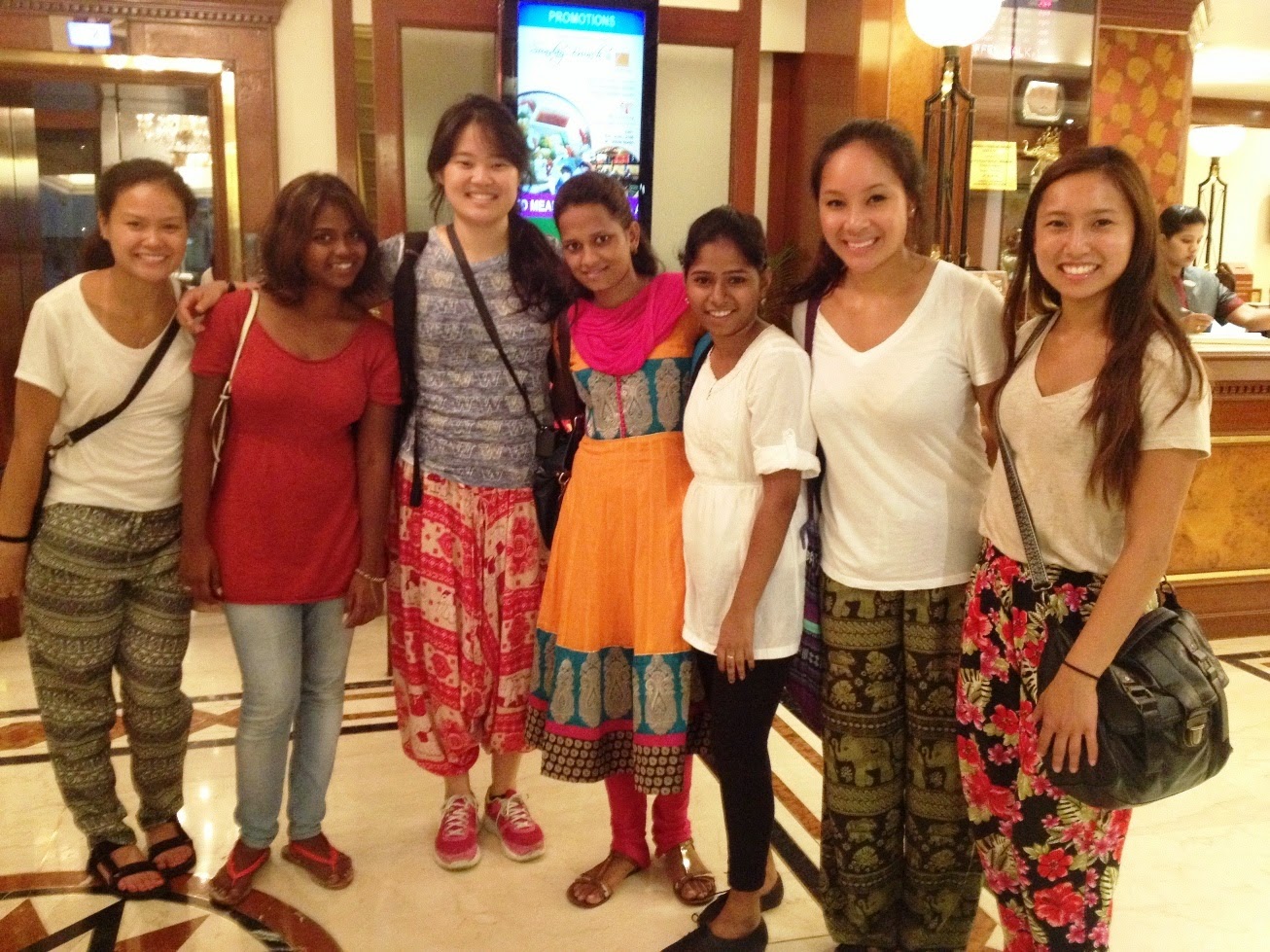 We've been doing this sort of thing for the last couple of years. Here's a collage of images from Cate's visit last year: 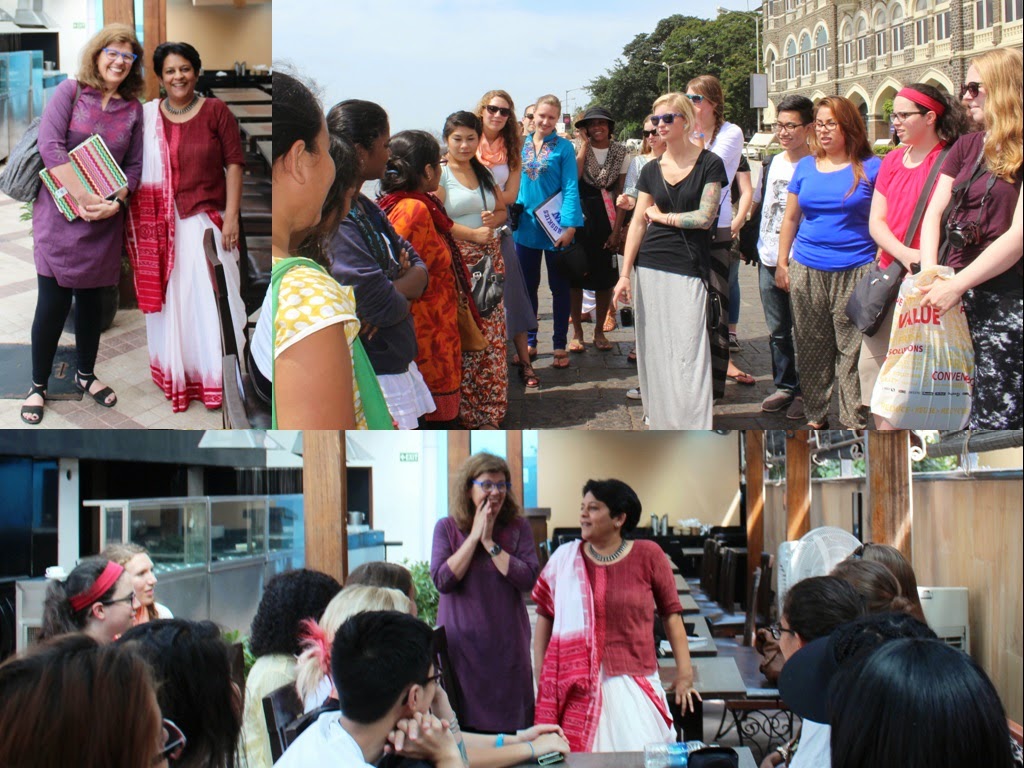 And here's one from their visit the year before that! 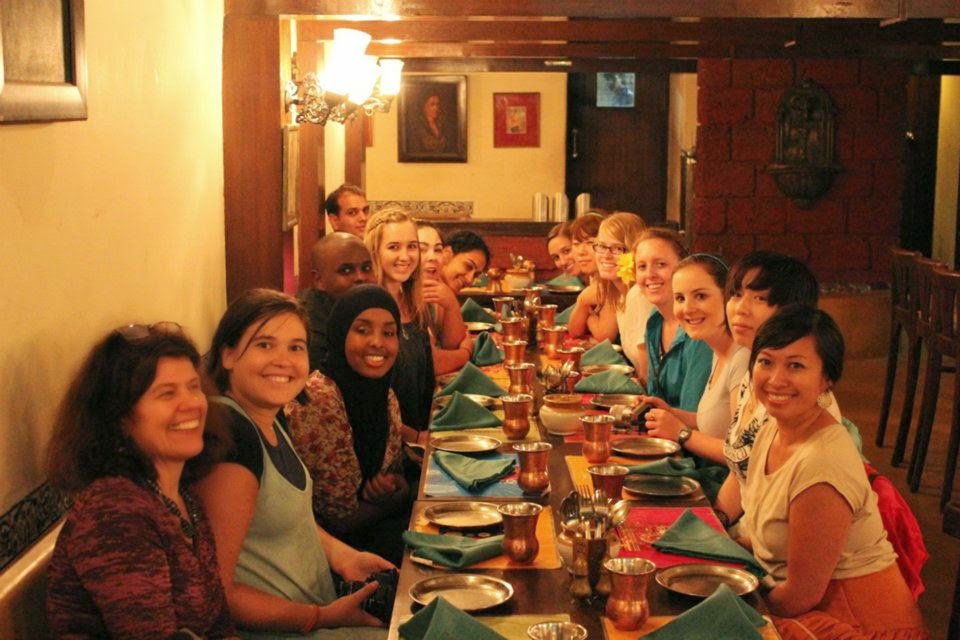 This is a great program, with bright and motivated groups of students visiting India each year. I wish them all the best and hope they go on to become inspiring leaders and role models for the women of the future. Some of the girls this year came up to me and asked if I could be their mentor. Mentorship is a big word - but I think working women everywhere need to share our lives and our stories. Especially, we need to share the difficulties. Speaking the truth, admitting the mistakes you've made, and being confident in stating what you've achieved - this is the most valuable form of mentorship. Too many women - especially in India - tend to be self-deprecating. We need to come out and celebrate our achievements too.
Posted by Deepa at Saturday, August 30, 2014 3 comments:

Anyone who has been to Kala Ghoda knows the decrepit Esplanade Mansions, popularly called Watsons Hotel.

But not many know what the architects originally envisaged, or how the hotel looked in its heyday. Fewer still know the story of how the hotel was built - a story that begins in a small village in the north-west of England.

Here's the building today: you can easily spot the famous cast iron frame structure, still standing strong. But the building itself is in ruins. This is the side-view of the building: 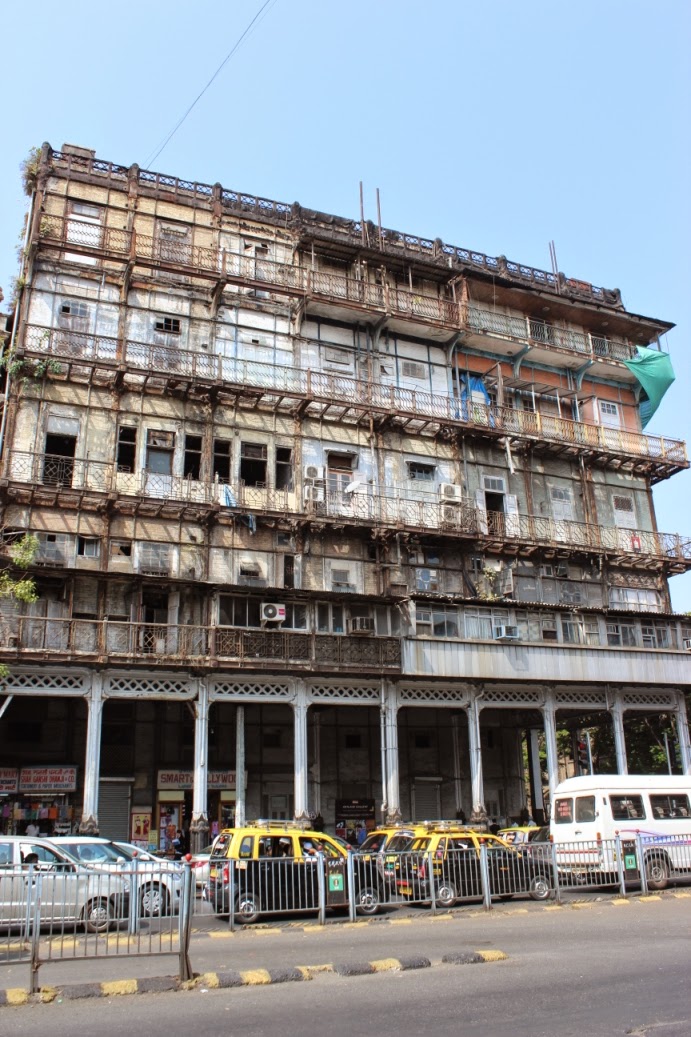 Here is what this building was originally meant to be. See how gorgeous it looks in this painting! (If you click on the picture, you'll get a bigger view).
If you want to see this painting for real, you have to travel to Cumbria, to a little green village called Castle Carrock. The painting of Esplanade Mansions is hanging in their town hall. Here's what the village of Castle Carrock looks like; it has less than 500 people living in it.
The story of Esplanade Mansions actually begins in this little village. Like many good stories, this one also begins with a farmer :) His name was Watson.

The farmer had three sons, but two of them, John and William Watson, left Castle Carrock in the 1840's to start a drapery business in London, dealing in silks and other textiles.

From London, the two brothers migrated to Bombay in 1853. Bombay had developed into a major trading centre by that time; shipping was thriving, land had been reclaimed to expand the city, and links to the Deccan hinterland had been opened to facilitate trade. Perhaps the Watsons thought it made excellent business sense to relocate. I also have another pet theory about this migration to Bombay. Perhaps the Watson brothers attended the Great Exhibition of 1851 in London, at the Crystal Palace? Perhaps they were enchanted with the Indian textiles they saw? Surely the Indian Pavillion was a vision to delight any silk mercer and draper! 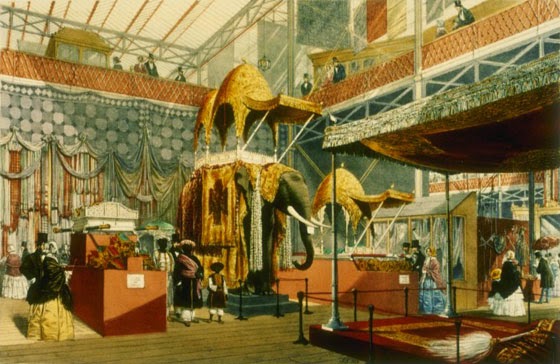 Whatever the reason for migration - the two brothers arrived in Bombay in 1853, and set up shop here. They must have struck gold in Bombay - because they soon had three shops here, at Churchgate Street, Hamam Street and Meadow Street. Apparently it still wasn't enough. Within just ten years of arriving in Bombay, the Watson brothers made a grand bid for yet another building site. The original plans submitted for the building included a shop front on the ground floor, offices on the first and second floors, and residences (for themselves, I presume) on the third floor.

The plans the Watsons submitted conceived of a bold new design - a cast iron frame that was modelled on the Crystal Palace, where the London exhibion was held. Nothing like it had been seen in India before. By 1865, the initial plans for a shop changed; and the Watsons decided to build a grand new hotel instead. But the cast iron girders remained in the plan. Although there were problems with having the designs approved, the Watsons persevered, and pushed through with their plan.

The design involved the import of hundreds of cast iron girders. Arranged from top to bottom, these girders formed a sort of grand metal bird-cage. This sort of design actually exposed bare metal. It was in fact, the first multi-storey habitable building in the world in which all loads, including those of the brick walls, were carried on an iron frame. In that sense, it is the earliest pre-cursor to the modern-day skyscraper.

The crowning glory of the building design was a mansard - a type of roof that actually doubles up as a floor. The architects apparently wanted to cover the top with glass. It would have made a fantastic salon, eh? Or a really fancy penthouse suite for the who's who of Bombay's visitors.

The Watson brothers began to ship materials for the new building into Mumbai. By 1867, many of the materials had arrived; and assembly of the iron framework began on site. By 1869, the hotel was complete - BUT - that beautiful (and impractical) mansard was abandoned along the way. Maybe they ran out of money - or time.

Still, just look at this hotel below! What views of Bombay harbour! This photo is from the 1880s; the only other building at that time in the area was the Sailors' Home in the distance. The wide road you see is the Esplanade; and hence the name of the hotel.
The patch of land on the right of the photo, by the sea, is where the Taj Mahal Palace and Towers eventually came up - but that was not until 1903. Before that, for more than 30 years, Watsons Hotel was the numero uno establishment in the city. Mark Twain stayed here; Kipling wrote about it, and the earliest screening of the Cinematographe in India by the Lumiere Brothers was in this hotel (just one week after it was first screened in Paris). 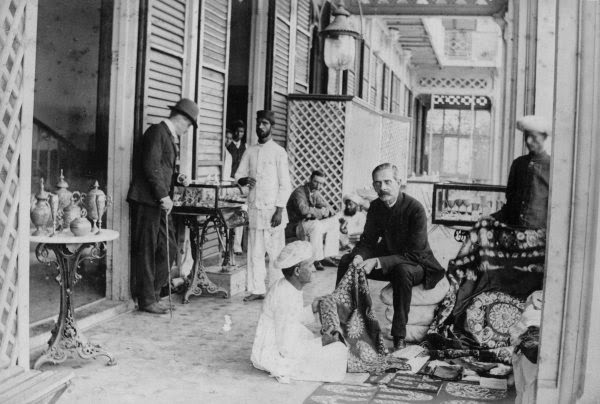 Of the two brothers, John and William Watson, we know this: William quit the drapery business to become a shipping agent. John Watson remained in the drapery and hotel business; but he returned to the village of Castle Carrock in 1869, just after Watsons Hotel was built. His sons, James Proctor and John Jr, inherited and ran the hotel successfully, until they too returned to Cumbria in 1896 (at the time of Bombay's bubonic plague).

With the owners gone, and with competition from new hotels such as Green's, Majestic, and the Taj, the birdcage hotel went into decline. In 2006, the World Monument Fund placed the hotel under the list of World Endangered Monuments.

Here's a recent photo I clicked; can you see the beautiful Minton floor tiling? The iron girders are still standing strong. The inside of the hotel has been divided up and sub-let to lots of small businesses. Next time you're in the area, pop into the building and take a quick look. And if you want a little challenge, then try to spot the Watsons logo on the outside of the building! 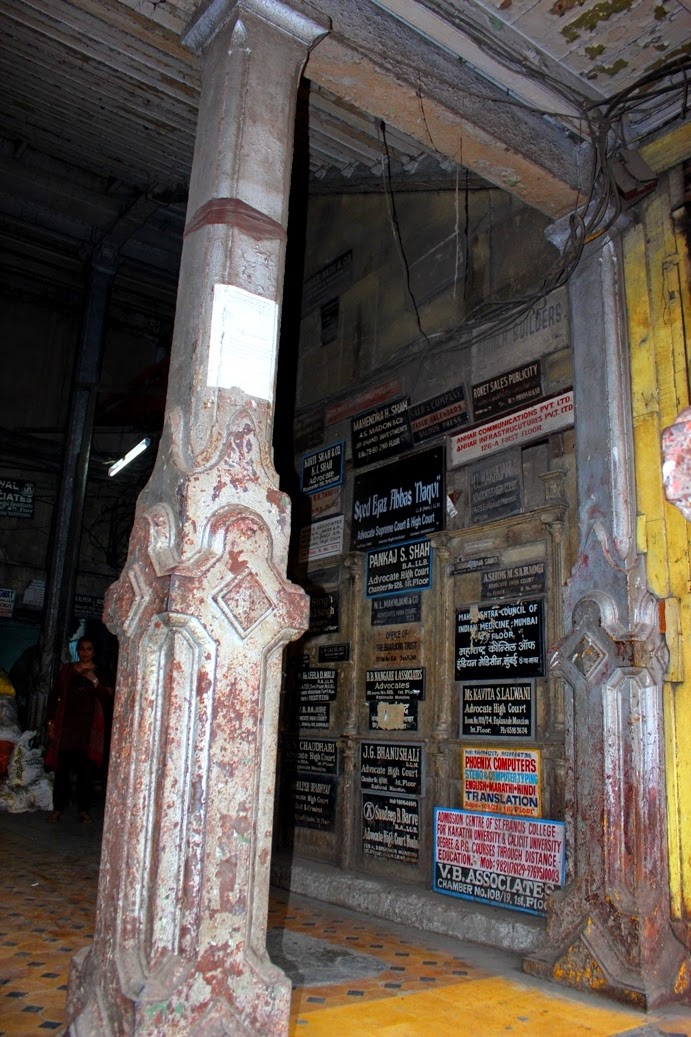