And another goddess is born

Walking through Matunga, I glanced upwards and spotted this colourful carving. I couldn't figure out who this lady was. So I hunted around, and I found a thousand year-old story - the story of Goddess Kannika Parameswari. 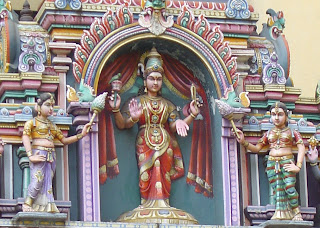 In the 10th Century AD, in Penugonda in the West Godavari district of Andhra Pradesh, a daughter was born to the Vysya chieftain Kusuma Sreshti. She was named Vasavi - and she grew up to be beautiful and talented, an accomplished musician and artiste.

When the girl turned 16, the Hoysala Emperor Vishnu Vardhana visited Penugonda, and became enamoured of her. He was much older, already married, and from a the Kshatriya warrior caste (the girl was from the trader caste). So the alliance was refused. Enraged (and perhaps besotted), Vishnu Vardhana declared war and defeated Kusuma Sreshti.
In the wake of defeat, faced with the plunder and looting of her city, the princess arranged a great immolation pyre on the banks of the Godavari and burnt herself to death. Along with her, 102 other families, who had supported Kusuma Streshti also immolated themselves, in a show of solidarity. The legend is that the princess appeared before them in her true form as an incarnation of the Goddess Parvati, so they followed her into the fires. (Methinks it was political expediency - they had backed the wrong horse, so to speak, and perhaps immolation was preferable to Vishnu Vardhan's tender mercies).

And what of the victorious Vishnu Vardhan? He advanced towards Penugonda to claim his bride - but died mysteriously on the outskirts of the city, vomiting blood. The city was saved from loot and plunder.

And so the princess became Kannika Parameswari, the Virgin Goddess, a saviour of her people. A temple to her was built in Penugonda, and continues to be the most important place of pilgrimage for the Andhra Vysyas.

As for me, I continue to be amazed by the stories and legends that are everywhere around me.
Posted by Deepa at Sunday, July 22, 2007 3 comments:

Email ThisBlogThis!Share to TwitterShare to FacebookShare to Pinterest
Labels: Goddess

Why I love the Pune highway 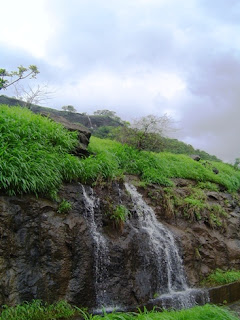 It takes me 2 hours and 20 minutes to drive to Pune.

In the monsoon, I love every minute of it.
I went to Pune last week, to make a little film. We left Mumbai at 2:30 in the afternoon. After the first 30 minutes, we got past Vashi, on to the green belt of the Sahyadri mountains. There was so much lush green colour everywhere that I got drunk on it.
Everywhere on the highway, there were little streams of water gushing, pouring, tumbling. The temptation to stop and get drenched, to drink, to play, was irresistible. 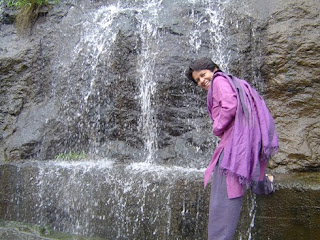 There was a price to pay, of course. For the rest of the trip, I sat in an air-conditioned car in a wet salwar. 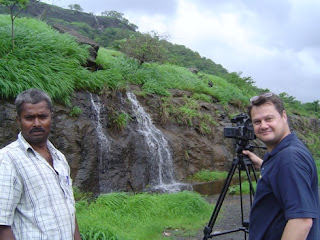 Andy wanted to film it. The waterfall looked great on camera, especially because Andy traced it right from top of the mountain, to where it fell at the bottom. The other guy is Ramana, our camera assistant. He's a Bollywood technician. That means he has endless patience. 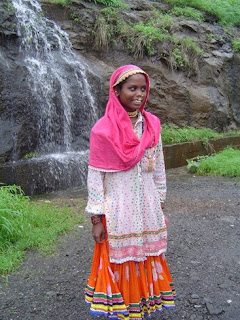 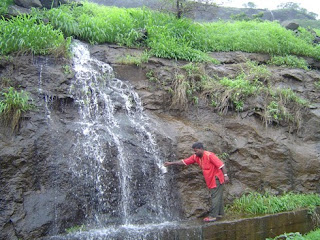 'We stopped for water', she said to me. They collected drinking water in a little steel pot. It struck me then, that I too should have tasted it. What a scared fool I was, to stand under the water, but not make that final gesture. 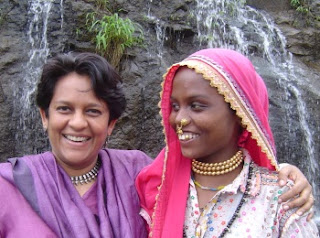 She had two gold teeth (first time I've ever seen golden canine teeth). I asked her, 'Sone ka hai?' - is it really gold? And she grinned and said Yes!

It also struck me that my chunky silver necklace was tribal too...but my wearing it is an urban posturing, whereas her gold necklace was the real McCoy.

I asked her where she was from. A couple of seconds after I asked, I realised it was a silly question to ask a nomadic people. She answered in almost a philosophical way - Hum log idhar Bombay-Poona mein hi rehtey hain. We're people who live right here in Bombay-Poona.

By using two places in her answer, she staked her claim on the highway.
Posted by Deepa at Sunday, July 15, 2007 4 comments:

Photos in the Inbox 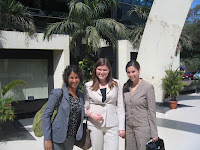 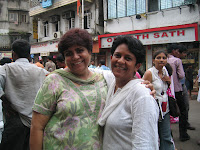 This morning, I got these two lovely photos by email - they were from a Mumbai Magic bazaar walk last month.
Jennifer, Noa and Courtney - the three Americans in the first photo - were in Mumbai on work, and they came with me on an exploration of Bhuleshwar Bazaar. Jenn mailed me the pics.
In the second photo, that's me in white, and that's my friend Farida in green. Farida is one of the 'Magic ladies' who works with me as a guide. The five of us went walking in Bhuleshwar and Kalbadevi.

It was fun to go on the walk with three interested (and interesting!) young women. We dawdled in some places, walked faster in others, but there was a sense of exploration, of enjoyment. We stopped to examine small shops selling strange things, to photograph and to laugh. Okay, okay, I confess, we giggled a bit as well - but hey - what else do you do when you discover shocking pink bras and electric blue undies in conservative Bhuleshwar?

There are more photos of the walk at Noa's Yo! India blog. Here's her post on beads, jewellery and Indian innerwear. And here's Mirchi Galli, where we discovered mukhwas and masalas.

My favourite piece on Noa's blog, though, is this one - a video of a Mumbai car ride.
Posted by Deepa at Wednesday, July 11, 2007 4 comments:

Tai Chi and Cats - An Evening at Marine Drive

I was filming for an offbeat travel show on Mumbai, and we wanted some footage of Marine Drive.

A mutual friend introduced me to Rohini, whose family owns one of the buildings along the drive. And Rohini very kindly said, 'Of course you're welcome to use my terrace!' 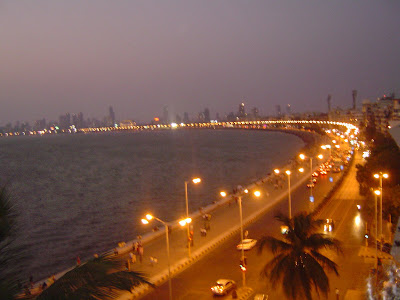 What's a Mumbai blog without at least one photo of this view?

So we landed up, camera crew and I, and we were greeted by all of Rohini's 20 cats (OK, I may be exaggerating a bit). As the crew went to work, Rohini came up to the terrace, to see if we were doing ok.

We got chatting, and I discovered that Rohini does all sorts of mystic stuff, she works with crystals, does tarot reading, is a mandala therapist...I don't even know enough to list everything she does! But I was fascinated (Hey - all I knew about 'mystic' women was from Whoopi Goldberg in Ghost. I'd never met a honest-to-goodness real-life person before!).

Anyway, she was lovely, relaxed, unassuming and charming. A couple of her friends dropped in as well, so the four of us hung around on the terrace, watching the sun go down over the Arabian Sea.

I had just started learning yoga, and the three of them were practising Tai-Chi, so we traded notes and tried some funny poses.

I totally enjoyed it!

First of all, there was the whole setting. Sunset, breeze in my hair, birds flying, lots of talking and laughing, with a bunch of intriguing women...And then, there was the incongruity of it all. Have you ever tried waving your arms and legs in strange moves on an open terrace in front of complete strangers? It's liberating, to say the least!
Posted by Deepa at Thursday, July 05, 2007 6 comments: