Making chaklis on a rainy afternoon

It's pouring outside, and the plants in my balcony are loving it. The little fern, long dormant, has burst into new fronds, as if to make up for lost time. The money-plant has put out long tendrils and I'm having to twirl it around the holder to keep it from rioting. And my karpooravalli (a kind of Indian oregano) has overgrown its pot; its dark green leaves have grown gleefully giant-sized. 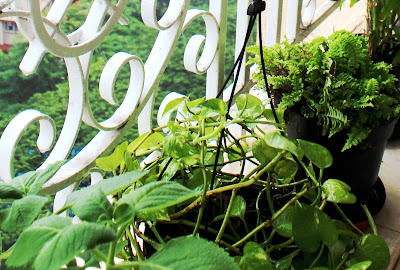 This kind of rainy weather makes me want to curl up with an old Asimov book and masala chai. But it also makes me long for something chat-pata in the afternoons, to go with the tea.

Yesterday I got it into my head that what I *really* wanted was chakli. Prickly, snacky, crunchy, chakli.

The good thing about being an adult and in charge of your own kitchen (complete with maids) is that every little wish can be translated very quickly into reality. So here we are today, sitting pretty on a fresh batch of chakli. And I've already had 2 cups of tea, just to go with it :) 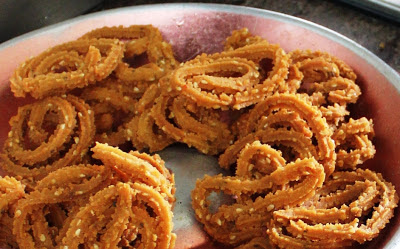 There are lots of recipes for chakli. You can pretty much make it with any flour you like - rice, wheat, ragi (millet), mung dal, buckwheat, sago, and so on. The typical Maharashtrian chakli is made with a mix of rice, chana dal, urad dal, and rice flakes (poha). These are washed, dry-roasted and ground with spices. The generic term for this kind of roasted flour is bhajani. (from the Marathi verb bhajaney, which means to roast). Chakli bhajani is widely available in grocery stores (and, I am told, also in Indian stores abroad). In Mumbai there are also small specialty shops like this awesome one on Ranade Road: 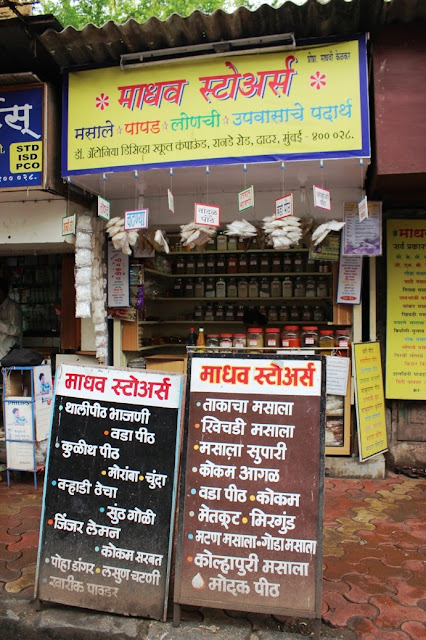 So really, the easiest way to make super-tasty chakli is to buy the bhajani from the market. We didn't have any, so we just made plain rice flour chakli, flavoured with white sesame (safed til) and carom (ajwain/omam).

The traditional Maharashtrian approach is to steam the bhajani. Me, I just skipped all that and cut to the chase :) 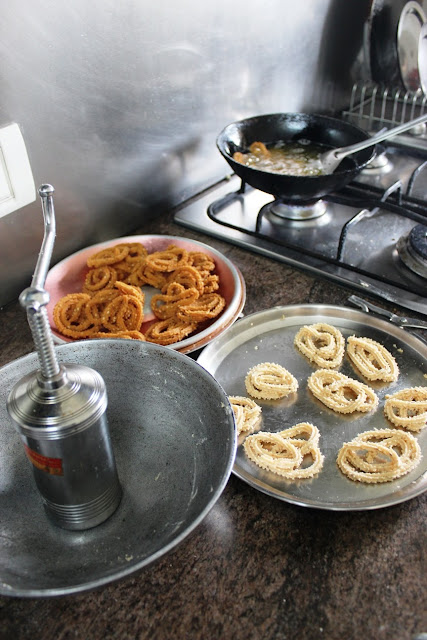 We used rice flour, sesame, carom, salt and a little chilli powder. We used a little hot oil to bind the dough (ghee or butter would have been nicer, I think). We kneaded the chakli with warm water, not cold. And then of course, the dough went into our chakli-press contraption. I'm not posting a recipe because really, there are hundreds of recipes online. Just do some googling and you'll find lots of options. The good news is that no matter what you do, it will likely turn out ok, as long as you get the salt correct.

This is one of my favourite photos from Lalbaug: it's a local tea shop where we stopped for chai.

In case you can't read Marathi, here's what the signboard says. "A request: If you don't have the exact change, then check with us *before* you order tea". On the last line of the sign, for regular customers the shop offers a "bank" where change is held in trust - until the next cup.

Attitude + customer service, all in one signboard. Wah re Mumbai!
Posted by Deepa at Saturday, June 15, 2013 4 comments: