A Sunny Morning at Sewri Fort

- By Deepa Krishnan
I have been going often to Sewri these days, now that flamingo season is here.
But today, I also took the opportunity to climb up to Sewri Fort with my friend Sancia. I had forgotten my camera, so these photos are from my cell phone. 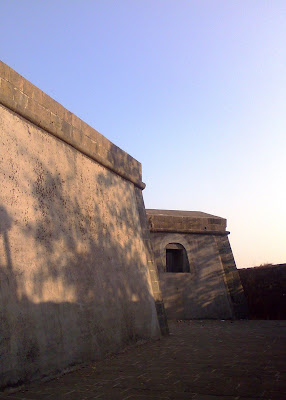 It was 8:30 a.m., and the sun was just starting to warm up the fort walls.
The fort interested me, because it is very much part of the city's history. It belongs to the heady "pirate" days on the Bombay coast, when wars were fought for control of Mumbai as a trading post. 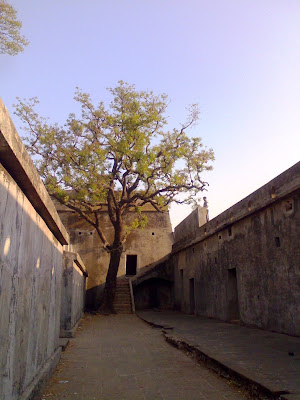 Sewri Fort was built by the English, to protect their interests in Bombay. A carved stone over a doorway says 1736; but battles were fought here even before that. 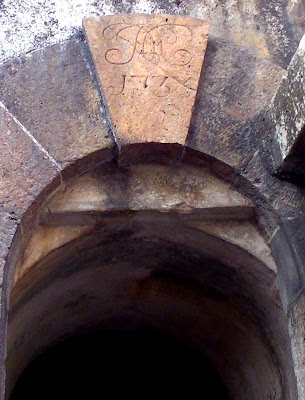 The Siddis attacked and conquered Sewri in 1689. The also overran Mazgaon, and raided Worli. Check out the much tougher looking Siddi fort here; my daughter wrote about it when we visited. Safe in their invincible fortress, the Siddis, known for their naval prowess, were a force to reckon with.
Spurred by defeat at the hands of the Siddis, and threatened by the Marathas and other European powers, the East India Company went into a building flurry in the second half of the 1600's, raising fortifications all over Bombay.
Sewri Fort was one of them. It wasn't a useless investment. When the Portuguese attacked in 1772, the attack was repelled from Sewri Fort.
Here is a pictorial timeline of Mumbai's forts
(those that are still standing today): 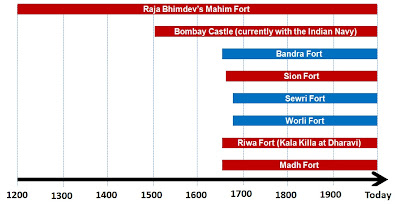 As you can see, lots of forts were built in the second half of the 1600's. Most had fallen into disrepair in the last 300 years. In the last 5 years or so, the government has begun to "restore" these forts. The ones that I have coloured in blue have been "restored", but it is so insensitively done that it makes me wince.
In the photo below, you can see the original stone steps going up to a look out point. Concrete has been poured over the curved decoration of the steps, to create a cement "banister" for these steps. A concrete wall partly covers the original stone arched door (where I found the carving of the year). What were they thinking?? 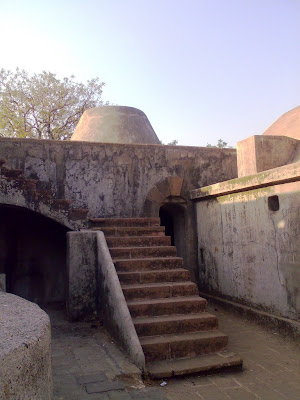 50 sepoys manned this fort; and it had 8-10 cannons, looking out toward the sea. There were living quarters, and ammunition stores. Today, all the bunkers are concrete, although some attempt has been made to keep the shape in line with the original construction. 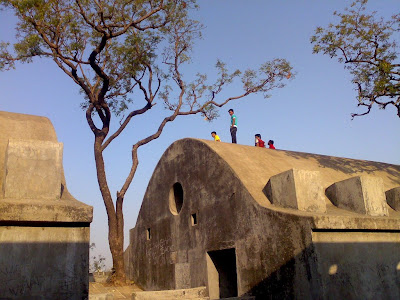 We climbed up to one of the view points to look at the harbour. The tide was retreating; beneath us we could see mangroves; and amidst the retreating water, there were flamingoes feeding. 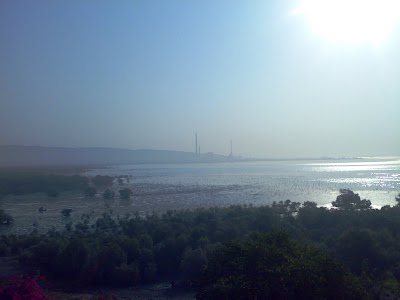 We went down and got some close up sightings of the birds. Today the sighting was really fantastic; we spotted what must have been at least two or three thousand flamingoes. The juveniles stood in little brown and white groups, and the adults stood in much larger groups of pink. Apart from that, I saw gulls, stints, kingfishers, egrets, herons and what not. But without my camera, I couldn't get any decent photos :( sorry!!
Eventually I got hungry; and Sancia also needed to go to church. So she dropped me at my mom's house, where an excellent breakfast was waiting. Dosa, chutney, sambar and molagapodi. And filter coffee to top it all. Bliss! I wish all Sundays were like this :)
Posted by Deepa at Sunday, February 27, 2011 12 comments:

Flat tyre on the Vashi highway

By Deepa Krishnan
We were returning from a wedding in Pune, when the car began to veer and drag a bit to the left. The front tyre had gone bust. We asked a truck driver where we could get it fixed, and he pointed to a repair shop about 500 metres away. 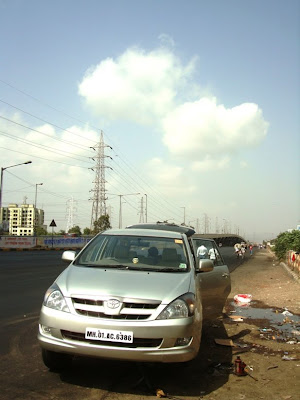 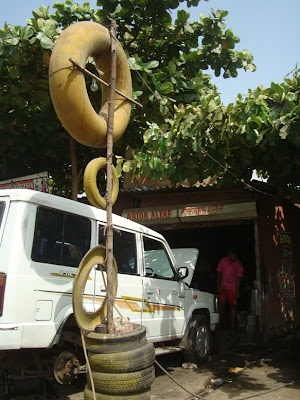 The 'Puncher' Shop with its rubber tyre advertising
I was surprised at how long it had been since I had last visited a puncture shop. Ten years, I think! You know, this is what happens when you employ drivers, and stop taking the car out yourself. You kinda stop doing these little things, and before you know it, boom! you're sitting in a little ivory tower, and you don't know what's happening out there any more.
I discovered, for example, that there were now these new-fangled things called tubeless tyres. Don't laugh, dammit. I didn't know!! When I last looked, tyres were filled with thin rubber tubes, the tubes were full of air, and that's how cars worked. Now apparently, these tubes have disappeared. No longer can you turn a tyre inside out and wrest a skinny tube from its innards. No longer can you fill these tubes again with air; and send the car merrily along it's way.
Instead, you fix a flat tyre with an entirely different set of tools.
The first thing you need, is a strip of this deceptively simple looking stuff. 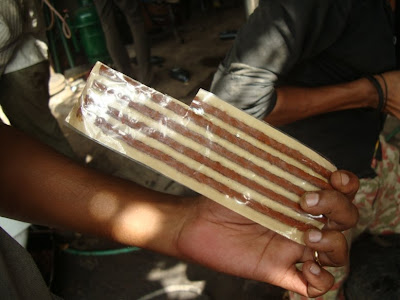 This is a tough, chewy rubbery-leathery thing that sticks to your fingers if you let it. It's basically a plug. 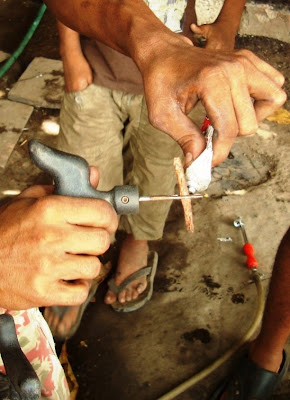 The next thing you need is this T-shaped tool, with a needle. And you need a tube of vulcanising fluid.
Now for the repair itself. Snip a small strip of the rubber plug, shove the needle through it; and then put this vulcanising fluid on it. Then you grab the handle with both hands, take a deep breath, and shove the strip it into the problem spot. See the guy in the photo below? 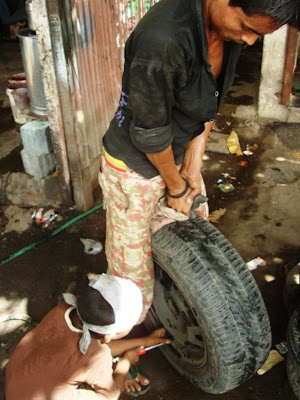 Our repair guy was around 16 years old.
There was an assistant as well, a little kid with a bandana.
So what happens - chemically speaking - is that the vulcanising fluid works on the strip, and converts it into a permanent hardened plug. (Or at least, that's what I think!). The little kid's job was to keep the air-pressure in the tube constant, so the plug would set well. 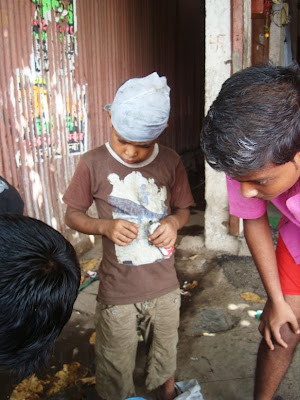 The Apprentice.
He took his job seriously.
There were other neighbourhood kids as well, watching. 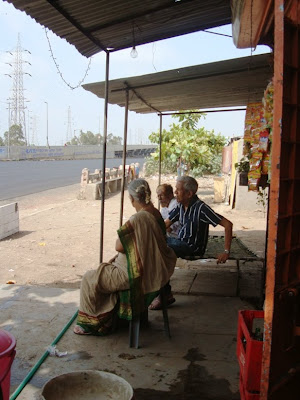 Mom and Dad waited outside.
The neighbouring shop-owner kindly gave them space to sit. 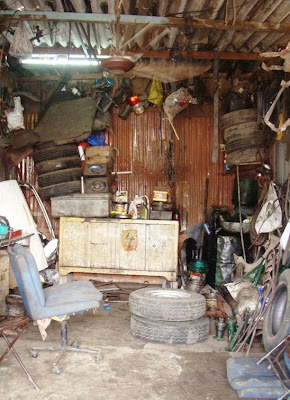 Inside of our repair shop. I have *no* idea what most of these things are.
What I do know, though, is that these things are there for a reason. *Some* car, *some* day, will be rescued by some weird contraption that can only be found in this mess!
Seriously, why do cars have to be so complicated? :) 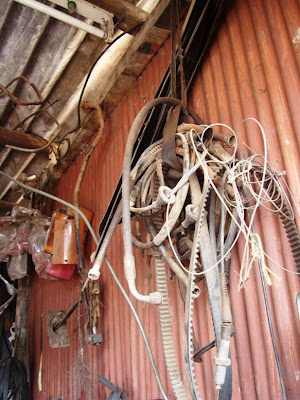 For example, what on EARTH are these belt-thingys? 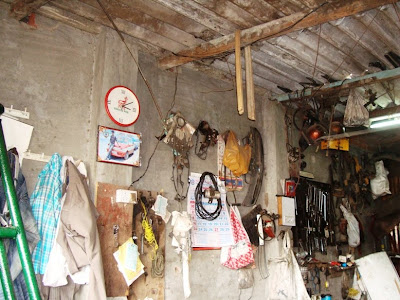 More mysterious gizmos.
What is that U-shaped thing hanging from the ceiling? Or is it not U-shaped? Should I announce a prize for anyone who can actually name all these things?!!
Anyway - the whole repair thingy took about 15-20 minutes. I tried chatting to the 16-year old; but he was cagey. I'm from Calcutta, was all he would say. I let him be; there are a lot of illegal migrants from Bangladesh near the Vashi area, and I did not want to probe further. He was making a living in a tough world...I wished him well, and went on my way.
Posted by Deepa at Thursday, February 10, 2011 5 comments: