Of beads and happiness !

- By Deepa Krishnan
One of the nicest things about living in India is how you can get something custom-made so easily. Today I set out to repair a broken green necklace, and to create a new piece of red coral jewellery for myself.
This green necklace is one of my old favourites...but has been sitting inside my jewellery box for a while now because it broke while we were on a TV shoot. 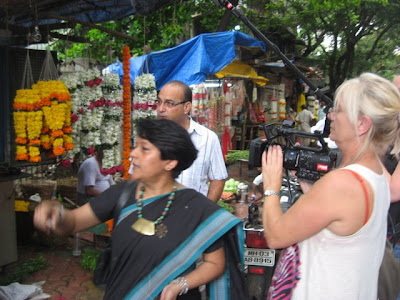 Mercifully, I didn't lose too many of the beads. So I put all the broken bits away in a little box, waiting for the day when I would have some spare time.
Today, I finally found the time, and took the box to my local street-side jeweller, Mr. Raju Patwa. 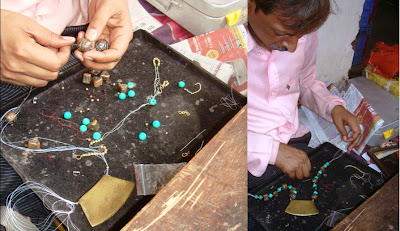 The Patwas are a traditional group of craftsmen who work with beads. Although this man had not seen the original necklace - all I gave him were loose beads - he took one look at it and created something just as attractive as my old one. I sat on a little stool next to him, and watched him deftly put it together. At the end of 15 minutes, I had my necklace back, and a big smile on my face! The cost? Thirty rupees. I was very pleased because I used to wear this necklace very often, and I missed not having it.
My next project was more ambitious. I have this really lovely coral pendant set in silver. It used to be strung on a single red leather thong, but the thong broke. So I was stuck with the pendant, not knowing what to do with it. 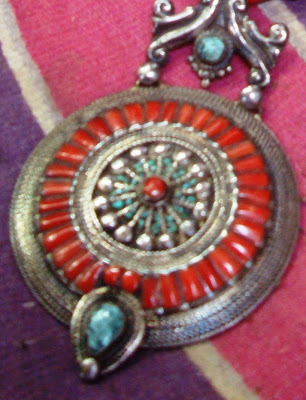 This time, I wanted to string it on something slightly chunky looking. So Mr. Patwa and I spent 15 minutes looking at different beads and arranging / setting them in different combinations. After examining red, green, and silver beads, and tsking and tut-tutting our way through many wrong combinations :) we finally hit upon the idea of using tiny black beads, interspersed with asymmetric long coral beads.
Once we had agreed upon the basic idea, I left Mr. Patwa to think up the actual creative bit of how to make the idea come alive. I was to come back after an hour, to see what he had done, and then we'd figure out any further changes.
With an hour to kill, I wandered through the market with my mom and sis. We went to a specialty food store, stocked up on some favourite treats, bought fruits and vegetables, ate rawa dosa and had mosambi juice...and by the time I came back, there was a half-finished necklace waiting to be tried. 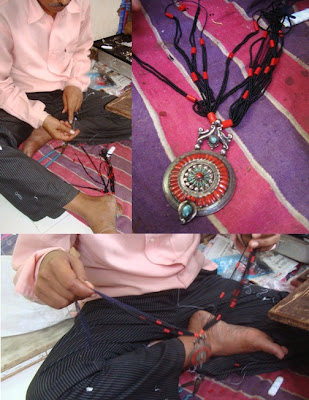 So then we went to the final stage: I tried it, we added some beads, removed some others, modified the length so it would be just right for me...and finally, I took it home. It had taken totally 1.5 hrs to get this necklace done. I paid Rs 300 for the coral, black beads, design and labour and thought it was well worth it to have something so personalised.
And then...(sigh)...the pleasure of wearing it (and knowing no one else has one just like it!). 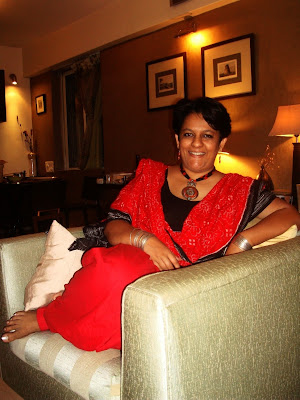 My sis saw the necklace and said, I want to design one too! She has just today bought a silver pendant and ear-rings from SIA (where there is a massive sale going on), and we're going to make an expedition to Bhuleshwar to buy beads. Then we'll come back to Mr. Patwa to figure something out for her. I'm looking forward to the next creative session!
Posted by Deepa at Saturday, June 25, 2011 16 comments:

Email ThisBlogThis!Share to TwitterShare to FacebookShare to Pinterest
Labels: Women

- By Deepa Krishnan
Wow. It's not often you get to see a live performance that is this fantastic. To think I almost didn't go!
This is Dastangoi, the art of story-telling, that used to be popular among the Mughals. I went for a show a couple of weeks ago, at M C Ghia Hall in Kala Ghoda. 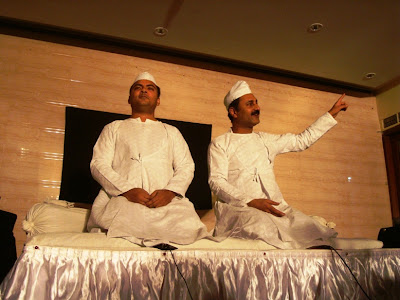 The Mughal Emperor Akbar loved Dastangoi performances, and encouraged them in his court. The art died later; so this is a revival of a lost form. But the show that I saw was different in some aspects.
For one thing, the original Dastans (tales) were usually told by a single guy. The Dastan I heard had two narrators; Danish and Mahmood. They took turns to tell the story to the audience; skillfully passing the baton back and forth. They also conversed with each other as part of the story, often enacting conversations between two different characters. Their timing was perfect. They were witty and the script was incredibly funny, so all through the performance, we were rolling with laughter. If you ask me, it was much better than having a single narrator. Here's a photo of Danish and Mahmood with mock-serious faces, saying the most satirical things. The audience was literally in splits. We were forbidden by the duo from clapping in appreciation, so all we could do was say wah-wah, wah-wah in traditional style, and collapse laughing. 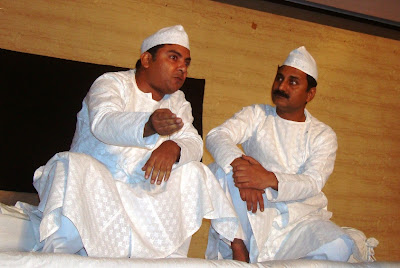 The original Dastans were about djinns and magic and adventure and what not. Here's a scene from the most popular Dastan, the Epic of Amir Hamza. Amir Hamza is a larger-than-life hero who travels to strange places, fights demons, trades witty remarks and generally saves the day. No wonder Akbar loved him! I can imagine the entire Mughal court going ha-ha-ha, wah-wah, wah-wah, just as we did! Under Akbar's patronage, Dastangoi evolved into a popular form. This illustration was commissioned by Akbar, as part of the Hamzanama, a huge series of 1400 such drawings, illustrating all the adventures of Hamza. Look carefully and you will see a giant called Arghan Deo rising from the water bearing a gift for Hamza. I wonder what this particular fairytale was! 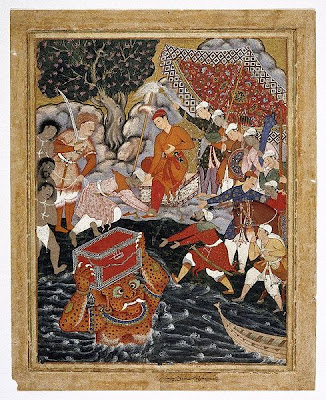 The tale that Danish and Mahmood told us was not of Amir Hamza. It had a very modern theme - it was about civil rights and sedition, inspired by the imprisonment of Dr. Binayak Sen, a health care worker and human rights activist. For those who don't know this story, it would be good to look up the Free Binayak Sen website. Dr. Sen and his wife Ilina Sen were among the audience (I was sitting at their feet; hence the unusual angle!) 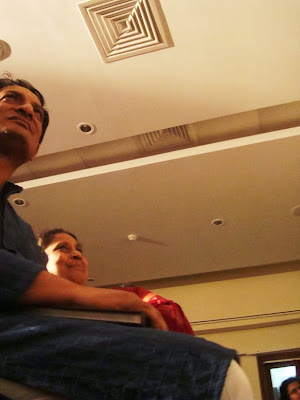 Because the Dastangoi format requires a magical setting in a strange land, Danish and Mahmood invented a strange country, peopled by strange characters. But it was easy to recognize comparisons - there were the poor landless, there was an oppressive state and police, and a shoddy legal system. The story was told in satire form; the humour saved it from being a one hour moral sermon. It was powerful and appealing, and the audience responded with many wah-wahs both for the content as well as the presentation!
Earlier in the evening, both Dr. Sen and Illina addressed the audience on the issue of sedition laws and how they can be misused by the state. Dr. Sen is Vice President of PUCL (The Peoples Union for Civil Liberties), a 25-year old organisation formed primarily as a platform for the protection of civil liberties and human rights. 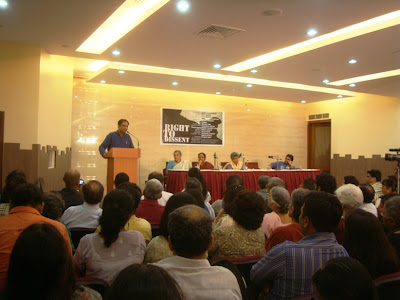 The audience for the speech represented Mumbai's educated elite (no surprises there) - social workers, writers, activists, lawyers, film makers and college students. People listened carefully when the Sens spoke, and clearly there was a sense of real concern among the audience about the issues that were discussed. 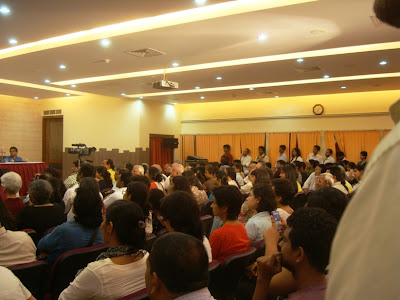 I went with my friend Pooja. Before the speeches, we made a little foray into Jehangir Art Gallery, where I bought a couple of paintings. This is me with the artist, Somnath Roy, who teaches at the Government College of Art and Craft, Calcutta. The paintings are now hanging on my wall at home. 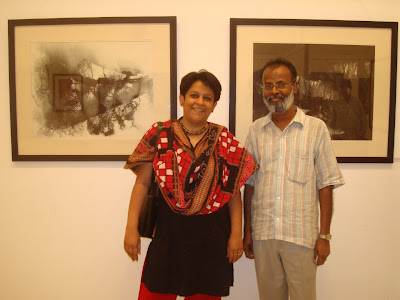 Later that night, Pooja and I went to dinner at Chetana, where we had a Rajasthani and Gujarati thali and discussed the performance (we both loved it). I dropped her at Churchgate Station for her train, and returned home happy. All in all, a good evening, even if I did return significantly lighter in the pocket!
Posted by Deepa at Friday, June 17, 2011 8 comments: