I enjoy walking through Bandra, because I am always surprised by something new. I don't mean new cafes or shops. It's all the new street art that's everywhere (ever since the St+ART Festival that happened in November last year). It changes my experience of Bandra each time I go there.

Take this wall in Ranwar Village, for example. I don't remember seeing anything when I went there some months ago. Then all of a sudden, on a walk last week, I turned a corner, and there it was. A woman in black and white, adding drama to the wall. 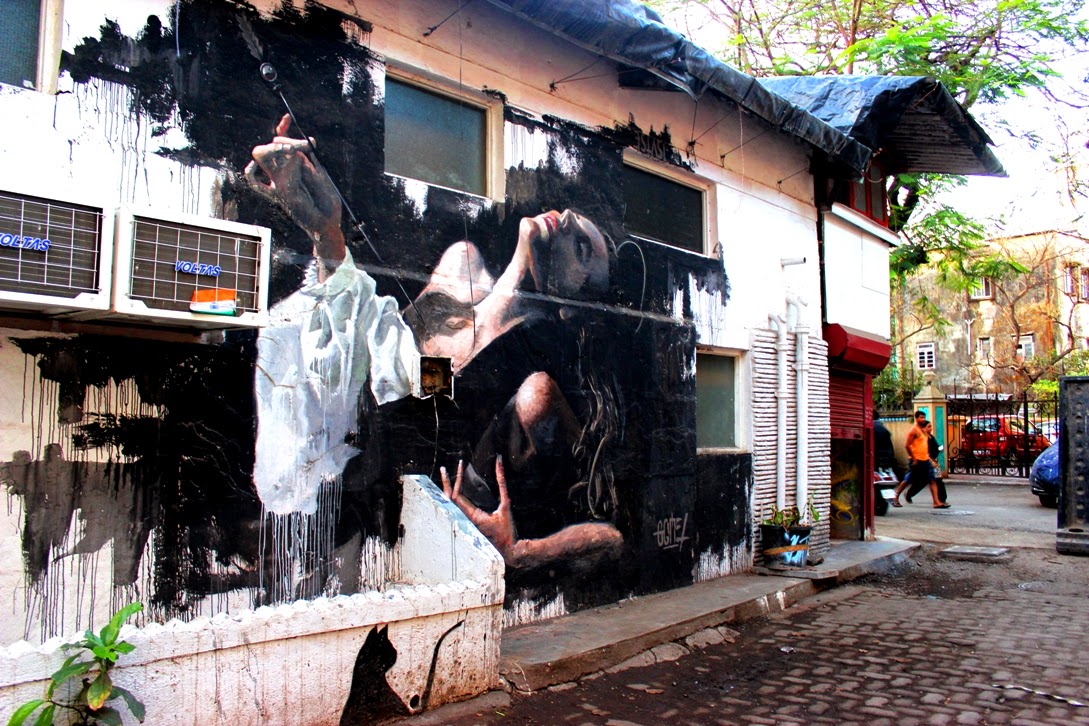 I found out later that this artwork is by Luis Gomez de Teran from Venezuela. He called this artwork "Veronica". That's the name of the lane where this wall is located, by the way. Sort of bringing the lane to life, giving it a dark, smoky, interesting personality :) :) I'm not sure what exactly Ms. Veronica is holding in her hand. Can you figure it out? And check out the cat at the bottom!

Near the turning into Veronica Lane, on the main road, you'll definitely spot the colourful Jude Bakery (well, ex-bakery. The guy who ran it died a couple of years ago, and now it's owned by a guy in the hospitality business, who is not baking bread here). The street art here has a tongue-in-cheek prayer, it says "Hey St Jude, please help me. I am really a lost cause." You can only read the whole message when the shutters are down. The artist is a guy called AkaCorleone. He's Portuguese, I think. A lot of his murals are lettering-based. 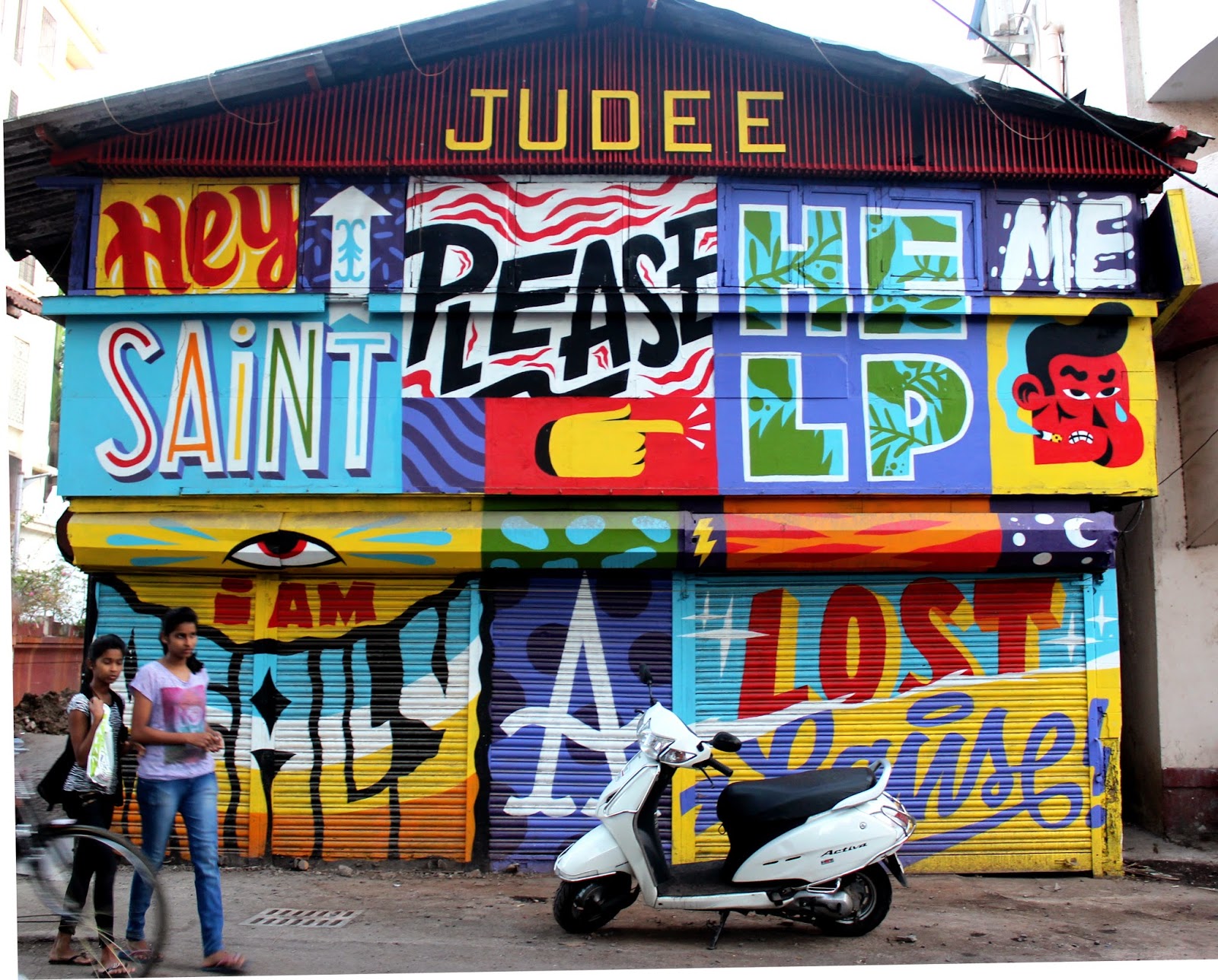 This graffiti below is older, but I hadn't photographed it on my earlier visits. I don't know who the artist is. The text alongside is in Hindi, it says paidaishi junglee (born wild). I smiled to myself when I saw the real bike parked under the graffiti, and I wondered which Bandra junglee owned that one :) 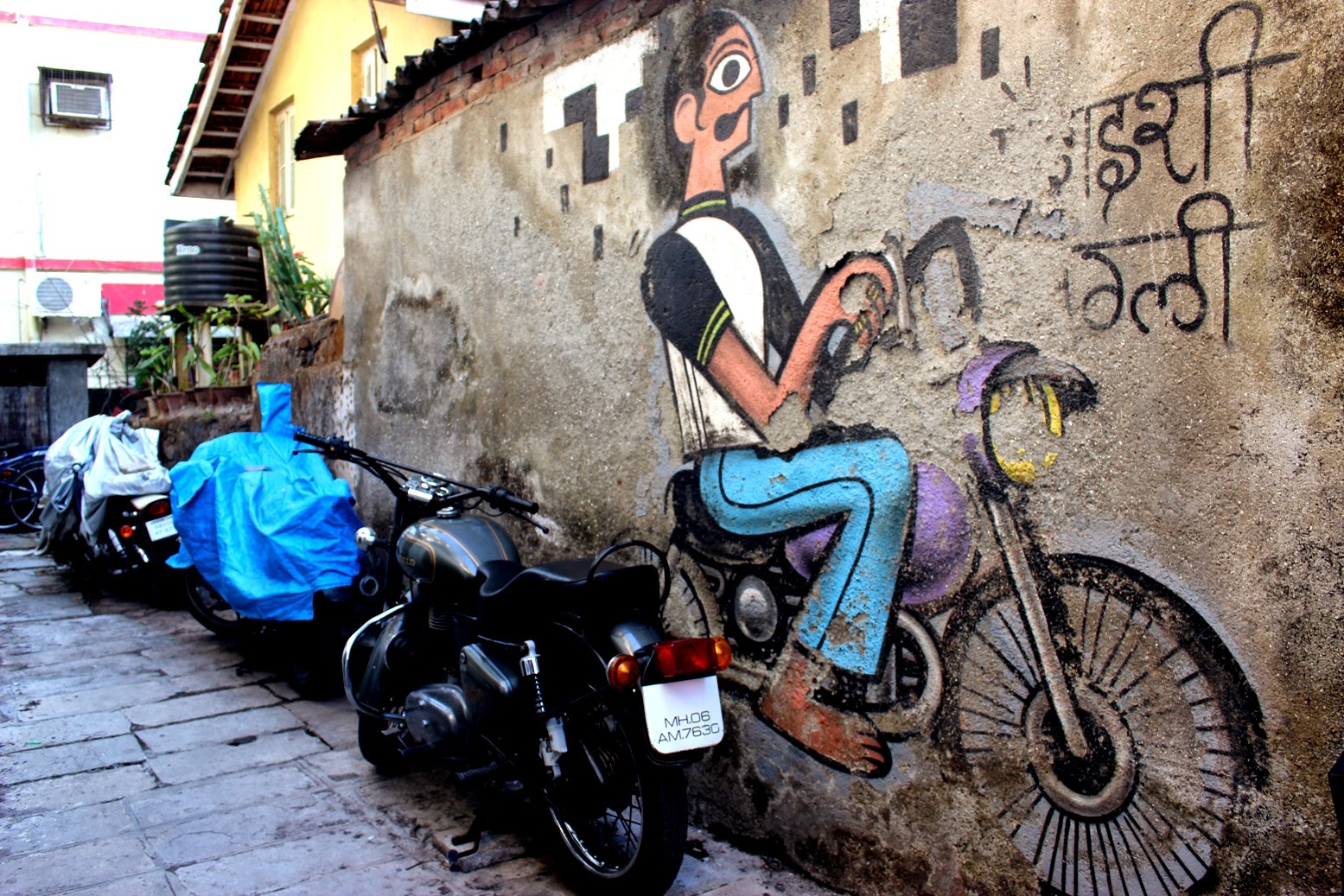 This one is from Chimbai Village. It was at the entrance of a tiny lane, and it made me want to immediately turn into the lane, to see where the little boy would lead me. It's by an artist called Tona, from Hamburg in Germany. Tona does stencils, so replicas of this little kid are in other cities as well. 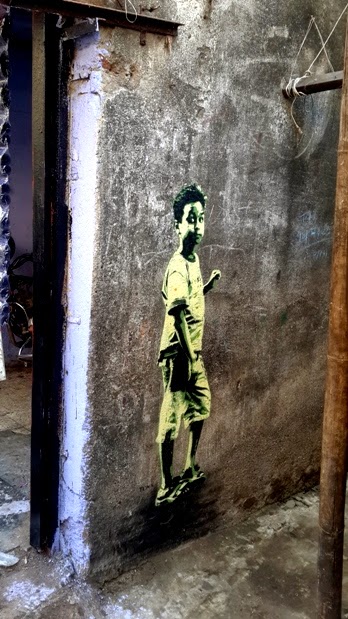 I walked down to the edge of the water in Chimbai and found lots more street art to photograph. Here's one of them, also by Tona. 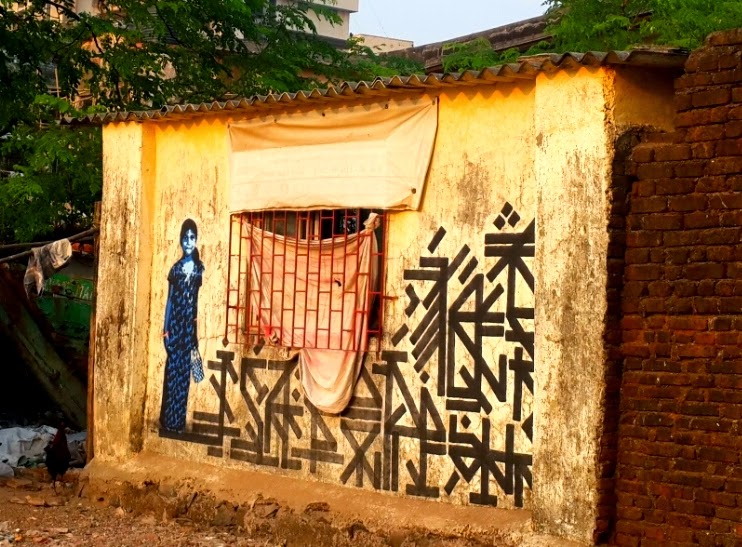 We spoke to some of the fishermen sitting nearby, and they told us about the artists who came from abroad and painted in Chimbai. The fishermen seemed to find the whole thing amusing but irrelevant. I bet a lot of people in Chimbai think that.

Personally, I'm all for street art, because I think it's great for art to come out of the expensive and elite gallery spaces, and into a place where it can dialog with people. Street art is such a powerful (not to mention potentially subversive) medium. We're just beginning to see street art in Mumbai. Maybe over time the people of the city - the ones whose walls and streets are being decorated - will become more engaged. It would help if the effort was more participative somehow. It isn't enough to just take art to poorer, dirtier parts of the city. There's got to a be a more two-way process if this whole exercise has to have any meaning.
Posted by Deepa at Wednesday, March 11, 2015 1 comment: