Why Loiter: Matunga on a Sunday Night


Why Loiter is a campaign that anyone can join from anywhere. The idea behind the campaign is very simple: it encourages women to loiter aimlessly about their city and make use of its public spaces :). In the face of victim-blaming and increased restrictions on women’s mobility, the campaign wants to create a sense of a community of women in public space, so that we can remind ourselves and other women that we are not alone.

This Sunday, I was going to meet a friend in Matunga. I saw the campaign on Facebook, so I took some pictures and hashtagged them #whyloiter. 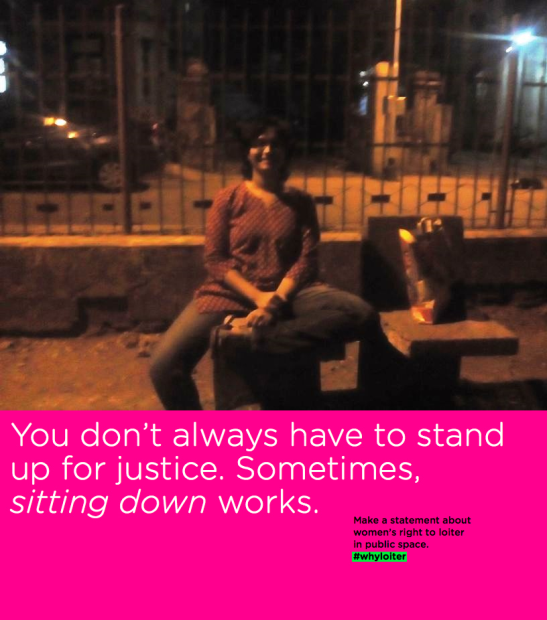 I took a short bus ride to bustling Maheshwari Udyan (King’s Circle) and met my friend for dinner at Spring Onion. The starters were especially good. We told ourselves we’d come back there some other day and eat only 3 or 4 starters, no need of main course.

Then we wandered around near Five Garden and chilled… some photography happened there. Turns out my phone is not great at night photography (or I haven’t found the correct settings). There were many other people - many young people - walking, sitting around, hanging out. 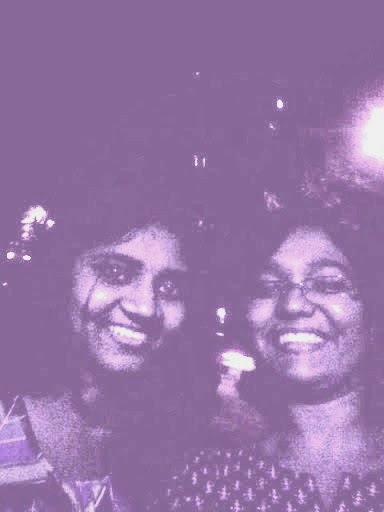 We walked back to King’s Circle for dessert at Natural’s Ice Cream (one berry and one coffee-cinammon/coffee-walnut mix). Strolled around the circle for a bit - stopped to look at a street book stall (open quite late - around 10 pm). Families, college students and many others also loitered there, enjoying the night air. Finally, I then took the bus home. 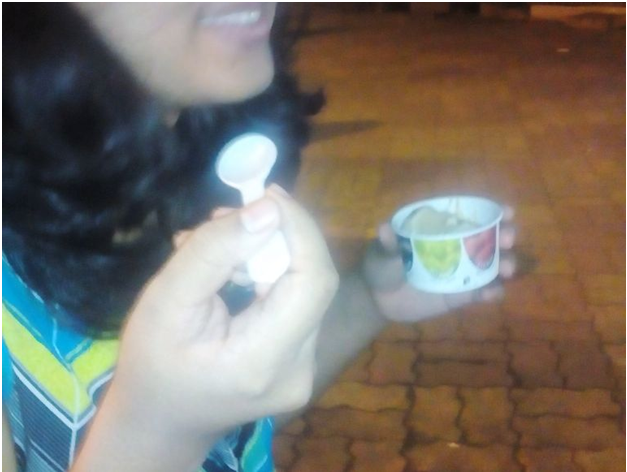 I love lazing around at home, sometimes even more than going out. But when I do go out, chilling in Matunga is one the nicest things. It has pretty streets and buildings, good food, street book stalls, gardens, and optimal crowds (not too few people to be lonely/deserted, but usually not so many people that it becomes very crowded).
--------------------------------------
It’s widely accepted that Mumbai is the most women-friendly city in India. Bombay girls are the most bindaas (carefree, without restraint). Women who move here from other cities are sometimes heard to remark on their newfound liberation. I myself love Mumbai. But even in Mumbai the freedom is not absolute and not something we take for granted.

“Why Loiter” is also a book (published in 2011) that explores the ways in which the women negotiate and navigate the streets of Mumbai, in a larger culture that thinks women and public spaces don’t do together. I’ve read part of it – it was great! – and plan to finish reading it soon. It’s a refreshing, inspiring take on gender, public space and freedom. 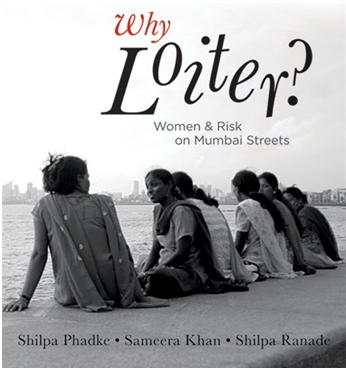 Why Loiter is a call for an end to fearmongering and for women to openly and confidently claim the streets. Loitering – taking up public spaces while doing absolutely nothing – is everyone’s right.
It calls on the government and society, not to provide paternalistic ‘protection’ by asking women to stay at home, but instead to begin providing the infrastructure (for example good public transport, street lights, public toilets) for women to feel safe. The book has many other interesting suggestions too. The final aim is freedom without fear.
Posted by Aishwarya Pramod at Wednesday, December 24, 2014 6 comments:

The Archaeology of Food: An Ancient Indian Meal

Recently I attended a very interesting workshop on food in ancient India, hosted by Rushina Munshaw Ghildayal (culinary expert) and Dr. Kurush Dalal (Asst. professor of Archaeology, MU). The combination of food and history was fun. I learnt about India's food heritage, met many like-minded people, and got a delicious meal in the end.

PART I: THE ARCHAEOLOGY OF FOOD
The workshop began with a talk by Dr. Kurush Dalal.
He spoke of the changing relationship between human society and food, from the Stone Age to the industrial age. He told us about the fascinating tools and techniques archaeologists use to find out what long-dead people ate.

For example in Mehrgarh (an Indus Valley site), ancient people are buried alongside goats - so we know they were probably shepherds consuming milk and milk products. Lots of traces of barley (and some wheat) show that they had domesticated these grains and were farming them.
Both the Harappans and Vedic tribes ate cereals, pulses, fruits, vegetables and meat. Spices like coriander, turmeric, pepper and cumin were used. Sounds like our modern Indian food? Not so fast :)

Ancient Indians did NOT have access to so many things: no cabbage, cauliflower, potato, tomato, chillies, groundnuts, corn, rajma, cashew, chikoo. No tobacco, tea or coffee. Today we can hardly cook without tomatoes or chillies, and we certainly can't give up tea and coffee.

The predominant grains we eat today are also different. For example, lots of barley and amaranth were eaten in ancient times, unlike today. Millets (which were a major staple as recently as 50 years ago) are losing ground to to wheat and rice. Plus, hybrid and uniform crop-types are taking the place of localized, diverse varieties of each grain.

Lastly, oil, salt, sugar and spices are widely available in modern times but were rare commodities for our ancestors. This made a huge difference to their cooking methods and recpies. I also learned that in ancient India, a spice called long pepper was widely used - now we mostly use chillies and black pepper.
PART II: THE MEAL
The talk was followed by a cooking demonstration and buffet, by Rushina Ghildayal. Rushina conceptualized and cooked the whole meal, using only those ingredients and methods that were available to ancient Indians.
Some close-ups of the food: 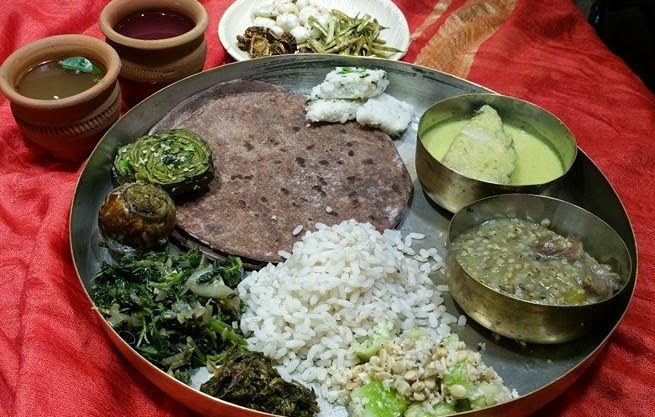 All in all, I came away very enlightened and very full!

If you want to know more about ancient Indian food, here are some links/books:

The beautiful red building in this photo is of Mumbai Samachar, the oldest continuously published newspaper in India. 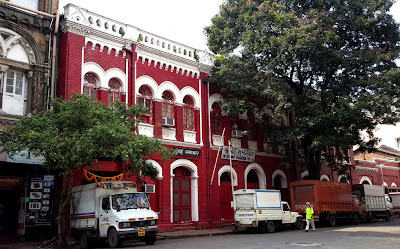 Mumbai Samachar was first published in 1822, in Gujarati, and is going strong even today. The building is very well maintained; the old Gujarati typeface on the signboard is intact, and it is one of the few industrial buildings from the 1800s still surviving in the Fort district.

As you can see, the Gujarati text on the signboard says "Mumbai Samachar" and the English version says "The Bombay Samachar". On the top left, it says "Bhaaratnu Sarvapratham Dainik" (India's First Daily). And on the top right is Sthapna (the year of establishment) 1822.

The art of Gujarati type-setting is more than 200 years old. Gujarati type was moulded in Bombay for the first time in 1797 at the Courier Press; by a Parsi named Behramji Jijibhai Chapgar.  Apparently, this Jijibhai was quite the typesetting genius. Robert Drummond, who wrote a book on typesets in 1808, described Jijibhai as an "ingenious artist" who without any outside help, "succeeded in completing a font of the Guzzeratty types".

Here is an excerpt from Drummond's book, showing what that 'Guzzeratty' type looked like in the early 1800's. It's not the same type that we see today. Jijibhai's original Guzzeraty type has undergone several changes in the 200+ years since it was first invented. Click on it for a larger view, it will be easier to read, and you can also enjoy all the folk wisdom in the book :)
Although the type-set was in place by 1797, it was used only for publishing advertisements. For a long time, there were no books or newspapers in Gujarati. There were approximately 200,000 people in Bombay around 1800 AD. Trade was thriving. The population included a significant number of Gujarati speaking people - Parsis, Memons, Bohras, Jains, Kutchis, and other Hindu Gujaratis. The time was ripe for a regular newspaper in Gujarati, to provide business news and trading information to these communities.

This gap was filled by Ferdoonji Murzban, a Parsi priest from Surat, who set up Mumbai Samachar in 1822. His story, like all stories of pioneers, is very interesting.

Ferdoonji was born in 1787 into a family of priests, and initially trained for priesthood. At the age of 18, he came to Bombay and learnt Persian and Arabic languages. In 1808 he opened a book-bindery, and made some money through an order from the East India Company. He decided to invest the funds in a printing press.

Ferdoonji was a friend of Behramji Jijibhai (who worked at the Courier Press), and would visit him there. Using Jijibhai's Gujarati type-set, Ferdoonji first published a Hindu panchang (astrological calendar) in Gujarati, at the grand price of Rs 2 per copy. That was in 1814, and it was a commercial success. I read that Ferdoonji's family, including the women, all worked together, helping to polish and set the type.

Ferdoonji was inclined towards religion and philosophy. In 1815, he brought out a copy of the Dabestan in Gujarati. The Dabestan, originally written in Persian in the mid-1600's, is a comparitive study of religions, and includes a detailed description of Akbar's Din-E-Ilahi. That Ferdoonji chose to put his earnings into this obscure work (there couldn't have been many takers for it!) points to the strength of his liberal religious views.

In 1818, Ferdoonji published the Khordeh Avesta, a Gujarati version of the Parsi scriptures, along with notes/commentary. It got him into huge controversies with the more orthodox elements of the Parsi community (I'm not sure whether it was the translation or his commentary that got him into hot water!).

But like they say, all publicity is good publicity :) Ferdoonji weathered the storm and in 1822, he went on to publish the Prospectus of Mumbaino Samachar, a bi-weekly newspaper in Gujarati. Like the panchang, Mumbai Samachar was a super-hit. Within weeks, it was fully subscribed. Among the 150 people who initially subscribed, there were Parsis, Hindus, Mohammedans and Christians (Europeans).

Mumbai Samachar was meant for the business community, and filled a much needed gap. It featured local appointments, ship docking schedules, and news clippings from Calcutta and Madras, which were the two other important British centres at the time. There was also news from London, and the prices of opium from Canton in China.

The paper went from strength to strength, and still continues to function today (although Ferdoonji was actually forced to leave Bombay and settle down in Goa, due to his religious views). 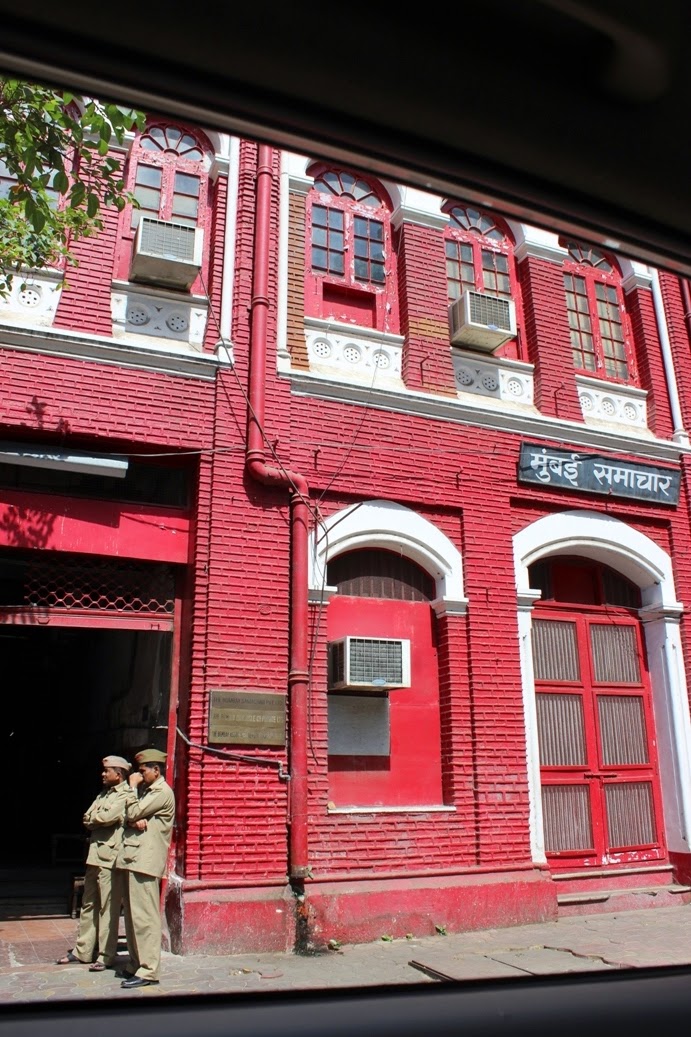 The street on which the newspaper is located is called Bombay Samachar Marg. It is currently owned by the Cama family, and run by Hormusji Cama. If you ever go walking in Horniman Circle, stop by and admire the building. Often you'll spot Hormusji's maroon 1959 Chevy Bel Air parked outside (he is a vintage car enthusiast).

I drove by recently and saw two uniformed men standing at the gate. I'm not sure if they work there. But I was comforted by the feeling that the doors of Mumbai Samachar were still open for business, keeping the memory of Ferdoonji Murzban and Jijibhai Chapgar alive.