There's a little pink house in Dharavi, where dreams are made. 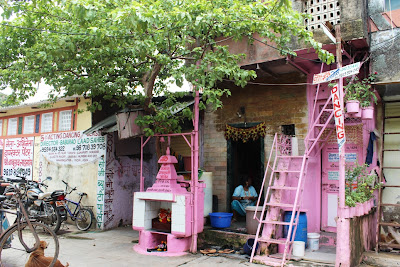 When you look at it, it doesn't seem very different from many others in the area. What sets it apart is kids like this one below, who come here with stars in their eyes. 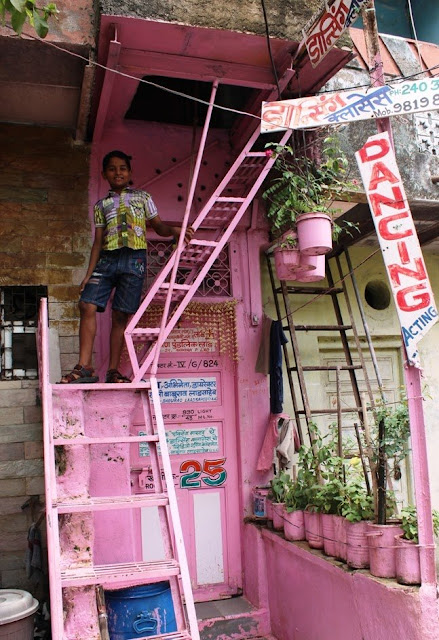 This little kid is Gulam Mustafa Khan. He is 11 years old, and he wants to be a movie star. Every Sunday, his mother brings him to this little pink house, to learn acting and dancing. 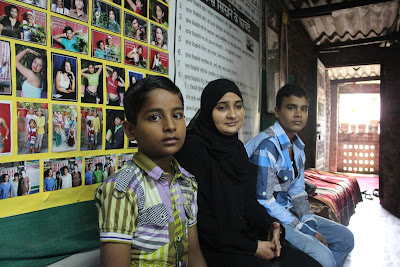 Sitting next to Gulam and his mother is Ikram. He is Gulam's "mamu" - his mother's brother. Irfan wants to become a dancer.


And here is the man who they hope will make these dreams come true: Baburao Lad. Producter, actor, teacher, dancer, painter, photographer - Baburao is a multi-talented guy who polishes and converts Dharavi's many hopefuls into star material. 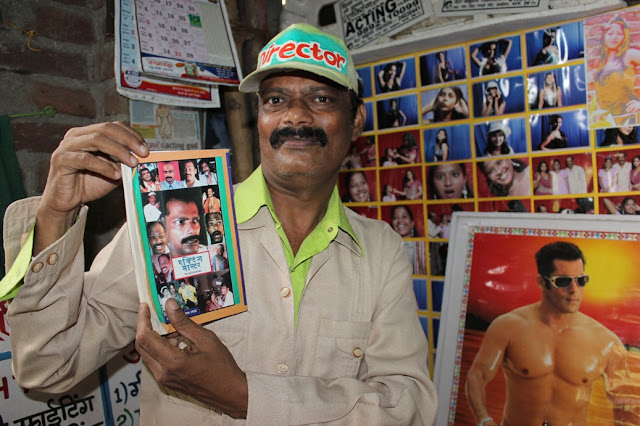 Baburao has even published a book: it's called Acting Master, and it has all the do's and don'ts for success in Bollywood. The loft of the pink house is Baburao's studio, where the magic happens. 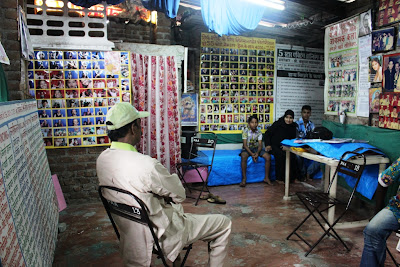 I watched as a Bollywood number was taught. 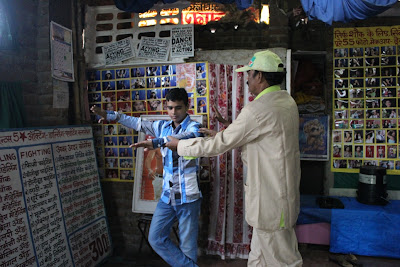 The moves are just what every fledgeling Bollywood aspirant needs - straight out of popular films. I asked Gulam what he was learning. "Rowdy Rathore", he said to me. "I'm learning acche acche steps from Rowdy Rathore." 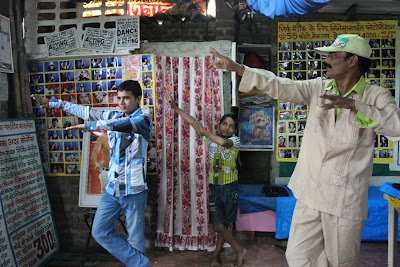 But dancing is not enough if you have to be a star. So Baburao teaches acting, fighting and modelling. 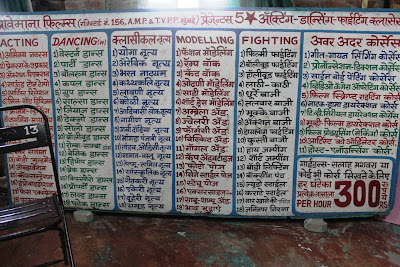 And all manner of other skills: 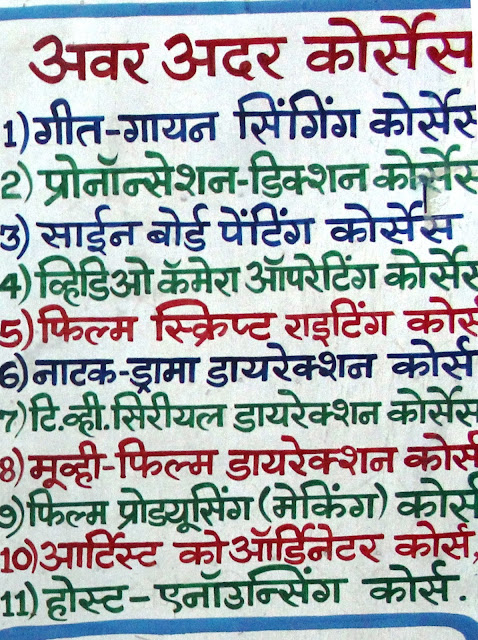 The classes cost Rs 500 per month, with a Rs 2000 joining fee. This is far less expensive than similar classes in non-slum areas. But going by the number of eager folks coming to the class, it looks like in this pink house at least, the City of Dreams is alive and kicking. Enjoy the show :)

One rainy evening at Bandra Fort

The old Portuguese fort in Bandra is one of Mumbai's favourite hangouts in the rain.

There's a fantastic breeze, with great views of the Arabian sea and the Worli Sea-link. Families, college kids, lovers, everyone comes here to hang out in the evenings. Naturally, the bhelwalla does brisk business. 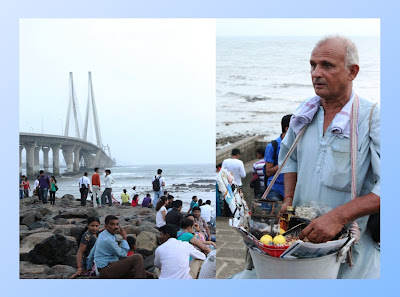 Seen from the top of the fort, the tad palms and the sea remind you of Mumbai's original landscape, as it existed before Bandra developed and grew into what it is today. 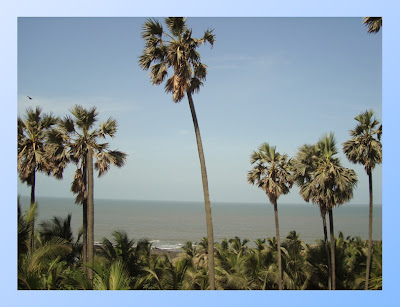 In the 1640s, the Portuguese built a fort here, called Castella de Aguada - the Castle of Water. 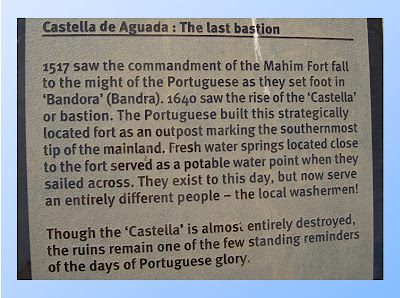 The fort is still there, and it has unbroken views of the Sea Link which is behind it. 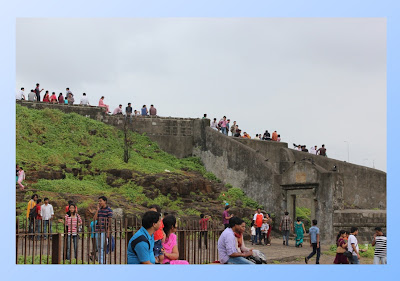 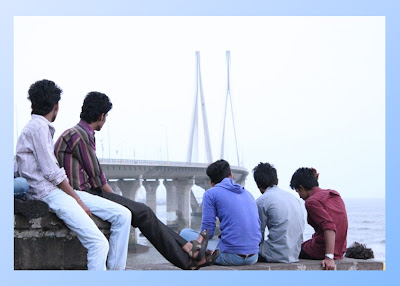 Further down the road, you can see folks hanging out near Shah Rukh Khan's Mannat. There's a little garden here, nice for spending time with friends, plus the added bonus of a possible star sighting. The cafe nearby has windows with sea views. 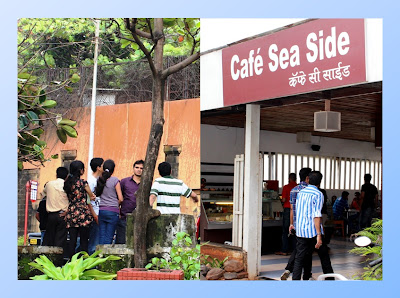 Along the Bandstand promenade, there are lots of people walking, sitting, talking, kootchy-kooing...I decided not to click photos of the many romances - didn't want to get any of them into trouble! There are lots of pretty girls around, adding to the glamour quotient of the place. Check it out sometime!
Posted by Deepa at Friday, July 13, 2012 8 comments:

Sometimes you walk past something without realising just how beautiful it is. And then you pause.

Here she is, the Goddess Flora, on the top of the fountain. Beautiful, no? 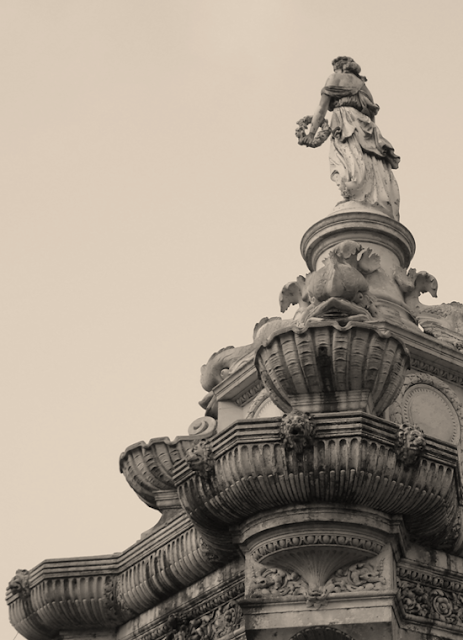 She's right in the middle of the busy financial district. Rather incongruous, really, when you think that Flora is the Roman goddess of spring, of flowers and fertility. What on earth is she doing so close to all these banks and the stock market? :) :) 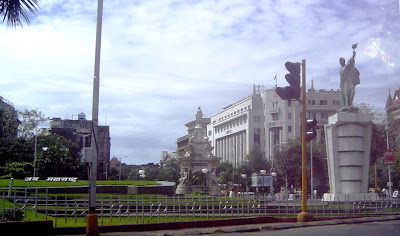 Actually, there's a very simple reason why this fountain has Flora as the theme - it's because the guys who built it were the Agri-Horticultural Society of Western India (AHSWI). But why would an obscure-sounding society like that build a fountain in a city? Where would they get the money in the first place? I did some digging around, and as it turns out, the Society was anything but obscure.


Originally founded in 1820 in Calcutta by William Carey, the Agri-Horticultural Society of India was responsible for introducing a wide range of crops in India. From all over the world, they brought varieties of maize, cotton, sugarcane, potatoes, and ginger for cultivation and hybridization in India. They introduced cinchona (from which quinine is derived). They established beautiful gardens, they documented the flora of the country, published journals, and held competitions and shows. In effect, they were the Agriculture Ministry in India well until the 1900's.

The photo above  is of their garden in Alipore, Calcutta. It is spread over 21 acres, and contains many rare plants. The British were a nation of garden lovers and their legacy lives on in the various regional versions of the Agri Horticultural Society of India.

Anything Calcutta did, Mumbai had to do better :) The Agri-Horticulture Society of Western India was founded in 1830. The first garden was set up in Sewri, and was soon appropriated as a cemetery for Europeans (see photo below from CNN-Go).

In Mumbai, the Society had some interesting people as members - a mix of great intellect and great wealth.

Among the intellectuals was Dr. George Birdwood (Anglo-Indian, born in Belgaum, educated in England), who was Principal of Grant Medical College Mumbai. He wrote several books, including a "Catalogue Of The Economic Products Of The Presidency Of Bombay",  "Practical Bazaar Medicines: With Over 200 Useful Prescriptions", and a treatise on incense. In short - a man who knew his plants. 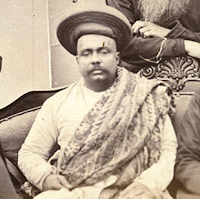 The other intellectual in the Society was Dr. Bhau Daji Laud (see photo alongside), who rose from humble beginnings in Mandrem (Goa) to twice become Sheriff of Mumbai. He shared Birdwood's interest in botany, studied the Sanskrit literature of medicine, and tested traditional drugs to which Hindu texts ascribed marvellous powers. These two then, were the brains of the Society. Among the wealthy notables in the AHSWI were ace businessman Jagannath Shankar Seth, David Sassoon (the Jewish merchant-prince) and Jamsetjee Jeejibhoy (1st Baronet).


It was David Sassoon who donated his land in Byculla to create the loveliest garden Mumbai had ever seen - the Victoria Gardens. Spread over 48 hectares, the garden was established under the direction of Dr. Birdwood and Dr. Laud. It had beautiful architecture, and was planted with rare trees and shrubs. It  continues to be a green solace to the people of Mumbai. 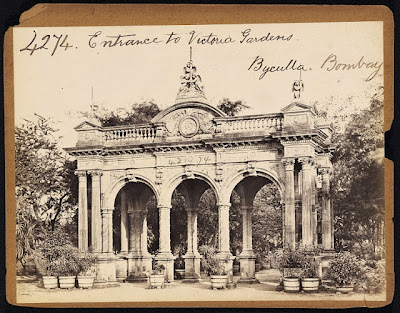 So as you can see, gardens and flowers and plants and crops were quite the fashionable thing in Mumbai in the mid 1800's. The idea of celebrating Goddess Flora was perhaps just a sign of the times. The money for Flora Fountain came from a Parsi gentleman: Mr Cursetjee Furdomjee Parekh. He was a partner at Jamsetjee Jeejibhoy's firm, owned many ships, and like many merchant-princes of the time, made a significant fortune in trade with China and Europe.

The sculptor was James Forsyth, who had earlier worked on a beautiful Flora  Fountain in Witley Court, Worcestershire, England (that original fountain was damaged and is now being restored).

The Flora Fountain in Mumbai was carved of Portland stone in 1864, and installed in the place where Church Gate stood. Here  are a couple of more photos; this is the base of the fountain, and you can see how these carvings represent the bounty of nature. 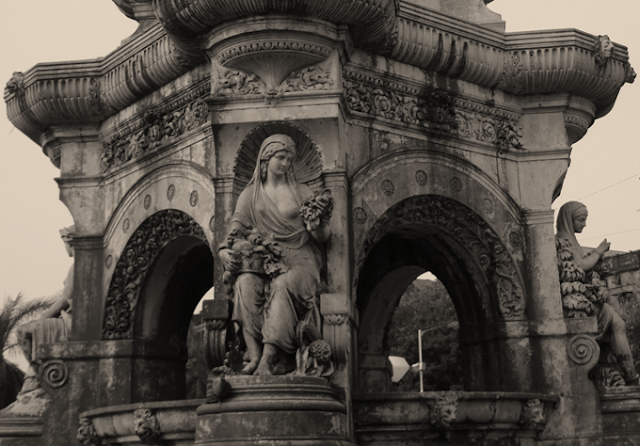 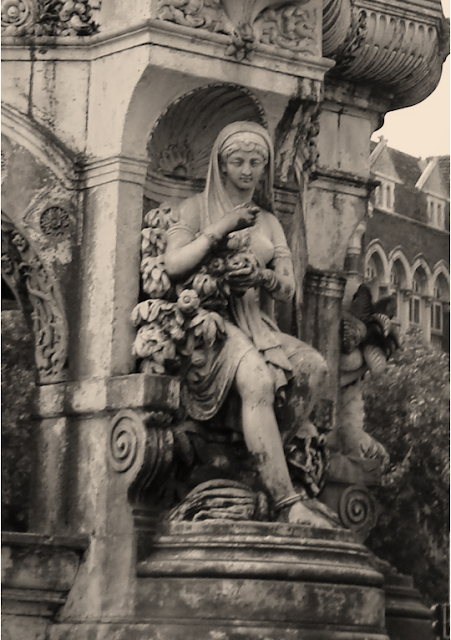 The anklets on her feet are interesting, she looks almost Indian, doesn't she? Is that a sheaf of wheat at her feet? I tried to look it up, but couldn't find more information about the design of the female figures. If you know where I can find information online, do let me know.
Posted by Deepa at Sunday, July 08, 2012 3 comments: