The Wholesale Flower Market at Dadar


On a rainy day, the wholesale flower market in Dadar is a great place for photography enthusiasts.


It is an indoor market, so you can walk around without worrying about getting your camera wet. Of course, you have to slosh through a messy floor, but the colours are so fantastic that it is well worth it. 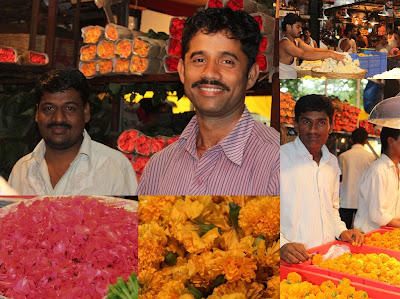 The business is wholesale, and flowers are sold in bulk to wedding decorators and event managers. A lot of business is transacted over the phone (repeat customers, established relationships). But many people come to haggle and buy, especially when they need a lot of flowers. Also, small local flower-sellers in the city  come here in person to buy their daily stocks. They buy not only flowers, but also the leaves that are used as wrapping, and thread as well, to tie it all together. 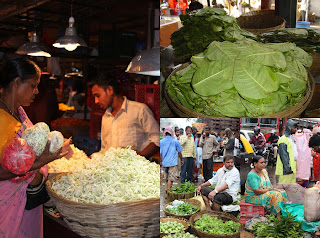 From the wholesale market, these flowers then make their way to local street stalls, to be fashioned into garlands or "veni" for the hair. I clicked this photo of one flower-seller at our local market, she was stringing a garland in the traditional way using her toes to hold the thread. 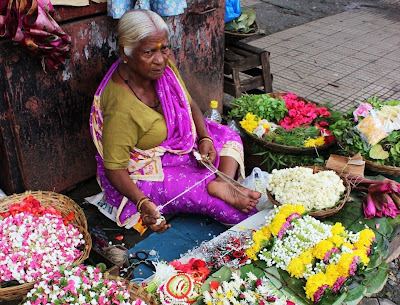 Isn't this veni gorgeous?!! Makes me wish I had longer hair, just so that I could wear this! 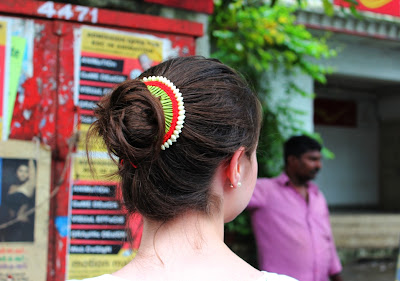 The best time of day to go to the Dadar flower market is early in the morning, when the flowers arrive. The stocks are freshly stacked, phones are buzzing, buyers are haggling and business is brisk. By about 9:00 a.m. the day's major business almost comes to a close, although there are many shops still open until 10:00 a.m.
Posted by Deepa at Sunday, June 24, 2012 13 comments:

It's raining outside, and in this kind of weather, I can't stop thinking about chai!

Hot, sweet, milky, chai. Especially from the chai-shop outside our office. This shop goes by the uninspired name of Prince Milk Center, but their chai is to die for. Maybe it's the huge amounts of sugar they add to it, or the way they keep boiling it until the milk acquires the rich, condensed smell of kheer. Who knows? All I know is, I absolutely crave it everyday. (Yaaaaaaaaargh. It's Sunday today! I have to wait until tomorrow to drink it!)

Meanwhile, as a consolation of sorts, I found a cool chai-inspired T-shirt at the Tantra website. It has a chai-wallah doing his usual rounds with a dented aluminum kettle and half a dozen cheap tea-glasses (you can click on it to see a larger image, I love the quirky illustration). 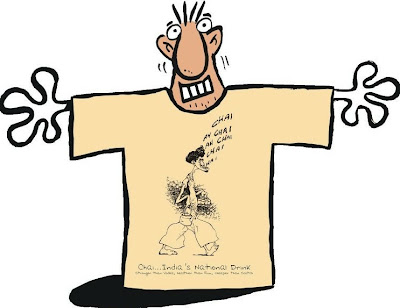 The T-shirt is prompted of course, by the Planning Commission's announcement that tea will officially be declared the national drink of India from April 2013. If the Russians and Scots and everyone else can have a national drink, so can we! 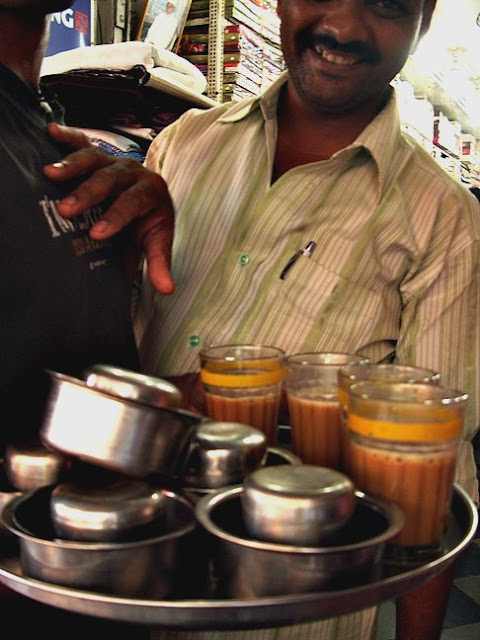 According to an ORG-India Tea Consumption Study, 83% of homes in India drink tea. I find this a bit hard to believe, considering how many people can't afford even food. And there is a substantial South Indian population who drink coffee.

Anyway, according to this same study, tea is also the cheapest beverage in the world after water. Perhaps, perhaps... But not in Mumbai, where our office tea guy charges Rs 14 for a "special masala chai" and Rs 10 for a "regular" chai.  Fortunately, he offers "cutting chai" (tea served in half-glass portions), which makes his regular chai a very affordable 5-rupee addiction.

One of the nicest things about being in the travel business is that you get to travel all over the country. This also means endless opportunities to try tea in all sorts of places. I've had fantastic chai in remote little villages, highway dhabas, mid-size towns and big cities.

This year, the best tea I've had was at a small non-descript tea-stall in the Old City of Ahmedabad. It was early morning, and we were on a "pol" walk through several heritage neighbourhoods. Mid-way through the walk, we stopped for chai. The entire neighbourhood was quiet, and just this one stall had its burner going and tea on the boil. The owner was a glum sort of fellow, not the chatty smiling variety. But he quickly served us chai in a simple white cup-and-saucer, and in the cool morning hours, the taste was simply divine. 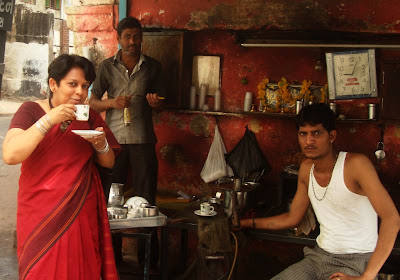 Post Script: After I finished writing this story, I spotted yet another chai T-shirt, this one from Tribal Route. 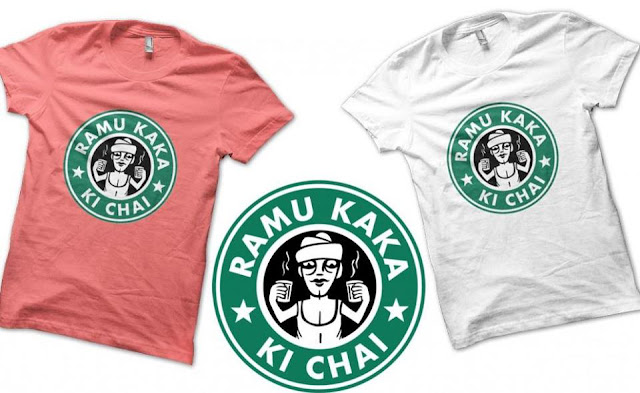 And they have a funky Bollywood-theme chai kettle, very cool, no? 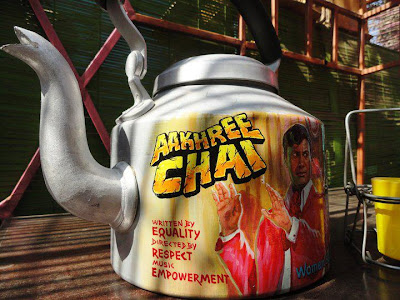