Mumbadevi Temple - The legend of the goddess Mumba


Mumbadevi is the patron goddess of Mumbai; the goddess after whom the city gets its name. But do you know her story?


When I went looking for more information, here's what I found: a textual reference called Mumbadevi Mahatmya.

Mumbadevi Mahatmya - the Glory of Mumbadevi - is a set of 52 verses in Sanskrit, estimated to have been composed somewhere in the period 16th to 18th century. In 208 lines, it tells the tale of how the goddess got her name.

In ancient times there was a daitya (demon) named Mumbaaraka. He obtained a powerful boon from Brahma, that he could not be defeated by man or animal or yaksha or gandharva. The people went to Vishnu, who along with all the gods, went to Kailasa to petition Siva. From Siva's mouth there emerged a shining bit of his essence. Other gods similarly gave a part of themselves. This combined to form the goddess Mumba. She mounted the lion of Ambadevi and waged battle with Mumbaraka, and defeated him. He was banished to patala (the netherworld). The goddess assured the people that she would take the title of Mumbadevi and reside on the island to protect them.


The poor quality of the Sanskrit and the grammatical errors in Mumbadevi Mahatmya suggest that this text was composed by someone without much education (and not much imagination either, by the looks of it).


Like all other mahatmyas, the text clearly outlines the benefits that will accrue to worshippers of Mumbadevi. For me personally, the chief benefit of visiting this temple is that I can eat the famous jalebis from the corner shop! But according to Mumbadevi Mahatmya, if you desire heath, prosperity, children, victory in battle, or the power of oratory, then it's a good idea to worship this goddess.


Also, the author suggests that those who desire Mumbadevi's good graces should feed Brahmins and give them dakshina (donations). This is easily done: there's no shortage of dakshina-hunting Brahmins outside the temple, looking to tie red threads around your wrist.


Earlier texts such as the Mahikavati Bakhara (Story of Mahikavati) and Bimbakhyana (Story of Bimbadev Rana) which date to 15th and 16th century do not have any mention of Mumbadevi. Thus it is possible that this goddess gained prominence only in more recent times.

Mumbai-based researcher and lecturer Suraj Pandit suggests that the name 'Mumbaaraka' bears a close resemblance to Mubarak; and perhaps the reference is to Sultan Mubarak Shah of Gujarat who ruled over the area in the 1300's.

Late medieval mahatmyas, says Suraj Pandit, often preserve historical events through a retelling framed in a religious narrative. Perhaps the tale of Mumbadevi is one such story.

Established in 1910, Mama Kane is one of Dadar's old names. The founder, Narayan Vishnu Kane, and his widowed sister, worked very hard to establish this eatery. 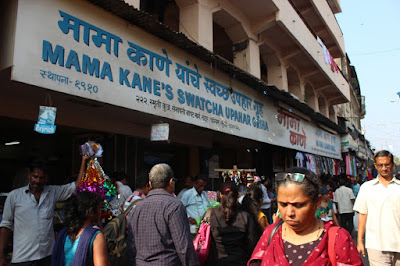 A lot of Konkanastha Brahmins / Gaud Saraswat Brahmins worked in this eatery. In fact, the original name was Dakshini Brahmananche Swacha Uphargriha, indicating this little eatery's roots in the cuisine of the Brahmins of southern Maharashtra. But it was more popularly known as Mama Kane, as this is how the founder was called. 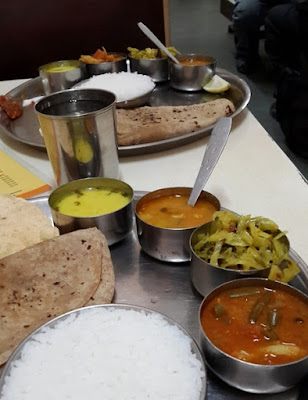 Mama Kane died during the second world war; and I read a blog which said that family and employees had to wait at Shivaji Park crematorium till sunrise as cremation was forbidden at night due to Black Out.

This restaurant was one of the earliest in Mumbai to put batata-vada on the menu. I enjoy the simple thali when I go to Dadar flower market. I also enjoy the kothimbir vadi a lot. The nicest thing about Mama Kane is that it is large, with high ceilings and I feel instantly like I have entered a time warp. 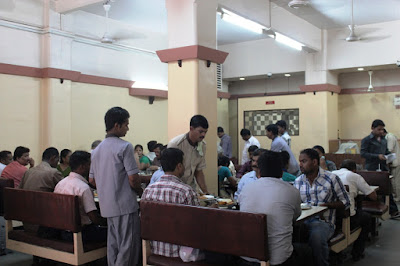 Here is the old fashioned billing counter, and various delicacies which they sell at the counter. 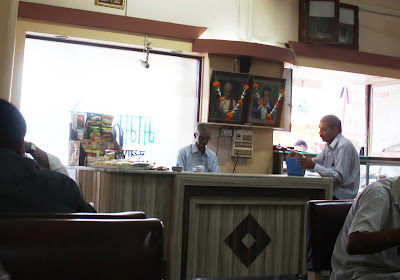 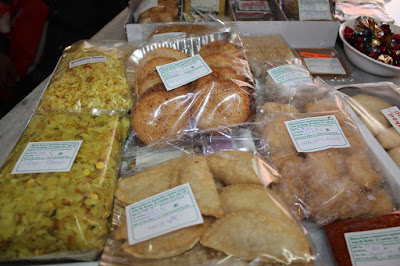 By the way, I also love Mama Kane because they won't serve you new-fangled things like Pepsi or Coke :) They have their own menu of "thanda pey" (cold drinks and sherbets), and I highly recommend you try those to cool down this summer!
Posted by Deepa at Wednesday, May 04, 2016 6 comments: