Recently I was walking in Churchgate when I saw a beautiful red double-decker go by.

I have so many fond memories of these buses! As children, we loved to ride the top section, especially the two front seats with views. We would clamber up the stairs as fast as we could, hoping to beat everyone else to the prized seats. 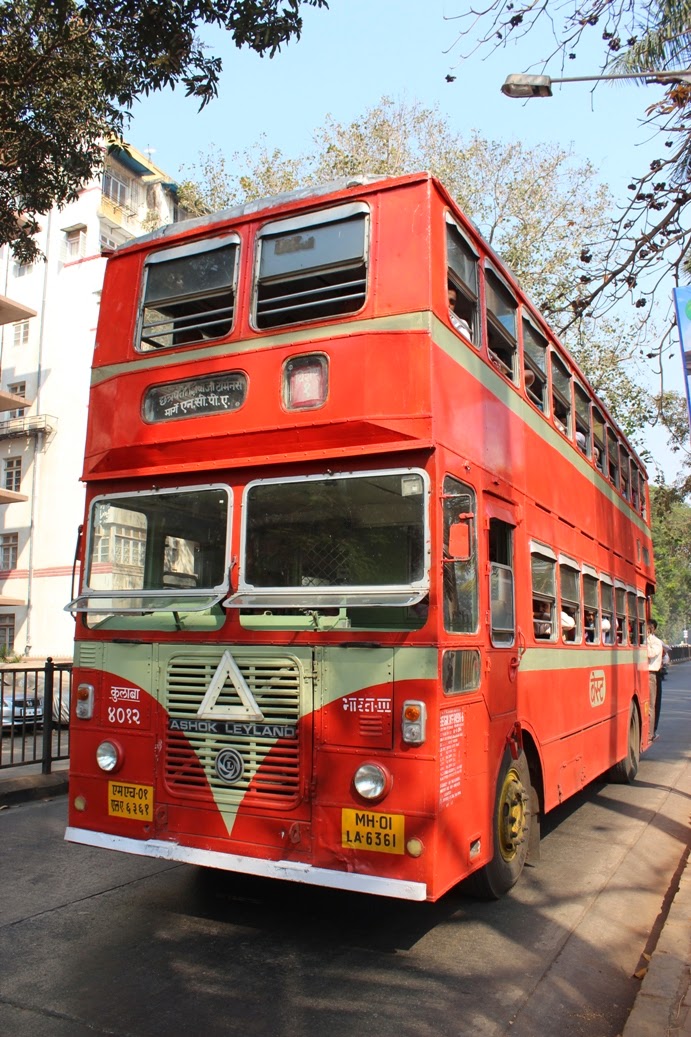 I looked up the history of the double-decker, and found some interesting tidbits. Did you know that the earliest "double decker" buses actually pre-date the combustion engine? They were horse-drawn, with open decks on top :) To access the top deck, you had to use a ladder.  In fact, horse-drawn buses continued in rural areas of the UK until 1932.
Motorised double-decker buses came to India in 1937, but not to Mumbai. It was in Trivandrum that they first appeared, because His Highness Sri Chitira Thirunal Balarama Varma, the ruler of Travancore decided to modernize the Travancore State Department of Transport. 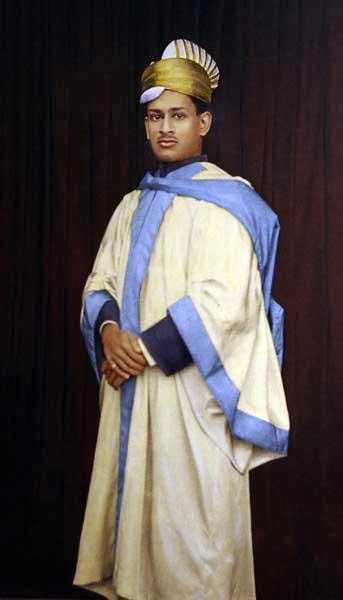 He appointed a Superintendent, Mr. E G Salter, who used to work for the London Passenger Transport Board. Engines and chassis were imported; and the bodies built locally under Mr. Salter's supervision. Within a year, there were 34 buses ready.

A grand inauguration was organised. His Highness and the royal family were the first passengers on the inaugural bus service in Trivandrum. Mr. Salter, the Superintendent, drove the bus himself! What a fun spectacle it must have been, buses trundling along with the rajah in the lead!

In 1938, motorised double-decker buses started plying in Mumbai (by the way, BEST claims it is 1937, and the Kerala State Transport insists that Mumbai got its buses only in 1938).  I cannot find photos of these buses, but I think they probably looked like the STL buses built by AEC in the UK. They were first introduced in 1932 in London, and became hugely popular. They were the standard bus in London for nearly a decade. So it stands to reason that Mr. Salter used this bus as the basis for his Indian fleet.
By 1947, there were 242 double-decker buses on Bombay roads, and they were considered a good way to deal with the city's growing population. I gotta ask my mom if she remembers these; and whether they had front-boarding or rear-boarding.

In 1954, another popular double-decker bus appeared in London, the Routemaster. It used two types of engines, either an AEC engine or a Leyland engine. It took the double-decker world by storm, and became an instant hit. A variant of the Routemaster began to be manufactured in India by Ashok Leyland with 50% of the components sourced locally. The first Indian version of the Routemaster was called 'Titan' and it made its appearance in Mumbai in 1967.
Since then, Ashok Leyland's Titan (and its children and grandchildren) have been plying in Mumbai. There have been model upgrades and improvements over the last 75 years. But their numbers have been decreasing. Today there are only 121 such buses in the city, and they are operated only along long-distance routes (they are economically unviable on shorter routes). Older buses have been relegated to the scrapheap, and dismantled for the metal.

Meanwhile, the original Routemasters were discontinued in London in 1968, and now only a few continue on some heritage routes. I wonder if the Bombay double-decker also will be discontinued soon :( Currently, the BEST is offering a rental scheme, where you can hire an open-deck double-decker for private use.

MTDC runs an open-top bus tour on the weekends in the evenings. It is called Nilambari, and the bus is painted blue (can't say I like the colour). I haven't tried the tour, but it looks like a great alternative to scrapping the buses. I hope that MTDC beefs up this tour with more publicity and creates a permanent place for the double-decker in Mumbai's future. 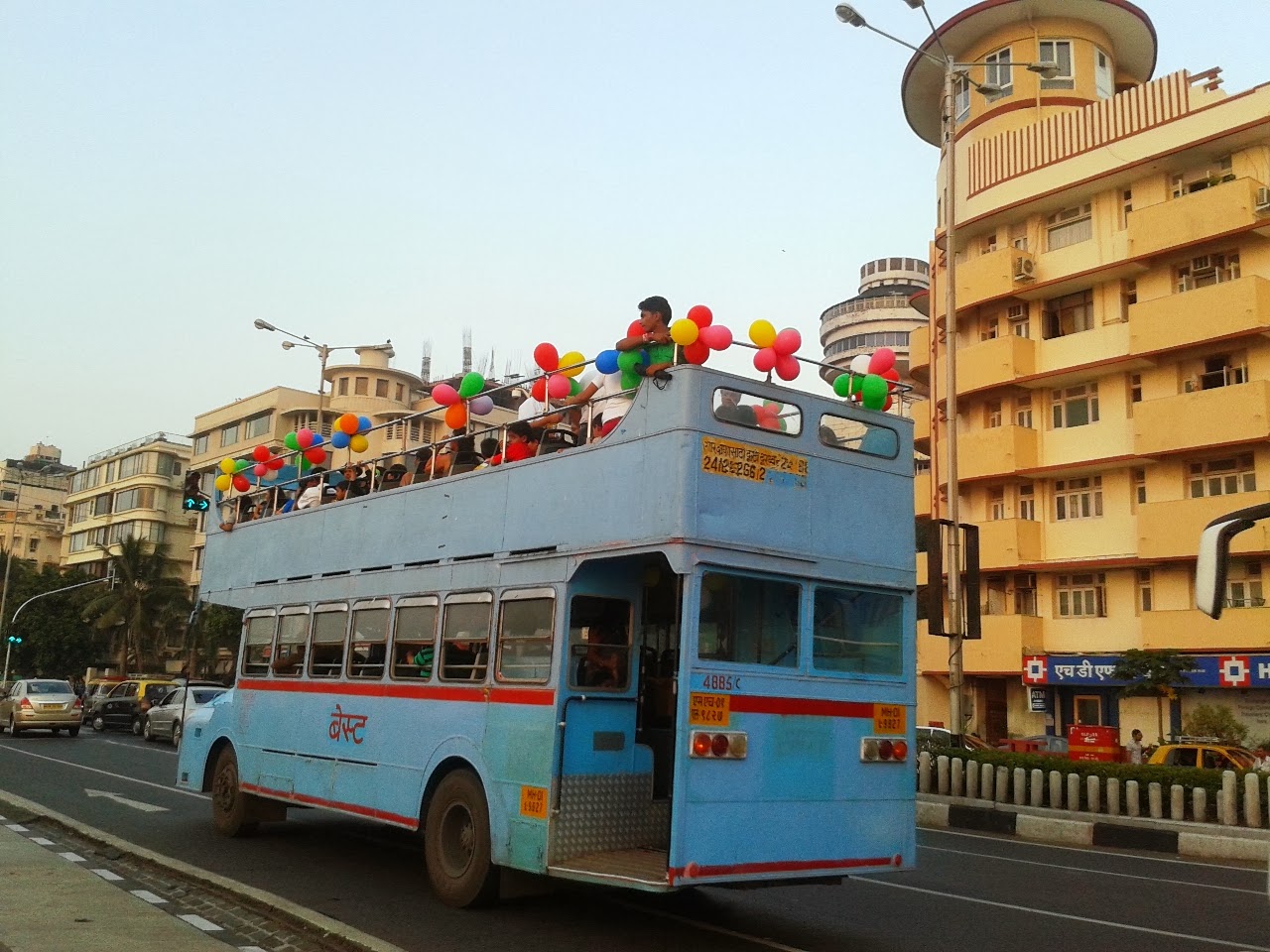 Speaking of the future, the man who has already created a unique permanent place in Mumbai for the double-decker is artist Sudarshan Shetty. Amidst the steel and glass structure of the Maker Maxity office complex in BKC, Shetty has installed a Flying Bus; a double decker with glittering metallic wings. The bus is the venue for different art installations; in effect, it is an art gallery. 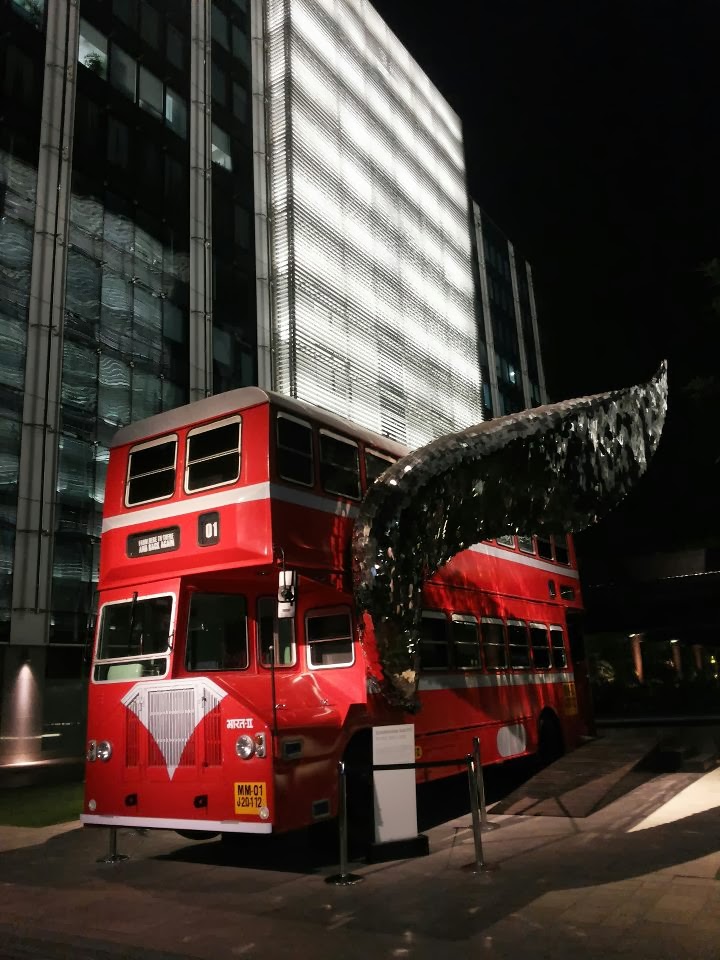 I loved the bus the minute I set my eyes on it. It is simply gorgeous, isn't it? To me Sudarshan Shetty's Flying Bus represents the hidden potential of the everyday objects we take for granted. Go take a look at it if you are ever in BKC.
Posted by Deepa at Sunday, February 23, 2014 13 comments: