You know it's the monsoon when...

...the sea is a sullen brooding brown even when the sky is bright blue.
. 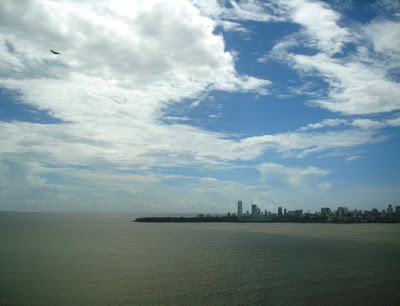 The tip of Malabar Hill, where the curving Backbay begins
. 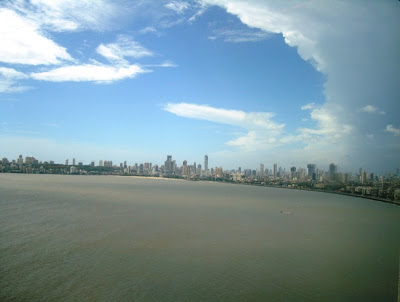 The rest of the curve - Backbay Reclamation
.
Photos from the Club floor of the Trident, Nariman Point. What an amazing view!
Posted by Deepa at Sunday, June 28, 2009 7 comments:

I visit the Wholesale Market at Vashi

- By Deepa Krishnan
.
Ever since the wholesale market moved from Byculla to Vashi, I've been wanting to go there. On a recent trip to New Bombay, my friend Satyen took me to see what is officially called The Mumbai Agricultural Produce Market.
. 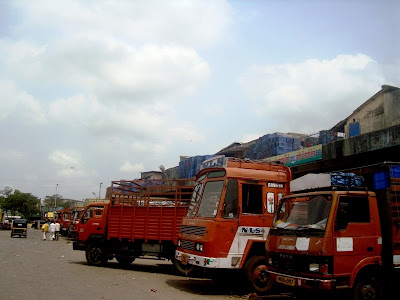 Exterior view - one small section of the market.

Even before we went in, I realised I was going to see a big market, but as we kept driving along, I realised that this market was literally endless! Nothing had prepared me for the sheer scale of what I saw.

The agricultural produce market covers all of 170 acres (hah! and I had originally believed I could explore it on foot!). There are a staggering 3700 godowns, 1500 commercial blocks, 4 large auction halls, 2 giant warehouses, and 5 large wholesale market yards. Apart from this, there are big processing centres - a vapour heat treatment plant, ripening facilities, cold storage facilities, an export facilitation centre and so on.

To me, it was like seeing a vast new exciting trading town, where trucks trundled in with every conceivable type of agricultural produce from the country. I could see hundreds of farmers, in their white Gandhi-topis. There were many women too, in their traditional Maharashtrian sarees. There were literally thousands of workers, transporting bags of produce. It was only much later, when I saw the website of the market committee, that I discovered that this is Asia's largest regulated market for agricultural produce.

As we drove around, Satyen pointed out to me that there is not one market, but five different markets. Market I is dedicated to spices and condiments, sugar, jaggery and dry fruits. Market II is where trading in foodgrains (rice, wheat) and pulses takes place. Then there's the popular "kanda-batata markit" - The Onion and Potato Market, which was the earliest to be set up. Other than these, there are two more markets, the Fruit Market and the Vegetable Market. For a "city girl" like me, it was like getting a glimpse into an alien world.

After the first few minutes of driving around, I gave up trying to grasp it all, and just enjoyed the atmosphere of the place. At the vegetable and fruit markets, I couldn't resist getting out of the car and clicking a few photographs. 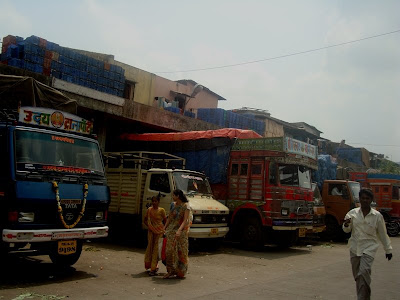 Gujarati housewives at the wholesale vegetable market
The first thing I noticed were some enterprising housewives, who had come to buy their weekly store of vegetables at wholesale prices. Satyen explained that some housing societies had formed groups, so that they could come here to this market and purchase in bulk for their needs. 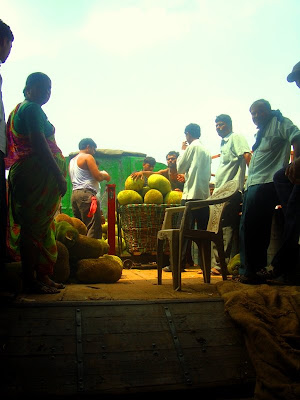 Weighing scales on truck
I walked around to the backside of a truck to see what was happening. Jackfruit was being unloaded from the truck. Before the unloading, it was being weighed in a basket. This is a regulated market - that means that the weighing instruments are provided by the market, and there are fixed rates for the people doing the unloading. 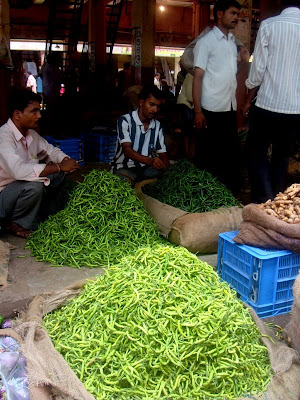 Green chillies inside the vegetable market
The chillies come from Andhra Pradesh and Karnataka. These men were waiting with their stock of chillies, looking for buyers.
. 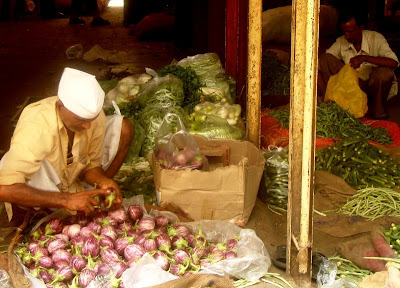 Old man in 'Gandhi-topi' examining brinjals from Bangalore.
I think he was a retail shopkeeper who had come to the market to buy his stock, because behind him were all the other vegetables that he had purchased, tied in plastic bags. 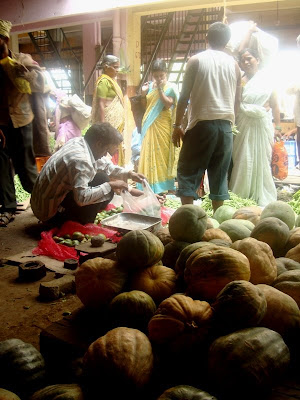 Several women were in the market, haggling over prices.
Some of them looked like local shop-keepers to me, while others looked like they were buying for their own use. 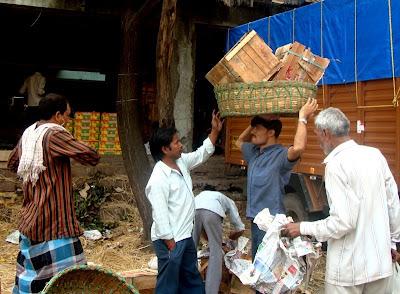 Mango crates amidst hay in the fruit market

This man had purchased two crates of mangoes, and paid someone to carry it to his truck. The 'hamaali' or labour rate per 'peti' (box) is Rs 2.5. 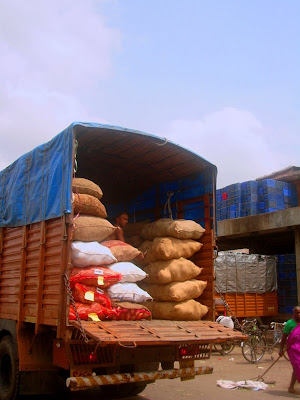 This smaller truck was loaded with gunny sacks of various vegetables, and was leaving the market to go into the city. The 'hamaali' for one gunny sack is Rs 5. 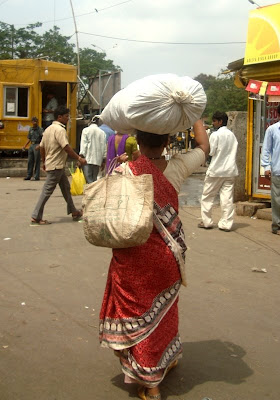 Vegetable seller leaving the market with small amount of stock.
. 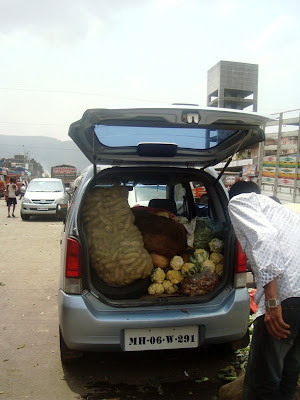 Mid-sized trader leaving with his stock
.
Over 12000 tonnes of agri-commodities arrive daily into this market. The produce is sold by auction and the prices are noted and managed by the Mumbai Agricultural Produce Market Committee. It is the committee's responsibility to ensure that sales do not take place below the minimum price fixed by the government. They are also responsible for ensuring fair measurement and weighing, and fair charges for labour.
.
I wanted to spend more time, talking to people - traders, labourers, shopkeepers, and buyers...I wanted to understand how the pricing system worked. But it was nearing noon and the sun was getting fierce. My driver Mariappan had cleverly retreated to the local canteen (that's him in the white shirt and black trousers, standing in the shade drining chai).
.

So I finally called it a day, and sank gratefully into the coolness of the airconditioned car. As I dropped Satyen back home, I said to him, "I'm coming back again to Vashi! There's so much still to see!"

Want to come with me?

It is Mother's Day today. The morning newspaper is full of pictures of celebrities proclaiming their mothers' role in their lives.

At the Oscar awards this year, A. R. Rahman, while accepting his award, declared that he owed it to his mother and to God. 'My mother is here with me today', he said joyously.

Whenever I hear these kind of things, I remember my mother. Although she is no more, I feel that my mother still lives with me every moment of my life, in my thoughts, words and deeds.
. 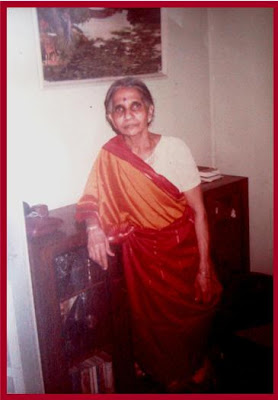 She was a workaholic who spent her entire life in the kitchen ungrudgingly, ever ready to offer a cup of coffee, a crisp dosa, or tasty home-made snacks, to whoever came into the house. But even as she did her chores, she passed on her moral, spiritual and ethical ideas to us children.

Unlike other ladies of her generation, she was neither orthodox nor religious. She never observed any fasts, nor was she a regular visitor to temples. On festival days she would take us to the temple, but for her, the home was her temple. She had a picture of God on a small wooden stand in the kitchen, where she would light a lamp in the evening. She would make us children say "Swamee, Nalla Buddhi Taranamey" (Lord, give us the power to discriminate between right and wrong).

She believed that a righteous life, performing ones duties towards family and society was all that was necessary to please God. She had tremendous control over her desires, whether it was food, sarees, jewellery or other comforts. She ate very simple food, and had a limited wardrobe, and minimal jewellery. She had the habit of saving, out of which she made a gold chain or a pair of bangles for my sister and me.

I have a long list of attributes for my mother - soft-soken, neatly dressed, lending a helping hand to the poor and needy, bravely facing odds...she had a detatched attachment, and an all embracing endearing look. She was not highly educated - her schooling stopped at standard eight, but she was a living example of sterling qualities.

Motherhood as I understood from her, is 'Practise what you preach.' Do what you expect your children to do. When your children watch you day in and day out, your qualities get passed on to them unconsciously.