Last Sunday, I went on a Mumbai Magic tour to Elephanta island. My guest was a South American lady, educated in the US, and a very senior businesswoman.

Waiting for the boat to Elephanta, we saw a very young couple, recently married. The girl could not have been more than 16, the guy perhaps 18 or 20.

"She's very young", said my guest. "Do you think this was an arranged marriage?".

"Probably", I said, giving her my stock answer. "There are no statistics, but I think over 90% of marriages are arranged."

"Does everyone marry this young?"

"Yes, but at the time the British left India, the average age of marriage was 14. We've come quite a way from there, especially if you look at the size of our population, and what it takes to change a whole nation's average in 50 years. It's nothing short of a revolution."

She looked at the young bride again. I could see her thinking, how does this girl feel about this? A stranger in her bed, chosen by her parents? What is this relationship really like?

And, seeing the couple again through my guest's eyes, I thought yes, how does this girl put up with this stranger in her bed?

My guest turned to me.

"Can I ask you something personal?"

I could see it coming.

"Did you have an arranged marriage?" she asked me.

Her relief was palpable.

"I cannot understand this arranged marriage business! How do you put up with it!!", she said.

I could see that for her, being told who to marry was about as medieval as it gets.

I launched into an explanation of expectations and conditioning, and how marriage in India is not between individuals, you marry into a family, so the more similar your backgrounds and religion, the easier it is to fit in. We spoke of East versus West, romantic brainwashing, divorce rates, the caste system, the obsession with fair skin, matrimonials, the shaadi.com revolution, and so on. She was a highly intelligent lady, a pleasure to talk to.

At the end of the conversation, she had heard it all, and it didn't change her mind a bit.

The bottomline is - sometimes East is East and West is West, and there ain't no middle ground!
Posted by Deepa at Thursday, February 22, 2007 No comments: 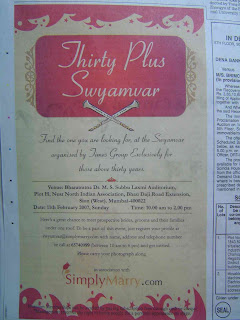 If you've hit thirty, then in the Indian marriage market, you're definitely past your use-by date.

But before you despair - there is hope yet, at least for the readers of the Times of India - simplymarry.com's special marriage fair this Sunday in Sion.

If you're planning to check it out, then, like the ad says - "Please carry your photograph along".

And while you're at it, here is some free advice from the dharmashastras -

Or even better -
"The girl's father should evaluate the boy's family, character, body, age, education, relatives, and wealth and if satisfactory, conduct the marriage. If these seven points are examined properly, there will be no cause for regret later."

And finally -
"Following the code of conduct and practicing celibacy, the bachelor should marry a virgin girl of good quality.

There you go. Easy as pie. What are you waiting for?

God is a woman. Without bawling babies.

Outside the Bhuleshwar Temple, I clicked this photograph of Durga, the great Warrior Goddess. India has so many goddesses - some fierce, some kind, some to be feared, some to be adored.
But strangely enough, for a country that is hung up about fertility, none of the goddesses I see in temples today seem to have borne children. 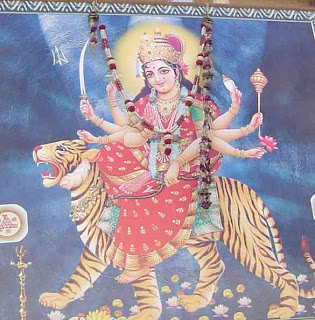 Parvati, the only major goddess with kids, did not carry them in her womb. This, in spite of several chapters in the Shiva Purana detailing her amazing love life with Shiva.

Lakshmi, the Goddess of Wealth, has no kids either. And as for Saraswati, Goddess of Learning, she just sits there on her swan, looking pretty. No sign of ever bearing children, not with that waistline. She's a river goddess originally, dammit. She ought to be more fertile than that!

Excavations in the Indus Valley have revealed several terracotta figurines of a pregnant goddess. And in many places in India, there are carved sculptures of "Lajja Gauri" - a naked Goddess depicted in squatting position. By the fourth century, Lajja Gauri had become accepted into the Hindu pantheon as the consort of Shiva. The Shiva Purana tells the story of Parvati and Shiva in an unending coitus - when they were suddenly interrupted by a visitor, Parvati bashfully covered her face with a lotus. Between the 6th-12th centuries, the worship of Lajja Gauri was pretty popular in the Chalukyan Empire (you’ll see Lajja Gauri statues if you go to Badami). Some of the oldest Lajja Gauri sculptures are from the 1st to the 3rd century, such as this one from Amravati.

But coming back to today – Goddesses these days seem to be sanitized versions of what they once were. Santoshi Maa, for example.

Santoshi Maa is a 1950’s phenomenon, and represents the best modern hope for all-suffering virtuous Hindu wives. Her myths tell the story of a young wife forgotten by her husband and abused by her in-laws. The pious wife, however, remains loving and faithful. Chiefly by means of prayer to Santoshi Maa and fasting once a week, she sees the return of her husband. He has newly acquired wealth, and she moves with him into her own house (thereby earning freedom from her in-laws, I presume). And – nine months later, she has a son.

But does Santoshi Maa - the Goddess of Contentment have a baby herself?

God is a Woman. Without bawling babies.
Posted by Deepa at Tuesday, February 06, 2007 4 comments:

A lesson in Mutton Korma

On a recent bazaar walk near Chor Bazaar (Thieves Market), I spotted a group of men making mutton kurma for a feast in the evening. I stopped for five minutes to chat and photograph. I've promised to bring back colour photos the next time I go there.
So here's what I saw:

Step 1: Saute onions with garam masala, until the onions turn red. Lots and lots of onions, enough to thickly layer the bottom of this vessel. Lots of oil too. When the onions are ready, add the mutton. 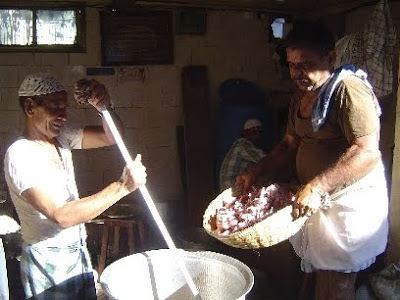 The guy holding the mutton basket is the Master Chef. He was a man of few words, but clearly the boss. Actually, it was pretty cool to see. His vocabulary was a whole bunch of terse sentences, each with not more than 2 words. If he said something, the others would hop to it, pronto. They were pretty smooth as a team.

Step 2: Stir the mutton and onions together for about 5 minutes. Requires muscles. 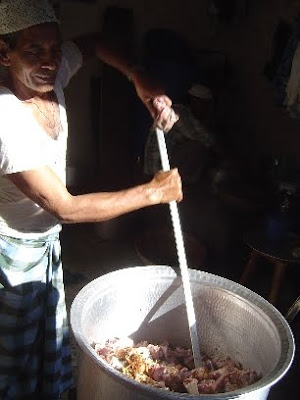 Step 3: Ginger, garlic and green chillies - ground into a paste. Exercise discretion. This plate was heaped full, before most of it was added to the waiting mutton. 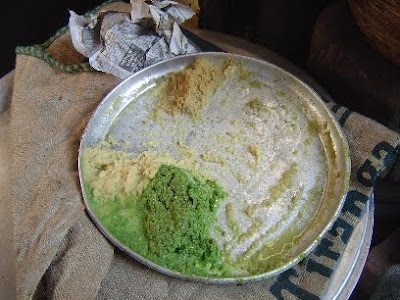 Step 4: Turmeric - lots of it. He actually just picked up a handful and flung it carelessly into the pot. 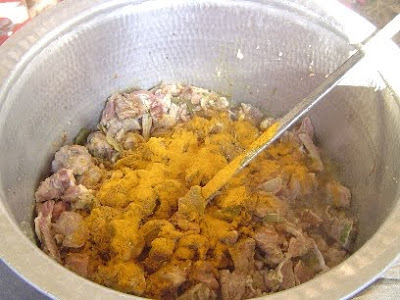 Step 5: Add a pan full of tomatoes. Clearly not a major ingredient, but a critical one. 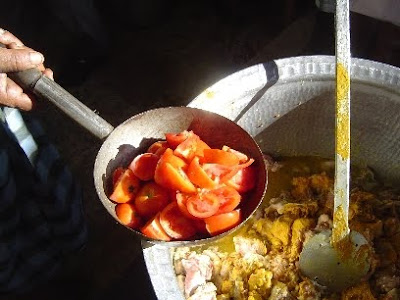 Step 6: A litre of water, and a full handful of salt - looks delicious already. 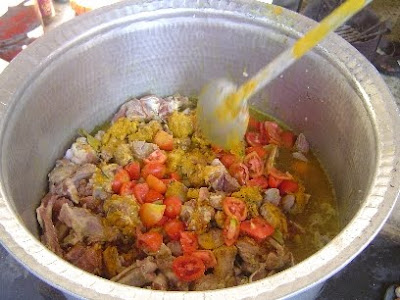 Step 7: Now the magic trick - layer with more onions. This is about half way through the process of layering. By the time the layering was done, all the mutton was covered. 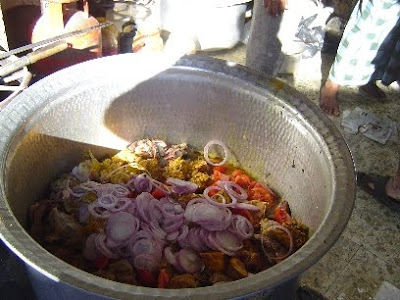 Step 8: Close and cook until the mutton is tender. 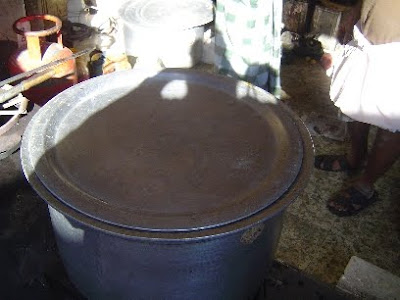 Step 9: Here's the team that orchestrated the whole thing. Master Chef with Assistants. 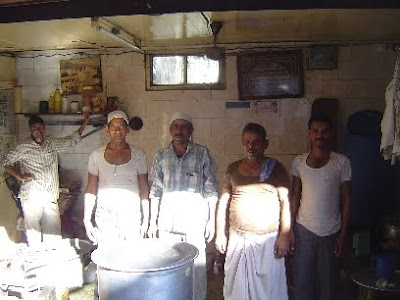