Visiting Belapur's Palm Beach Road (and checking out the mangroves)

A couple of weeks ago, I went with my sister Roopa to the inauguration of her friend's furniture showroom in Belapur.

After many years doing large corporate contracts and custom work, Roopa's friend Subhangi had finally set up a retail store in CBD Belapur.
A retail store - especially with a branded line of home furniture - was a dream come true for Subhangi, and we wanted to congratulate her. In our little Brahmin community, very few people turn entrepreneurs. And as for women entrepreneurs, honestly, I can't even count a handful.

I was pretty pleased to see what a good job Subhangi had done, and how nice the shop looked. Subhangi calls her product line Furnicheer. My sis and I agreed that it was indeed very cheerful, just the sort of thing you need to brighten up a rainy day.
I had not been to Belapur for over 10 years. So it was a complete surprise to see how much the area has changed, especially the upscale Palm Beach Road. Everywhere I looked, there were lots of branded outlets.
Here is another photo from a little further down the road:
In case you are wondering where this Palm Beach Road is, check out this map (click on it to see a larger version). The pink shaded area is CBD Belapur, in Navi Mumbai. Palm Beach is a stretch of road about 10 kilometers long, running parallel to the coast, which takes you to CBD Belapur. To the left of Palm Beach Road is a green belt, this is the coastal mangrove stretch which is critical to Navi Mumbai.
Here's what the road looks like - it has 6 lanes (3 on each side of the road) and no potholes. The western side of the road is parallel to the sea. The eastern side is where most of the buildings are located (many of them offer views of the sea from higher floors).

This is what the green belt on the western side looks like:
The Soonabai Godrej Marine Ecology Centre has published a map of Navi Mumbai's mangroves. You can clearly see the green stretch covering Thane Creek.
The Ministry of Enviroment and Forests has defined Coastal Regulation Zone (CRZ) rules to prevent the destruction of mangroves. However, there are several instances of dumping and encroachment along Palm Beach Road, and there was a news item last month that more than 500 buildings (!!) along Palm Beach Road have not acquired the necessary CRZ clearances. Obviously, the management of this mangrove cover is far from ideal.
Travelling along the Palm Beach Road, seeing the large scale buildings, malls and shops made me realize the contrast between the natural cover of the land, and the man-made developments that are changing it. The change has both good and bad aspects to it. While we want better roads, better homes, better shops and better infrastructure; we also want these wetlands to remain with us.
Often people think that the "Save the Mangroves" issue is a conflict between the "greens" versus practical people who want development. But mangroves are not just about birds or pretty scenery - they are a practical necessity, to safeguard Mumbai from land erosion and flooding; to keep the value of our real estate intact. They work as the city's kidneys and lungs, they flush out toxins. The conflict therefore, is really between the immediate/short-term gains of destroying the mangroves for lucrative development projects, versus the long term gains of protecting them.

My position is clear - I want the shops and the homes and the big smooth roads, most definitely. But I really believe this can be done without flouting all kinds of norms. We just need the mindset to look for the right solutions (and more important, the willingness to pay the real cost for these amenities). I am very pleased that there is now media reporting and awareness of these 500+ buildings which have broken the rules. If we have a few high profile cases like this (and the earlier Adarsh scam), I think it will eventually push builders towards a more law-abiding mindset.
Posted by Deepa at Sunday, July 21, 2013 8 comments:

I walked through Oval Maidan yesterday, and found the palm trees nodding their heads happily in the rains.

The Rajabai clock tower looked stunning, rising from a canopy of green (click on the photo to see it in large size, it is really gorgeous). 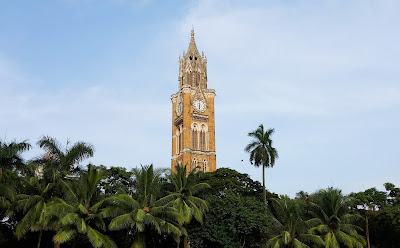 I walked up for a closer look. The tower is part of the Bombay University library, built by the famous Jain philanthropist and businessman, Premchand Roychand. He named the tower after his mother, Rajabai. 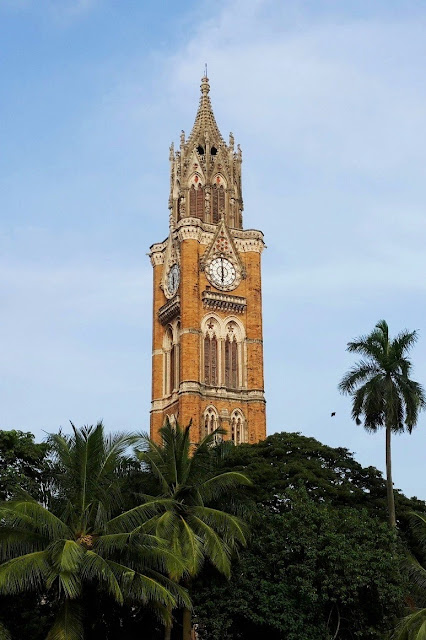 It was 6 pm in the evening, and the clock chimes announced the hour. The sound brought a smile to my face as I remembered the story behind the clock. Apparently Madame Rajabai, like all orthodox Jains, would eat her last meal of the day before sunset. Due to failing eyesight, she could not tell the time, so Premchand built her a clock tower, whose chimes could be heard from their house. What a nice story :)

To the left of the tower, I could see the High Court building, squat and solid, exuding an image of reliability. The Oval Maidan looked greener than I have ever seen it. This is really such a beautiful part of the city! 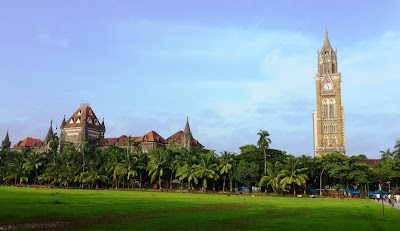 As you can see from the photo above, I found a nice angle to photograph both monuments together, cleverly avoiding the modern Bombay Stock Exchange building (which otherwise ruins the skyline). If you look carefully, you can see part of the Stock Exchange hidden behind the Rajabai clock tower :D :D

And here's another angle, this time without the clever fiddling. You can see the Stock Exchange building right in the middle: a 1970's structure completely at odds with the other two. Sigh. That was before they had heritage zoning laws. 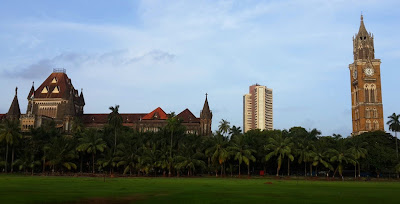 The High Court and the University Clock Tower are from the second half of the 1800's, when the major building material was stone. Reinforced concrete only started being used in Mumbai's buildings in the 1900's (although it was first used in Paris in 1853).

After the plague outbreak at the end of the 1800's, Mumbai began spreading northwards. The availability of concrete was a critical aspect of this northward growth. I've been walking around photographing some great Art Deco buildings in the city...mostly built from the 1940's onwards. I'll post them here sometime soon.
Posted by Deepa at Monday, July 15, 2013 2 comments:


I clicked this photo on one of the main thoroughfares in Dharavi, where many people were wolfing down this snack happily.
It comes in two forms: aamlet-pav (green chillies and onions flavoured omlette, stuffed in a bun) or a tava-fried hard-boiled egg stuffed inside a bun.

The aamlet-pav is only 5 rupees, making for a great breakfast or evening snack. The hard-boiled egg with pav is 10 rupees. There is a green chutney which goes with it, it is applied inside the pav before placing the egg.

The pav (bun) is freshly baked in the many local bakeries in the area.

In which I learn about farming in Marathwada


I was in the Marathwada region a couple of weeks ago, on a trip to the Ajanta Caves. As you probably know, this area of Maharashtra has been suffering from drought for the last 2 years. So I was really delighted to see that it had been raining! Everywhere we could see farmers ploughing the moist soil with bullocks.
The soil was a kind of clayey black (although it looks brownish when freshly tilled). It is very fertile black soil, said to be perfect for cotton.

Most of the farms we saw were small and seemed to be self-cultivated. I was curious about it, so I looked up the Aurangabad Gazette, and found that more than 75% of the farmers cultivate their own land, with the help of family, or by hiring someone to work alongside them. The farmer we saw was working with one helper.
The farmer's little daughter was playing in the field, running around, and poking the soil. She seemed very absorbed in her game, I wonder what she found :)

The plough the farmer was using was the standard one-point model, the kind that leaves a single deep furrow. The farmer can carry this kind of plough on his shoulder to work every morning and take it back at night. We did not see a single tractor anywhere, although we drove around for about 2 hours. Maybe it was too early in the planting season for tractors.
Currently, the kharif crop is being planted. These crops start coming to the market in autumn (harvest goes on from Sep to Dec). In case you didn't know, the word kharif means autumn in Urdu.

The kharif food crops in this region are wheat, jowar (sorghum/white millet), bajra (pearl millet), maize, green gram, black gram, pigeon peas, and soybean. Jowar and bajra are important food crops, and they are used not only by the farmer's family, but also for providing fodder to livestock. The most important cash crops  (grown only for sale, not for own consumption) in this area are cotton and sugarcane.

Cotton is primarily sown in the rainy season, and harvested in Sep-Oct. 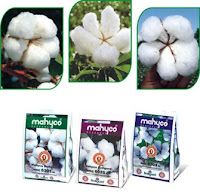 In 2006, many farmers in this area began experimenting with Monsanto's BT Cotton, hoping this would increase yields, but this experiment failed for several reasons: high price of the seeds, poor understanding of the crop's requirements (it is unsuitable for areas with poor rainfall or poor irrigation facilities), high price of pesticides and to top it all, drought. The last two years have been terrible. Farmers who planted multiple types of crops, especially grains and pulses with shorter harvesting cycles, have fared better than those who relied only on cotton.

The government is now looking at a desi solution to the problem, using non-BT seed varieties suggested by Centre for Indian Cotton Research (CICR). Will it work? Trials only started in last year's kharif season, and it is too soon to tell.
Apart from cotton, the other big crop in this area (and indeed, all of Maharashtra) is sugarcane. There are multiple seasons for planting sugarcane - adsali is planted in the rains, pre-seasonal sugarcane is planted in Oct-Nov, and the suru crop is planted in Jan-Feb. In addition, there is also a ratoon crop, where the farmers use the stubble from the previous crop to grow the next crop.

Sugarcane is entirely the wrong crop for Marathwada, given the high amount of water it needs. But farmers are attracted to sugarcane because it fetches more money compared to other crops that they can grow on the same field. Also, the presence of a political sugar lobby ensures that it is easier to demand a better Minimum Support Price for sugarcane.
The Marathwada area is also well known for its citrus fruit crop. The farm that we saw had rows of trees, I presume at least some of them were "mosambi" that the region is famous for.
I hope this is rainy season turns out to be good for Marathwada. Please join me in wishing these farmers a great harvest and joyful days ahead. May they leave these terrible years behind them,
Posted by Deepa at Sunday, July 07, 2013 1 comment: