I lead a double life

MINT, the Wall Street Journal's partner newspaper in India, interviewed me recently. The story appeared today. It's called "I lead a double life", and it is about five people, each of them juggling an offbeat passion with a regular career. I was one of the five. They figured I was a good subject, since I have a mainstream consulting career as well multiple tourism businesses.
.
This is the photo that appeared with the article. For once, I look like a "successful banking technology consultant". And what's more, I look suitably entrepreneurial, don't I? The kids running next to me are guides on the 'Mumbai Local' tour.
. 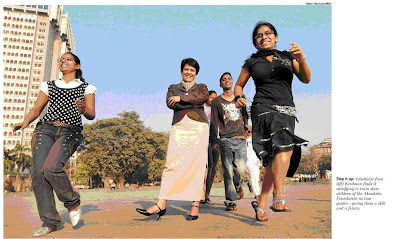 This is what the article said about me:
.
From 9 to 5, Deepa Krishnan, an IIM Calcutta graduate, is at her day job, as a successful banking technology consultant. But after work, she lets her passion for history and architecture take over. “I found most tourists in cities were given cookie-cutter tours. They were actually clichéd and unimaginative impressions. I thought I could be more specific with my city tours through proper story-telling, and create a cultural mosaic that people can identify with,” says the 39-year-old Mumbaikar. Krishnan organizes city walks in Delhi, Mumbai and Chennai through her three websites: www.mumbaimagic.com, http://www.delhimagic.com/, and http://www.filtercoffeetours.com/.
But for Krishnan, the toughest part about being in a job and indulging her passion was learning to negotiate the grey zone between family, work and passion. “When my daughter was little, I had to set my ambitions aside. I had to choose not to do this as my family may have suffered, but now that my daughter is 14, I can juggle both. In fact, my daughter and mother also write for my blog,” says Krishnan, who sometimes works 12-14 hours a day to stay on top of things.
.
Just for the record, when my daughter was little, I had absolutely no ambition for a second career, or for anything offbeat. I hadn't even heard of responsible tourism. So the "I had to set my ambitions aside" is poppycock. What I said to the writer was that its easier to find time for multiple careers when you don't have a young child; and that I wouldn't have done it when my daughter was younger.
Posted by Deepa at Saturday, June 28, 2008 3 comments: 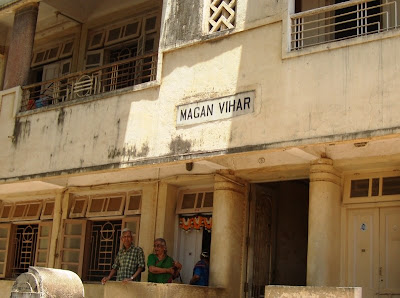 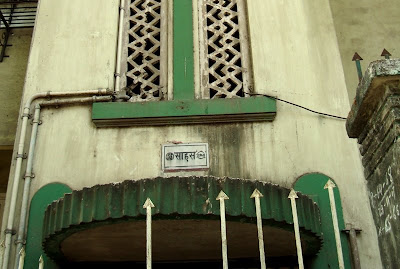 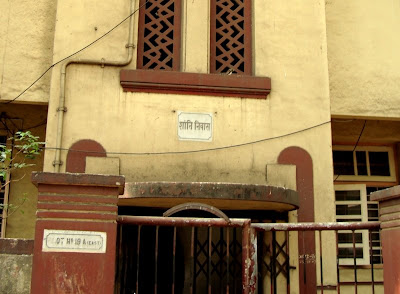 I finished my meeting in Nariman Point by 12:30. I was starving, but the next meeting was in Worli at 1:00. There was no time for a sit-down lunch, and I really didn't feel like eating the usual vada-pav or bhelpuri.

"Let's stop for a minute at Babulnath", I told the driver. I had Dave Farsan Mart in mind. 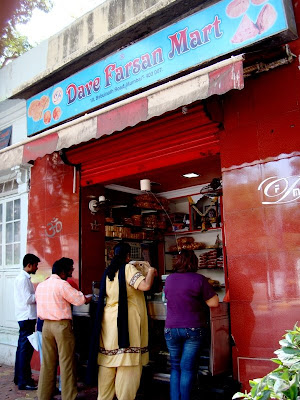 Dave is pronounced Duh-whey, in case you didn't know. Farsan is the Gujarati word for tea-time snacks. Dave Farsan Mart is a little hole in the wall outfit, but God, their farsans are delicious. As usual, there were people at the counter, buying stuff by the kilo.
.
I bought myself a plate of sabudana vada. Well, I say plate, but really, it was a cup. With two piping hot vadas, and a pale green chutney. By the time I got to my next meeting, I was smiling a happy smile. 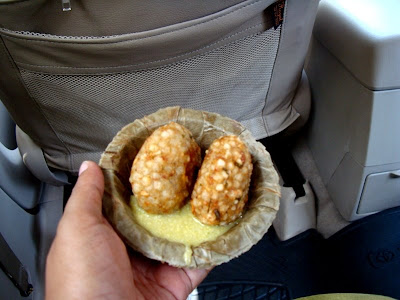 These days, I've been having a rather passionate affair with sabudana. My maid makes brilliant sabudana khichdi for breakfast. I'll post photos here, soon as I find them. They're here somewhere on my PC.

This morning NDTV 24 x 7 covered Mumbai Local, a new tour that I launched this season.

It is a tour with a difference - because it takes tourists out of the comfort zone of private cars and airconditioned buses. On the Mumbai Local tour, tourists get an inside view of Mumbai by going on our iconic red BEST buses, black-and-yellow taxis, and of course, our famous local trains. The tour starts at the Gateway of India, and covers all the "must-see" places in the city - but in a way that's guaranteed to show you the "real" Mumbai! To round it off, it includes tea and snacks at Swati Snacks, where tourists get an introduction to Mumbai's special brand of fast food.

The guides for this tour are special too. They are a group of teenagers, from Akanksha Foundation, who we trained for 3 months to do this tour. Akanksha helps children from disadvantaged families, several of them from small chawls and slums. I've been supporting Akanksha through donations, but I figured asking Akanksha kids to become guides on this tour would be a better than just offering financial help. Here's a tour in progress: 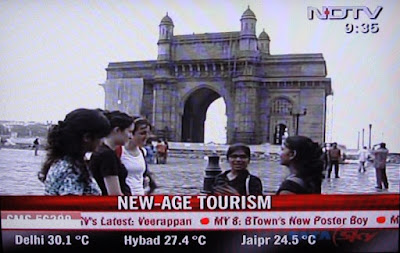 The two girls on the right are guides. They both come from poor families, but have completed school, and are now in college. I want these teenagers to show visitors the city as they see it everyday – home to both the rich and the poor, alive and vibrant, and constantly on the move. I'm hoping that seeing the city through the eyes of these young guides will give tourists an insight into the true spirit of Mumbai.

For the guides too, the tours are an opportunity to meet people from different parts of the world, to learn new things, and to see the world a little differently. There are five guides - four girls and one boy - the tours give them an opportunity not just to earn pocket money or supplement their family income, but also to learn how to handle a wide range of situations. They are growing increasingly confident with each tour, so I am personally very happy.

NDTV interviewed me as well, and I spouted some nonsense about the tour - I didn't fumble, thank God. They told me later I was "a natural". I should've dressed for the interview, of course, instead of showing up in my oldest T-shirt and cargo pants. I thought I'd play it cool, you see? So there I was, on national TV, faded Tshirt, streaked kajal and limp hair, and looking like a small sized blimp. Sigh. So much for playing it cool. I don't dare post a photo, but the video is here on the NDTV site. 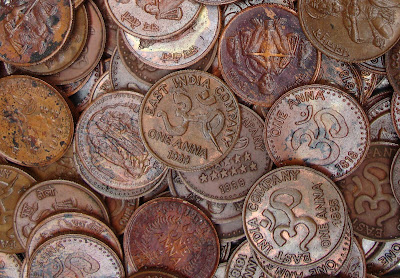 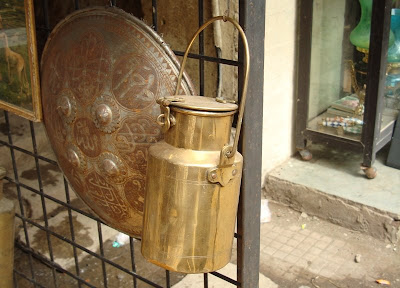 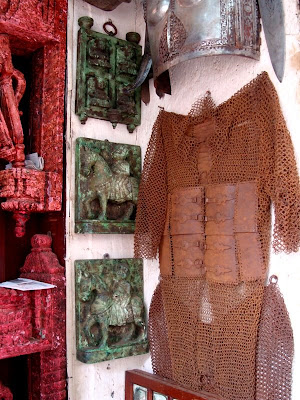 Yep. It's raining in Mumbai!

This photo is for my cousin Anjali, who lives in Ohio now. She gets nostalgic about Mumbai sometimes, and makes intermittent attempts to come back.
.
The floods are crazy these days, Anju. All it takes is a little rain for the flooding to begin.
. 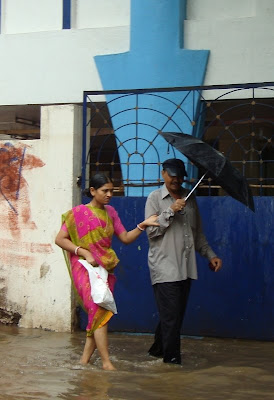 Do you remember when school closed because of floods? Did you go ever go walking from school to home in a flood? I did once, and the highlight was that I found a dead cockroach floating in the water under King's Circle bridge, and totally freaked.
.
During yesterday's rains, I saw this woman walking - she had such a look of disgust on her face that it brought back those cockroach memories! As a matter of fact, I can still see the floating wings in my mind and that bloated brown body...aaaaaaaargh I'm freaking out again already!
.
Anju's parents are on their way to India this month, after several months in the US. So this second photo is for them.
. 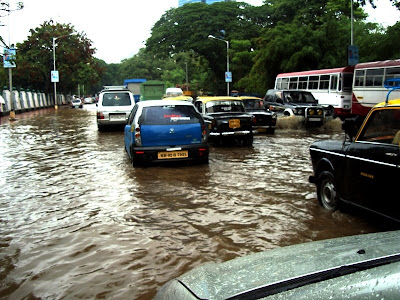 Welcome back to Mumbai! The Rain Gods are waiting for you!
Posted by Deepa at Sunday, June 08, 2008 6 comments: