I watched as the old man shaped the clay carefully. A dull brown pot emerged from the muddy lump, growing, taking form. 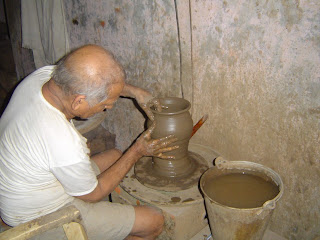 I had a brief wild temptation - I wanted to poke a finger in it, and watch the mud groove around my finger. I damped down the thought. 'Act your age, woman', I told myself, and focused instead, on the mesmerising wheel. In one smooth gesture, he scooped the pot away from the wheel, and gave me a smile. I was filled with sudden warmth for this frail yet strong old man.

I was in Kumbharwada, Dharavi, home to potters from Saurashtra. With me was Shelley Seale, a writer from Texas, working on a book about underprivileged children. As part of Shelley's research, I took her on a tour of Dharavi.

The homes of Dharavi's potters are a world in themselves. There is a simple logic in the layout - at the front of the house, on the roadside, the pots are sold. If you enter the front door, you see the potter's home - there is a tiny living area with a television, and a kitchen neatly stacked with steel plates and tumblers. Pass through the kitchen, and you're in a little workshop, where pots are fashioned. Beyond this workshop is a common open area, where you can see the kilns where the pots are baked.
It is a cottage industry. Men, women, children - everyone does a part of the work. Water has to be fetched and carried, the clay mixed to form the right consistency, and finished pots and pans loaded into trucks. In the midst of the bustle, food is cooked, spicy Saurashtra cuisine. Tea is made. Children are bathed and fed and sent off to school.
At the end of the tour, Shelley wrote an article for worldpress.org, about her Dharavi visit. She said -
To me, this place dispels the myth that poverty is due to laziness — that the poor somehow deserve their lot in life because they are lazy or stupid or otherwise lacking in some important character trait that the successful possess. Dharavi is a resounding rebuttal to that belief.

I couldn't have said it better. 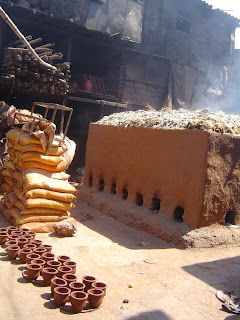 Behind the potter's workshop, gunny bags with clay. 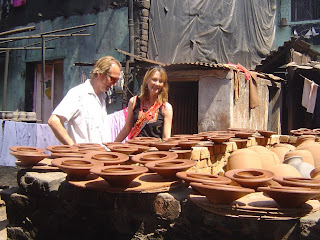 Pots and shallow pans, drying in the sun 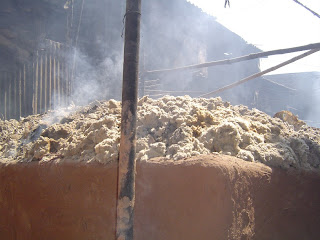 The kilns are fired using waste material. The pollution and heat is incredible. 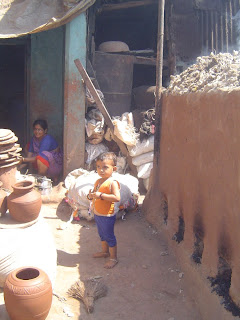 Doing the dishes and keeping an eye on the kid.
Posted by Deepa at Thursday, August 02, 2007

That's an amazing post on Kumbharwada in Dharavi. I love the pics and the description of the place.
Very few people look at the poor in Mumbai from Shelley's point of view. That's a great comment.

I read Shelley's article on Worldpress just now, and she has brought out the essence of mumbai so beautifully.
Love your posts. Great job.

Lessons from Dharavi led me to two more interesting articles by Shelly Seale.
Great blog - love it! Would love something about Indian literature....just finished Sacred Games, miss it already!Regards, Anne-Trine from Norway

Thank you for a beautifully written, insightful piece on Kumbhawada in Dharavi.

I've been to Mumbai once, and am planning on going back soon. I am planning a 4 month hike from Mexico to Canada to raise awareness and funds to help free women and children trapped in the Red Light District of Mumbai. When I come back, I would very much like to visit you as well.

Blessings, and peace to all three of you amazing women!