The government's handling of the pandemic has become a heated political debate. Today in three of my WhatsApp groups, I watched people leaving the group on account of differences in view points. A couple of them left without any explanation. A couple of them wrote a few lines and left without reading responses. I am sure all of you are familiar with such abrupt exits.

I used to be one of those abrupt exiters. Some years ago, you remember that time when all of us were having Modi-Wars and Trump-Wars and so on? In one such debate, I stormed out of a WhatsApp group, where there was a guy making me see red. At the time when I left, a couple of friends in the group reasoned with me, saying that I should learn to be more tolerant. I answered angrily that values mattered, and that such tolerance was in fact, cowardice. But eventually I went back to the group. And I learnt to tolerate the people who made me angry. 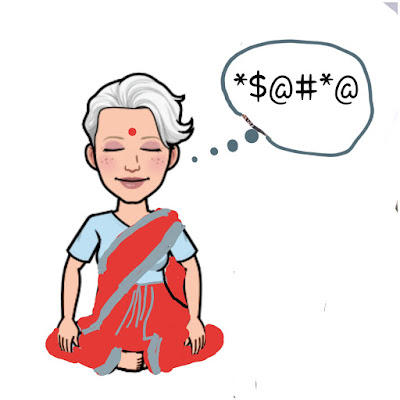 It's not easy, the process of learning to tolerate someone who is the opposite of you, and whose very presence is constantly pushing your buttons. I really struggled a lot. I still struggle, but it is getting easier. What made it possible was my realisation that the group was a community in which I lived (albeit virtually). Communities are made up of all kinds of people, just like the real world around me. I deal with a lot of diverse people in the real world, without getting into fights. Then surely I could do the same in the virtual world? As soon as I realised this, my online life changed and I stopped heated verbal duels. Instead I started modelling my online behaviour in line with my real world behaviour. It's nowhere near perfect, because hey, my real world behaviour also is very immature and impetuous. I still cuss and swear, but everything is much more calm than it used to be.

As I get older, I am trying to accept that people have different kinds of viewpoints, different levels of awareness, and different levels of sensitivity to certain values that I take for granted. What we think, is largely a matter of our upbringing, and the company we keep. If someone has been blessed with parents or teachers who made them think a certain way, or has developed a reading habit that made them more aware, they'll be a different type of person. Sometimes it's crisis that changes us. A friend of mine changed completely after her husband's affair. Another changed completely after his daughter went through a medical crisis; and started frequenting temples. It's really a complex cocktail. That's why political and relgious debates have no easy resolutions. Each person has to navigate their way through it.

Then what to do? Nowadays when I meet people who don't think the way I do, I engage upto a point, and then try to politely leave them to their doings. Instead of trying to convince them, I focus on my own work. I tell myself that I am responsible for my own path and my own growth as a human being. Others can find their own paths.

Doing my work gives me meaning and direction. That is enough. I really feel no need to evangelise these days. I feel no need to get angry. There is no benefit in anger except to make oneself sick, anyway. Often my blood boils and I want to kill someone, but I have learnt to leave the arena when it gets unpleasant or acrimonious. I, who used to be the original debating champion, am learning to let go. Is it cowardly? Yes. But it is also very liberating.