I'll tell you an interesting story.

It's a little long, but bear with me. If you want to know how epidemics actually play out in India, and how people react to it, you should listen to this story of the bubonic plague that hit Mumbai in 1896. 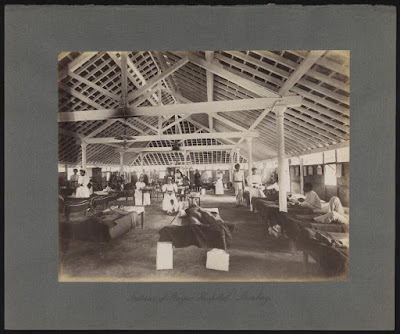 It has lots of similarities with how things are playing out with Covid. Lots of learnings, particularly in how people and governments behave in times of stress. And how epidemics behave in general.

In 1896, a strain of bubonic plague of Chinese origin, came to Mumbai. First it reached Hong Kong, and then came via ship from Hong Kong to Mumbai, carried by the rats in ships. As the plague spread among the rats, the rats died in large numbers. It turns out that the rats were carrying infected fleas on their bodies. When the rats died, the fleas on the rats jumped on to the nearby humans, looking for an alternative host. When the flea bit the human host, the human got the infection.

The plague hit Mumbai hard. The ground zero was a chawl in Mandvi (Masjid Bunder area) where Bania and Jain merchants had their warehouses on the ground floor, and workers lived in crowded conditions in the floors above, with common washrooms. When the plague was discovered, the grain merchants refused to kill rats citing religious reasons. In fact, they wouldn't let the British appointed rat catchers into the grain godowns. That ground zero area, as described in British record had leaking water, it was permanently dark and damp, with rotting grains and dead rats. And lots of people.

Naturally, more people started getting infected and dying in droves in south Mumbai. The main brunt was borne by the mill workers, mainly Hindu migrants from other parts of India.

The British were familiar with the plague, having seen The Black Death epidemic earlier. They cracked down fast on further spread by quarantining, strict isolation, disinfecting and washing streets, and insisting those who were infected get treatment (they put restrictions on what they felt were quack local medicinal practices). Fairs and pilgrimages were cancelled. House to house searches were made, and people forcibly evacuated and moved to camps. They had strict inspection in train compartments, with examination of both men and women to see if they were infected. Infected belongings were burnt to limit the epidemic. A huge outrage ensued among Hindus at these protective measures.

All containment measures were of no use. The British could not do anything about the panicked local junta, who fled the city. Some climbed up Malabar hill where they thought the plague could not reach them. Some fled across the Mahim Creek to Bandra, seeking protection there. Many crosses were built in Bandra at this time, some specifically to St Roch who is the patron saint of the plague.

As the deaths continued, more people fled into the interiors, taking the infections still further with them. Within the first 4 years of its arrival, the plague had killed 8 million people, say some accounts. Others say it was 6 million over a decade. Either way, it was a very high number. The deaths peaked in 1907, although the plague started in 1896. The deaths were mainly in Western India, but also in Punjab and MP, where people had gone carrying the infection. Rich or poor, it spared no one. The mortality rate, by the way, was less than 2%. Malaria and TB killed twice as many people in the same time. Similarly cholera and smallpox caused far more deaths. But it was only the plague which caused crazy panic.

Once people started fleeing everywhere, the British realised the futlility of their containment efforts. They switched to vaccination as a method to treat it; which by then had been developed at Parel by a clever guy named Dr. Haffkine. The bharatwasi public had no understanding of vaccination. Conspiracy theories sprang up, that the British were "giving injections to poison us". Quarantine and forceful evictions from houses continued, in the interests of public health. People beat up health workers. Tilak wrote long reams of protest in Kesari about how brutal the plague handling was. One British guy called Rand was appointed in Pune as Plague Commissioner. The Chapekar Brothers shot and killed Rand and his assistant as "revenge" for the insult to the "honour" of the city's women. This scared the British into thinking whether another Mutiny was now on the cards. So they backed off a bit, and authorised native vaids to implement the vaccine, hoping for more acceptance.

Did the vaccinations mean the plague ended soon? Hell no. The bubonic plague continued to kill people for 30 years. But the numbers were only high in the initial outbreak locations for the first 3-4 years. After that, people got smarter in keeping track of dead rats and outbreaks. Haffkine institute continued to do testing and control. There was no crazy panic. Vaccinations grew. They finally recorded 12.7 million deaths from 1896 to 1957. This strain of the bubonic plague was active till 1960. In that year, the worldwide casualty had dropped to about 200 people, and WHO classified the pandemic as over. So that's what it took. 60 years, for the plague to go away.

But we are not in an exactly similar situation now. Our medicine has advanced a lot. We have also taken containment steps. Long distance transport has been locked down. People believe in teeka (vaccination) and we have implemented many large scale such vaccinations so we know how to go about it. Our count of hospitals and facilities is much better than at that time. I do not believe the current epidemic will play out like the 1896 plague. I think soon the cure will be in place and available. Meanwhile please support government efforts at quarantine and keep social distance. Stay at home. Wear masks. Don't spread it to your friends and those around you.

Thankyou this is very interesting . Mem in Melbourne

Thank you for the story - let's hope it doesn't take 60 years for this virus to go away! Hope all is well with you and yours in India!

My question is, why do all plagues originate from China? And why we don't do anything about it?