An evening on Marine Drive

My friend Praveena just landed a new job, so we went out to celebrate. She bought tickets to a play, it was being staged at the National Centre for Performing Arts on Marine Drive, at 4 p.m.
.
'Chaos Theory' by Rahul da Cunha is the story of two people, starting from their college years in the sixties, to their present day life as academicians in New York. Reasonably good ingredients for a play, I guess, although this kind of storyline has been done to death already.
. 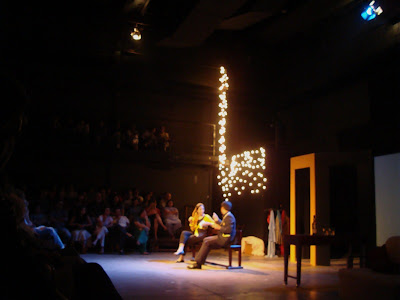 Here's a scene from the early part of the play. The two first meet at a college party in St. Stephen's, Delhi, where they discover they are both students of English literature. He is a pompous but funny wastrel who loves to drink; she is sharp and witty and destined to be top of her class. 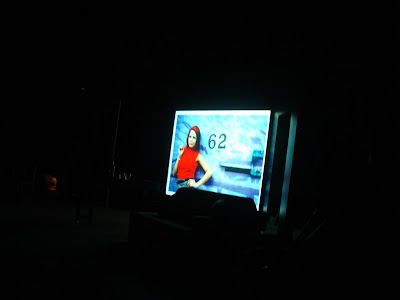 There was a projection screen at the back, on which they used a montage of music and visuals from each decade to show the progression of time. The images and songs were right for the period, but it looked like the sort of thing an amateur would put together on Powerpoint. A little more attention to style and design would have helped. I felt like I was back in college, putting on a last-minute show for some college festival.

The play itself was pretty decent, some of the lines were really funny, although the conversations sounded like they were set in Eton rather than Delhi. I must confess, I'm not a big fan of the kind of Indian theatre where the script sounds like an Englishman wrote it. Granted, the main characters were students of literature, but they sounded so very unreal. There was also a lot of slap-stick by supporting characters, and a final emotional scene with so much gawky hamming by the drunk wastrel that both my husband and I couldn't bear to watch it. Overall, though, not a bad effort, 6 out of 10 on the Deepa Scale!

The play finished at 5:30, so we decided to wander down past Marine Drive to Chowpatty Beach. Everyone wanted to eat pav-bhaji. 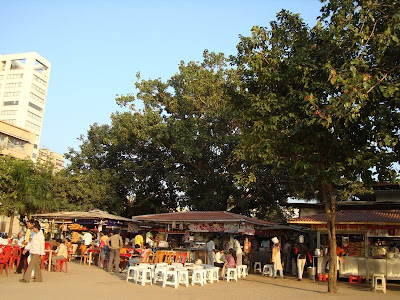 At Chowpatty, the stalls were already beginning to see the first customers of the evening (peak time at the stalls is from 6:00 to 8:00 pm). We went looking for pav-bhaji, but got sidetracked by the Badshah panipuri stall. 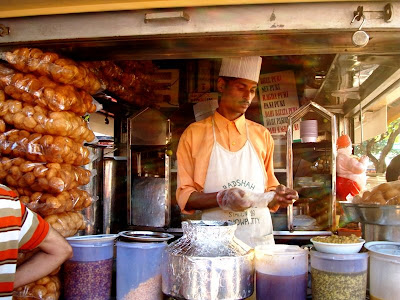 Badshah has absolutely delightful panipuris. They're served by a guy wearing a pair of gloves, so of course, they lack that extra tang of sweaty hands! But it's lip-smackingly good, and you can ask for a filling of your choice (potatoes, sprouted moong, chole, or boondi). I had hot chole filling, with ice cold pani and an absolutely heavenly meetha chutney. After you're done eating, there's a guy who comes around handing out paper napkins. 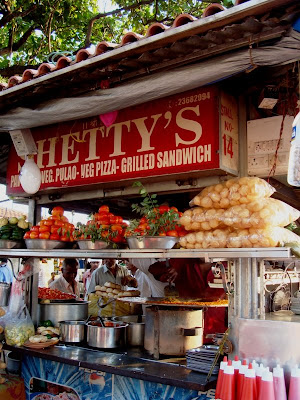 After panipuri, I dragged everyone to my favourite pav-bhaji stand - Shetty's. They also do some really good sandwiches. 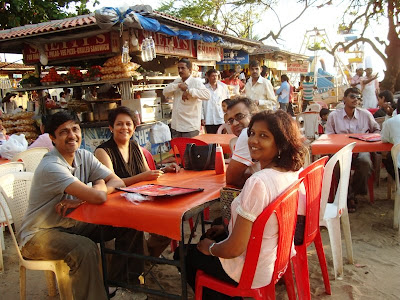 Pramod, me, Praveena and her husband Rajeev. Four very hungry people. I ordered a cheese pav-bhaji, while they stuck to the normal stuff. Pramod as usual, wanted his pav without maska. 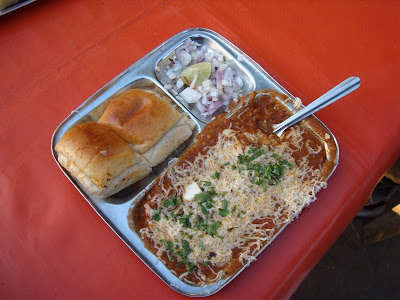 Piping hot and mouth-wateringly tasty! It was spicy as well, the kind of spice that sets you thinking about ice-creams and golas for the next course. 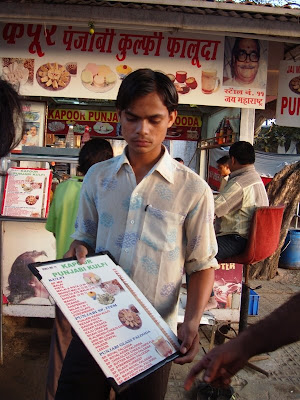 Kulfi seemed like a better option than golas. There were lots of flavours to choose from; including some names that seemed inspired by Playboy. (I'm not kidding. I found a Kulfi called SANGAM 3-IN-1, and another one called MILAN 4-IN-1.) There was also a whole sub-section called Punjabi Special Item (are you thinking what I'm thinking?) - which included Punjabi Rabdi Kulfi, Kaju Draaksh Kulfi, Anjeer Kulfi, Sitaphal Kulfi, and a very, very modern-sounding 2000 MILLINIUM KULFI. Pramod ordered a Punjabi Rabdi, and it was outstanding. Praveena and Rajeev had Sitaphal. 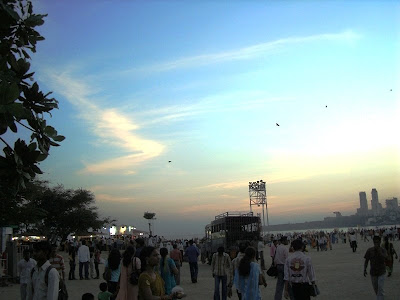 By this time, the sun was setting over the Arabian Sea. The municipal van came around on its patrol, so the hawkers selling colourful paper fans and balloons disappeared. We decided to head out to Dragonfly at Express Towers for a drink. It's quite a swish lounge bar and restaurant, and some of the tables have really lovely views of the Arabian Sea. 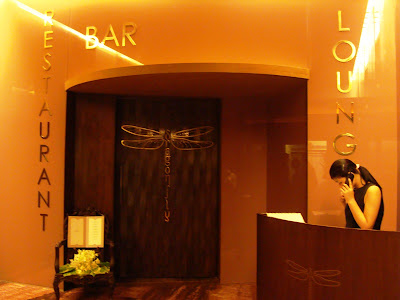 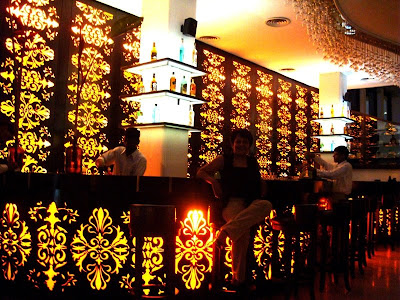 We hung around near the bar. Drinks were ordered, and pronounced satisfactory. After all the stuff we'd eaten, none of us could bear the idea of more food. It was a quiet night, since we were there early, so we had our pick of tables.

I didn't want to sit anywhere near the big TV screen, so every now and then Rajeev would pop around the corner to watch the Singapore Grand Prix. We were discussing Lehman Brothers and bonuses - or the lack of them - when Rajeev suddenly piped up: "That's the Spanish national anthem!"

"Ah", I said, nodding like it all made sense.

At some point, we finally paid our tab (well, Praveena paid!) and left. Downstairs, the Victorias were doing their little pleasure rides on Marine Drive. I watched a young couple (honeymooners?) smiling and enjoying their ride on a jingling carriage. 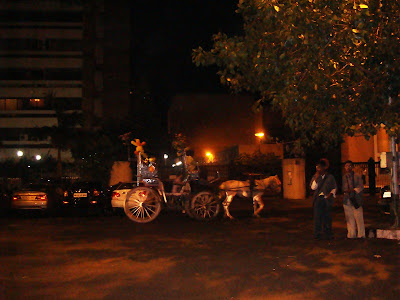 By the time we got into our car, I had a beatific smile on my face. Good company, great food, good conversation...and great views of the Arabian Sea. I can't think of a better way to spend an evening on Marine Drive!

What a nice Mumbai day. Only a long island ice tea at Dome with a birds eye view of the Taxi's driving with headlights turned off could have made it more complete.

Dragonfly -thumbs up, what a great venue - might I recommend the cosmopolitans.

After reading your entry we are planning our trip to Shetty's at Chowpatty. But not before I take some visiting friens to Swati Snacks.

Deepa I have enjopyed your posts on Chor Bazar and all other aspects of Mumbai for some time - always a pleasure.

Deepa! You seem to have fine-tuned the art of story telling.. making the "ordinary every-day Mumbai" sound exotic.. may it is - if you know how to make it that way... Hmmm...and once more: great images!

When we were leaving Dragonfly, Rajeev paused for a minute at the corner of Trident Hotel. It was night, taxis and cars were coming up Marine Drive. Rajeev said, "This place is something else. Doesn't feel like the rest of Bombay".

I agreed. Marine Drive is something else.

Dragon fly looks seriously swish. Will visit there when I come down to Mumbai ;)

I'm really looking forward to arriving in Mumbai, enjoying your posts...
I arrive on 28 October 2009!
I'm staying with a friend in Malabar Hill for 2 weeks before touring Rajasthan and Himachal Pradesh for 5 months!

Muchos Gracias for your blog article. Much obliged.

Enjoyed every bit of your article.Really thank you! Want more.