If you're ever near the JJ Hospital on a Friday afternoon, head for the Juma Market at Chor Bazaar. On Friday, the regular shops at Chor Bazaar close their shutters. Instead, a vibrant street market appears in the narrow lanes, selling everything you can possibly dream of. As you wander under the awnings, with the backdrop of the mosque and the sound of prayer, you feel like you're in an Egyptian or Arabian souk.
. 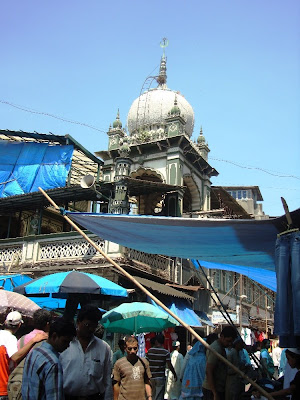 I don't know what it is about markets that fascinates me. Perhaps it's the sound of vendors calling out their wares briskly. Or perhaps I just like to watch people as they wander around, idly examining goods, or bargaining in earnest. 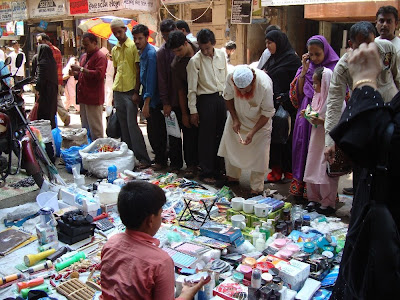 This young boy was having a good day, sales were brisk at his little plastic store. 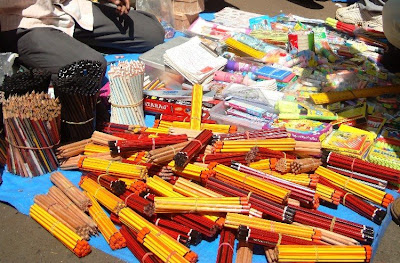 Pencils had to be bought by the dozen, but the prices were half that in regular shops. I wondered where the pencils came from. They said Natraj on them, but I don't think they were genuine.
. 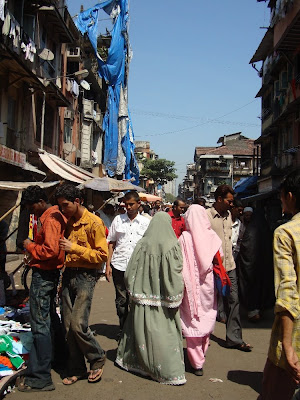 The Friday Market usually has more men than women. But I spotted several women looking for bargains at footwear shops.
. 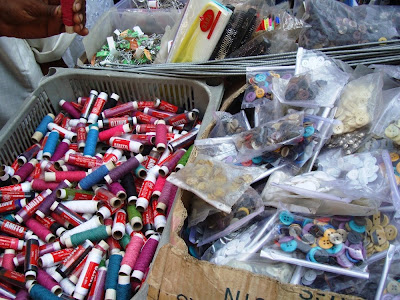 There was a big crowd of people - both men and women - scrambling to buy buttons and thread. Apparently pink is the new black. And blue buttons are hot. 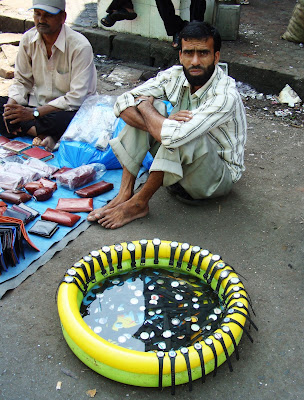 There were no takers for water-proof watches, although their water-proofness was beyond doubt! 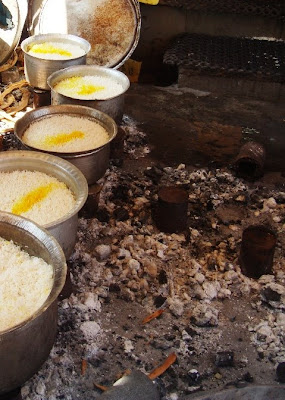 It was near lunch time, and big dishes of rice were being cooked on coal fires. Cooking had begun early in the morning; and now the saffron and bay leaf flavoured rice was ready. I was pretty sure there was a layer of mutton below the white rice.

"What's underneath the rice?", I asked anyway.

"Almost. We only need to add a little ghee on top of it now, and it's done."

I would have stayed to watch the ghee layering, but didn't have much time to spend. So I walked away, photographing everything I saw. A lot of the shops had hardware for sale - nails, hammers, screwdrivers, brushes, and other implements. But I also photographed roller skates, weighing scales, mixies, grinders, music systems, car horns and all sorts of other things. The only thing I didn't photograph was a little shop selling male underwear. It looked like branded underwear, Jockey perhaps, or something similar. The guy had a mike announcing his wares. By the time the announcement came crackling out on the speakers, I couldn't understand a word of what he said. I was quite grateful to be spared my blushes.

How the hell did you know that there is mutton underneath the rice? Was it the aroma or have you seen this kind of stuff before? Imagine an ignorant vegetarian person justt walking up to this stall and ordering a plate of rice just bcoz he's famished and it looks plain from outside. Poor guy!

This is a great post! I've always wanted to check Chor Bazaar, and this is a perspective I'd have never got. Thanks.

Deepa, that last photograph, the Mutton Biriyani one, broke my heart!

Now I am hungry and quietly miserable!

This may be surprise yuu; but I have been to Chor Bazaar about a dozen times in about 2 decades mostly on Fridays.I have not been there though in the last five years or so.. simply because.. I got "disillusioned". If you have seen the Friday Bazaar of yesteryears - it was indeed "thief market" - small odds and ends, small spare parts for old watches or tape recorders ans of course looking for a bargain model train accessory. I feel all this is gone now; it is mostly new stuff - perhaps it is a "generational change" the old miyabhais have given way to the younger generation who are no longer interested in tit bits - we "kids" used to be interested in.
But, no question, this place has a culture of its own including the "paya" which one of my friends dragged me to see cooked at 7AM on a Friday morning. Of course, I kept far away from that stuff even as he seemed to relish it!!

Ravi, I did see a lot of that kind of spare part stuff, wires and pliers and rusted screws and transistor parts and broken car horns and engine parts and all sorts of metal and plastic junk. I have lots of photos in case you want to go down memory lane!

Suren, I am still recovering from the 'dude' label. When the recovery is complete, I'll mail you!

Sure; some of that stuff is still there; but it is somehow not the same hunting ground that it used to be.. difficult to put a finger on it.. it looks all too "plastic" these days.

But; if you want to call yourself a Mumbaikar, a visa entry stamp at the Chor Bazar is a must.!
Ravi

Its a function of time.

ChorBazar in it heyday was an awesome flea market, where one could buy hard to find stuff for motorcycles, machinery, tube radios, car parts (sometimes stolen), Nike shoes (back in days when owning a pair made one cool), gun parts (yes, no kidding), and knives. The watches would be "Rolex", "Hamilton" and the ubiqutous gold plated "Rado"...
My father built an entire Philips spool player with parts, many of them from Philips, Holland purchased from CB.

A while ago, I was rebuilding an antique Royal Enfield and I needed the old style headlamps, handle, and a single seat. Thought CB would not let me down, but it was definitely disappointing. Could not even find a WWII style spring loaded single seat for 50s singles. (BSA,Matchless, Enfield).

Its still a great place to go meandering, but *most* goods are definitely not old school.

As with no friends here in the city...just started to search on the net to find somebody to give me company to roam in the city and there I stumbled upon ur post..read it, seems interesting...can u please tell me which area is this in and how to reach there.

also would be my pleasure if I get ur good time and company to see other parts of the city.

what a great slice of life...sorry I missed this when I was there....I bet that rice dish was delish...!

Sheena said...
This comment has been removed by the author.
7:47 PM

I am based in Pune, and trying to find the Juma Bazar..I have been in the vicinity twice, and had to come back without finding it (the fact that I can get out for only an hour at a time, cos of a little kid perhaps has something to do with it. So glad I found it featured on your blog.

I was wondering if it has antiques and stuff - if so, I wld love to feature that part of it on my blog - www.thekeybunch.com

Thanks! Your blog rocks!!

It is told that if you loose anything in Mumbai, you can find it in chor bazar.

if u want to get there the neariest railway station is grant road on the western line....get down to east...catch a cab....just say chor bazar...he will directly get u there...

The best blog to read about the 'shor bazaar' now renamed as chor bazaar...
I've always wanted to go there based in mumbai
And i've discovered it's only 5 mins from my office...
I'll visit there on friday...
Can i get football shoes and a nice bag there???
Pleazze reply..
-deep thapar (deepthapar09@gmail.com)

Hi friends ,thanks for all ,here param
here time is missed ,every one explained details, i have one doubt,
what is the exact timings , some one told me only Friday night 2- 4 AM .
after buying police people visit some times and asked where u buy and show the receipt like ,is it true or else.
i am in thane ,navi mumbai side going very difficult in night times due to this i stopped ,
tell me correct timings and
new T shirts and cloths and bags ,branded shoes by smuggled or old available
there for buying

Hi is it safe for females to go alone?

I used to go there almost every friday