Seeing Mumbai with a New Yorker

I went on a tour of the Fort district yesterday. My guest was a young American lady, a lawyer from New York. She'd just moved to Philadelphia, and she was going to start a new job at a law firm. This was a holiday - she was in-between jobs, and she was travelling alone.

As we walked around the Fort area, we saw a Ganesh procession. It was the first day of the Ganesh festival, when the idols are brought from shops to be installed in large 'mandaps'. Mandaps are temporary constructions of wood and paper that house the deity during the festival. The idols are transported amidst a lot of singing and dancing.
It was the drums that attracted our attention first. And of course, we could hear all the fireworks that heralded the procession (see the smoke?) 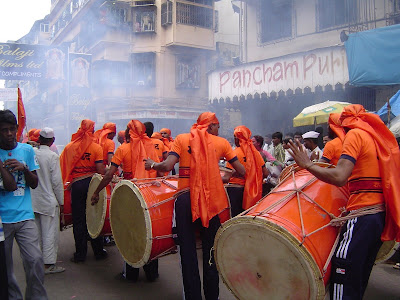 We also heard the clanging of the cymbals as the men danced in formation. 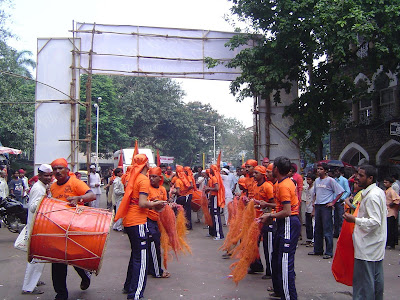 As if that wasn't enough, there was this big steel-and-brass gong. They were going at it with a metal hammer. 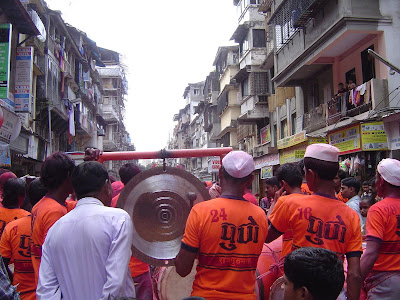 There were children on several trucks, here is one of them. 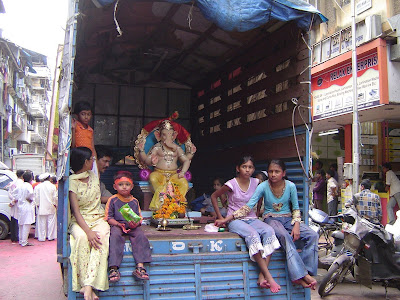 Passersby stopped to admire the idols. 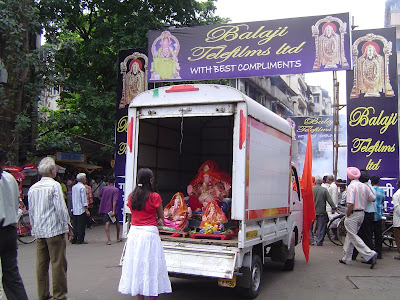 The sky was overcast, so this large Ganesha had a temporary glass enclosure. Hmm. I should maybe call this one Phone Booth Ganesha. 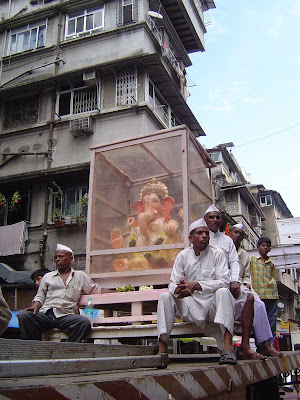 There was a lot of coloured powder being thrown around, but no one threw colour at us, or pestered us to join. 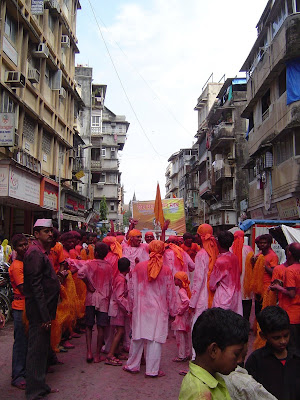 Once the processions left, we went inside Victoria Terminus to see the train station. Although it was a holiday, there were still a lot of people buying tickets, walking around, selling trinkets, and so on. No one paid us much attention...we admired the carvings, clicked several photos, and then we decided it was time for lunch. We went to Indigo, near the Taj.
"I think Bombay's a lot like New York" said my visitor over lunch. I looked at her, surprised. We had just seen Mumbai's biggest traditional Indian festival, and she thought it was like New York?

Then she explained - "It's got the same energy. Everyone's busy doing their own thing, no one bothers you. You're sort of anonymous, but you fit right in."

I thought of my last visit to New York - and the feeling of instant comfort that I had in Manhattan. Nobody gave a damn about me, everyone was busy, and the streets were vibrant with activity. I could walk anywhere, dress any which way, speak in any accent - it was all acceptable. To fit in, all I need to do was look busy. It was a very good feeling. Perhaps my visitor felt something similar in Mumbai.

Towards the close of lunch, she said "You know what, Deepa? When I walk around in Mumbai I get the feeling that as long as I don't look lost or stupid, I'll be fine."

I just *had* to smile. That last sentence was proof - she felt exactly the same way about Mumbai that I felt about New York.
Posted by Deepa at Sunday, September 16, 2007

the first thing i said on landing at NY Penn Station was "this is just like Bombay." Loved the crowds!

Echoes a sentiment here. I took my parents to visit NY on their first trip to the US and they were so unimpressed- reason, they didn't come all the way to see another Mumbai!!
You do capture the images really well, makes me nostalgic!

Wonderful pictures of the great festival!