I always love taking visitors to Mani Bhavan, Gandhi's Mumbai home. It is on a quiet leafy lane near Chowpatty. On the top floor there are a series of tableaus, depicting the story of his life. Several tableaus illustrate his non-violent protest against injustice, and the last few tableaus tell the story of his assassination and funeral. 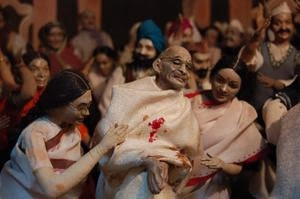 The violence of Gandhi's death comes as a shock. That this frail saint, this icon of peace, should die so violently, is hard to accept. In today's context, where the news is full of violent global wars, you begin to despair of a solution.
When you walk back downstairs, you notice a set of posters on the wall, each framed like a painting. In one of them, Gandhi talks about non-violence, and the role of women. Here's what he says: 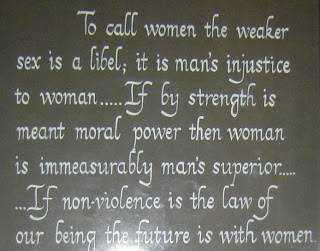 The last sentence made me stop and think. Is it true, that women are somehow, essentially, more non-violent? And that women hold out hope for a non-violent future for all of mankind? Or is Gandhi merely propagating the myth of the long-suffering, all-sacrificing Indian woman?

Speaking to a group of women in Italy, Gandhi apparently said "The beauty of non-violent war is that women can play the same part in it as men. In a violent war women have no such privilege." That was true, of course, in India's struggle for independence. Indian women played a large role in Gandhi's fight for freedom, there were many women in all his campaigns. It was a non-violent movement, that made it easier for women to participate equally, and walk shoulder-to-shoulder with their male counterparts. You had to be brave, to face the lathis and batons, but you did not need the muscles to hit back.

In a meeting in Paris, he said "I have no doubt that (women) can do infinitely more than men against war. Answer for yourselves what your great soldiers and generals would do, if their wives and daughters and mothers refused to countenance their participation in militarism in any shape or form." His statement was based on his observation of his wife Kasturba. It was Kasturba's passive resistance to some of Gandhi's unreasonable demands that made him change himself, from a domineering traditional husband to a more considerate one.

I'm a little confused about this stuff. On the one hand, I believe in equality of opportunity in all spheres, including the armed forces. Today, we have more and more Indian women entering the armed forces and the police. On the other hand, here is Gandhi, asking women to stand up for non-violence.

So what do you think? Do you agree with Gandhi? Is his view of women as essentially peace-loving creatures correct? Is passive resistance the way to go, or is it just an old fashioned idea? If women took a stronger stance against wars, will there be fewer wars?

No matter what your views, Mani Bhavan is worth visiting. It is inspiring, thought-provoking and definitely a must-see place on your itinerary.
Posted by Deepa at Saturday, May 26, 2007

Lets not talk about wars. Lets talk about women being more supportive for more women to climb the corporate ladder. the truth being that women are not properly networked like the men are. the men have their old boys network that help each other to climb the corporate later and the so called successful women think themselves one up than the women who are still struggling. Sad , but true. Difficult to digest , but cryptic !

I would like to think women "by nature" are more peaceful than men are but I'm afraid that's an illusion."peaceful women", hating all wars can be found in a set up where "all men" go to war fighting -for a cause surely and sad worried women and children are left behind at home in fear if ever they will see their loved ones back.
If both women and men have fully equal opportunities I'm afraid they are the same in possible" aggressive behaviour"..maybe in a different but not less ëfficient"way.."war"starts on your doorstep:little girls might not openly "punch the nose" or "kick the knee" of a pal..as little boys do..- for you to see and "take action"..but might "pinch" and bully around unseen and unnoticed.. all this behind your back - ahh my experience as a summercamp leader of "citykids"

Non violence could be a religious decision (men and women alike)as is the case with the quakers, refusing to execute any violance and not taking part in any army but rather go to jail if "joining the patriot's game becomes mandatory.
Prepared for people thinking a quaker is a coward the "standard quaker answer" on "but what would you do if your daughter was raped by an invading soldier in front of you" the answer would be "that is a hypothetical question"..The real proven answer (for male and female alike) of what a nonviolent quaker WOULD do is.."you go blind crazy and attack".
I would consider myself as "non-violent"..yet in the only "war" I've seen life..(Belfast Ireland in 1977: they called it "troubles"..well bullets were flying around in front of me...)I noticed that in 10 days time only - and I was no "party in the conflict", I was there for a wedding - I started to "hate" the "Brits" as the Irish did (my own feelings worried me to a large extend)and there is no telling how long it would take for me.. peaceful by nature, female and all to "translate" hate into "action"..as in fighting back.
Joined efforts -real efforts of all since it's "work" of men and women alike wordwide to respect, to talk, to understand might lead to a fragile peace worldwide..
11th of september 2001 I was in a "snackbar" getting some food, NOT taking part in the heavy discussion between the Egyptian Muslim owner -a refugee - and a whole bunch of 15 year old Netherlands born Muslim GIRLS, litterary "chearing", applauding and supporting the Twin tower attacks...they thought it "was just right", wished THEY could do an "admirable" thing just like that..and all HIS "reasoning"..just did not "sink in"..My -western white -"input" would have made the tension worse but I talked to him later..he was worried and sad.., he still is..

"Patriot in motion,there's the cause of the commotion,
after all there's really no one here to blame.
Soldiers taking orders,
cause they must defend the borders of our nation,
and the other side's the same"

This is definitely not passive resistance.

Around the World said...

Your blog has been included in our new guide.
Please keep us informed of any changes to it.

nice post. gandhi was inspired greatly by the gita. you can read about it at http://www.gitananda.org/about-gita/index.php

nice post Deepa,i believe that world peace can only begin in the heart of every individual.inthe words of a sebian author who's name escapes me ;beauty will save the world;
confronting hate with hate can only give us what we have today,hate needs to be confronted with love.If more men were in touch with what Carl Jung called there animus[thier female side]we would have more chance of world peace

i cant but help intutively beleive that women in general are the more peaceful gender...perhaps due to ages of social conditioning....its hard to define "inherent nature"..its a mixture of historical conditioning..and structure of the mind.