- By Deepa Krishnan
(Published in DNA, Around the Blog, Aug 27, Page 7, under "The smelly Bombay Duck")


I swear, this is the ugliest thing in the fish market that I have ever laid my eyes on :) :) Seriously. Look at that mouth: have you ever seen anything like it? 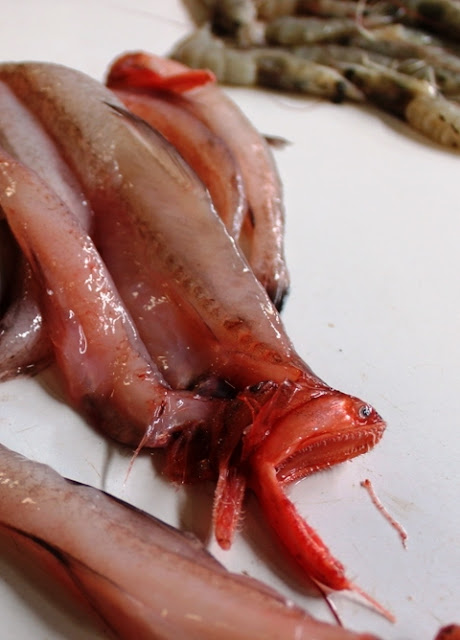 This then, is Bombay Duck, the lizardfish that is named after this city. It is found along the  Western coastline of India, and also in the Indian Ocean. It goes by many local names - bombil in Marathi, bomla in Gujarati and lote mach or lotia in Bengali.

In the fishing villages of Mumbai, you'll often see Bombay Duck salted and hanging to dry. Once they are dried, the fisherwomen bring them to market. This photo is from the fish market at Dadar: 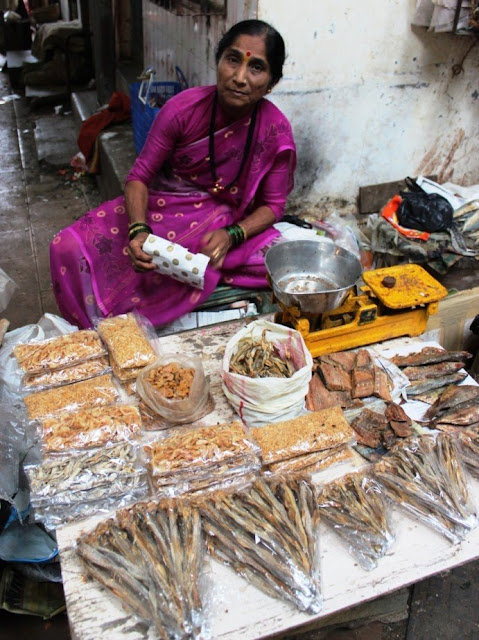 Apart from Bombay Duck, the fisherfolk dry a wide variety of shrimp and fish. In the monsoon season, when they do not go fishing in the choppy seas, these are the mainstay of their cuisine. Because of the way it is salted and dried, bombil has a very strong crumbly salty flavour. So it's a bit of an acquired taste. And let's face it, this is one smelly fish. If someone is cooking dried bombil, all the neighbours know it :)

The most popular way in which fresh bombil is eaten in Mumbai is bombil fry. In Goan and Konkan coastal homes, it is a popular dish - you cut off the head and the tail, slice the fish in half, remove the central bone, salt lightly and place a weight on it to remove the water content, then marinate it in green chilli and garlic, coat it with batter (rice flour) and fry it. We did a cuisine tour in my friend Sancia's house, and this bombil fry was a big hit with our Dutch and English visitors: 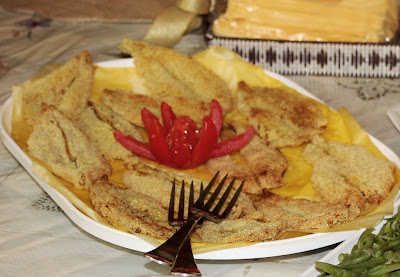 The Parsis also make bombil-fry, except that they keep the fish whole, and while they do remove some water content, they don't dry it out as much as the Goans do. Their marinade is red chilli powder and turmeric, and traditionally it is deep-fried in rice flour batter.

It's a relatively easy dish to make, so if you haven't tried it before, then give it a shot! Or if you want to just take the easy way out, you can get it at seafood restaurants in Mumbai. Gajalee, for example, does a great bombil fry, here is Karen Anand's video of the restaurant. Enjoy :)
Posted by Deepa at Sunday, August 19, 2012

Chutney made from dried Bombay Duck is the best :-)

Interesting post! I knew about the Bombil being the most dirty fish you could find. This added a new dimension to what I knew. Memorable one!

I presume we could stay in touch on a regular basis through e-mail or via phone. I am also trying to do the lesser known aspects of Bombay on my blog and it would be nice if you could do a guest post for me. :) .

Thank you Harry, I will correct it.

I really dont know why you find Bombil so Ugly maybe all other fish mouths are not open like that.

They are really delicious to taste and many people in Mumbai just loved its also famous with foreigners too.

I just stumbled upon your blog and wanted to say that I have really enjoyed reading your blog posts. Any way I'll be subscribing to your feed and I hope you post again soon
Online Shopping India

That is delicious and so healthy!!! thanks for sharing this authentic and tasty dish!!
chowringhee in Laxmi Nagar

We Goans also make a dry Bombay duck pickle which can be preserved for a long time. My grandmother used to make it in this rich red vinegar masala and store it for the monsoons. We used to then fry it in shallow oil and have it with dal rice. Brings back memories.

Your knowledge level is zero. You are just mad. Do you know the nutrition fact of bombay duck?