I've been working too hard, frankly, and so has my husband Pramod. This weekend, though, our friend Ranjana (bless her!) came to spend Friday night with us; and we finally made time for a long overdue night out in the city. 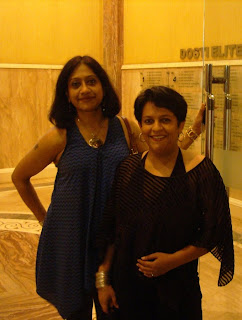 Friday night, at our apartment complex, waiting for the car.
I'm wearing a halter-neck top that I bought eight years ago. That's how dated my wardrobe is. As I was dressing up, I decided enough was enough. I would definitely go shopping on Saturday. Being a workaholic is ok. But wearing the same darn thing over and over again? Sheesh. I'm not *that* ossified.
.
When the car came, we set out for Bandra, to pickup an old school friend of Ranjana, and then headed to Aer, the rooftop bar at the Four Seasons. 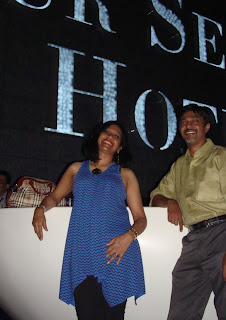 Ranjana and Pramod at the Four Seasons rooftop bar
If you want my honest opinion, this is truly the most outstanding piece of real estate for a bar/restaurant in all of Mumbai. The cover charge at Rs 3000 per couple is stiff by the city's standards, but the incredible view of the city glittering below is very worth it. We hung around at the bar for a few minutes, until our table was available.
. 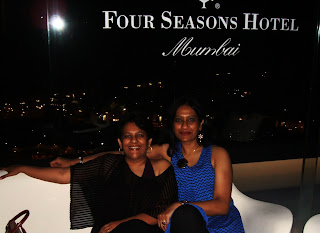 City glittering below
Honestly, this photo does no justice to the view. The full moon was out overhead, and the city lay beneath us. The walls are of sheer glass, making the most of the view. The seating is a sophisticated white, and the dim lighting is perfect. It lifts the spirits, this place. 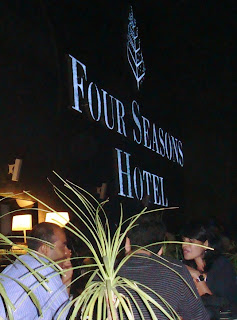 All seats taken
On a Friday night, all seats were taken. The crowd is a mix of all age groups; but this is not a teeny-bopper place; it is significantly older. There were many people here catching a drink after work; I saw a lot of business suits and formal office wear. The Four Seasons is very conveniently located for people with offices in Worli and Lower Parel. For those working in Nariman Point or Fort, it is a logical mid-way stop on the way home. I rather liked the feeling of being part of the "office crowd". Tables are large, so even for bigger office groups of 8-15 people, there's lots of space.
We ordered nachos and chicken satay; the nachos were not as crisp as they should have been. The satay was pronounced excellent. I didn't even look at the menu; so I don't know what else was on offer.
The worst part of Aer is really the music. The night we were there, it was some electronica/techno type of thing; totally ugh. After an hour of listening to it, I was ready to give up and die. Pramod - who is more sensitive to music than I am - walked up to the DJ and said, hey, check out the people here, do you think this is the kind of music this age group is looking for? As it turns out, the DJ had nothing else to play; or maybe he had been instructed to play nothing but this nonsense. Pramod and the DJ chatted amicably for a long time; while the rest of us looked on and wondered what they were talking about - maybe they were earnestly discussing the city music scene :)
It was a relatively cool October night, but I think November-February would be perfect. I'm definitely going back again, to see if the music changes at all. Fortunately, the music isn't loud.
After Aer, we went back to Bandra and dropped off Ranjana's friend.
.
It was midnight by then; and on an impulse we decided to check out more places. I dragged Pramod and Ranjana to Pali Village Cafe for pasta and dessert and coffee. But we got there too late; they could only offer wine and dessert. So off we went to that old favourite, Olive. 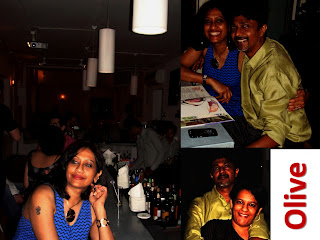 Chilling out at Olive
For a place that is so much part of the city party scene, Olive is quite unpretentious. The food is good, the service is decent, and the crowd is a merry mix of all sorts. We found a nice corner at the bar to hang out; and then Pramod wrangled us a table to take a late order for pasta and pizza and tiramisu. Quite a lovely end to the day.
Oh - and one more thing - if you're wondering whether I kept my shopping resolution - here's the proof :) 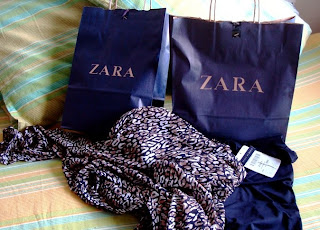 A productive Saturday afternoon at Zara
We went shopping at Palladium on Saturday. Ranjana and I were joined by my sister, and we spent a happy afternoon trying on all sorts of things.
Zara is such a delight - I could kiss every single designer that works for them. By some miraculous magic, the clothes at Zara make you feel feminine and beautiful, in a way that other stores don't quite manage. Ranjana bought up half the store; and my sister bought winter clothes for her upcoming trip to Istanbul.
.
I was content with three simple additions to my wardrobe. But I'm already looking for another weekend out now, so I can wear them. Pramod, are you reading this? :)
Posted by Deepa at Sunday, October 24, 2010

So on our next visit to Mumbai, Zara will be will be one place to look into.

Being an ardent Mumbaikar, I have been an avid fan of your blog. Cant wait to see what part of Mumbai you will dig up next!! And looks like you are connected to the folks @cnngo.com.
I was just checking out Aer last week and made it a plan to include it in my next trip to Mumbai!! And lo and behold, you write abt Aer!!