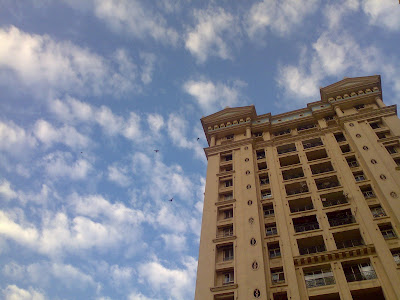 Like all other tall buildings in Bombay, the lifts in our apartment complex are operated by liftmen.
.
They sit inside the lift on a little stool, but stand to attention when any of us enter the lift. We tell them what floor we want to go to, and they press the right button. That's their job. To stand at attention, and press buttons.
..
There are several liftmen, all nameless. They go by the generic name of "Liffffffftttt!" because that's what we yell whenever we want to grab their attention. The residents of our apartment don't really 'see' liftmen as individuals or address them by name.
.
This is not true of all buildings in the city. I have seen, in some buildings in Napeansea Road and Cuffe Parade, greying liftmen who have been there for ages. Everyone knows them, and their names are heard often. "Ganpaaattthhhhh....jara lift roko !!!".
.
One of my friends lives in a Parsi colony where the lifts are ancient. The liftman is a critical part of their life, because the lift must have manual supervision, and it responds only to his magic touch. ("Oh God I'm getting late for office, where's Kadam, the lift is not working"). As a consequence, there is, in this colony, a "tring-tring" bell to summon the elusive Kadam. Kadam is also an errand-man ("Dina darling, I forgot my car keys, can you send it down with Kadam?"). Like the lift, Kadam is also a fixture, grey and creaking.
.
But in our building, the liftmen change every other week, using some sort of complex roster system that I haven't figured out. Our building, like most tall buildings these days, has sub-contracted the maintenance and security to an agency. So we have armies of smartly uniformed staff, but we don't know their names. By the time we find out who they are, and exchange the first pleasantries, they're gone.
.
In addition to the liftmen, we also have a guy who sits at a desk on the ground floor, just opposite the lift. I'm not quite sure what he does. He goes by the name of 'Security', although I'm can't see what security this skinny kid provides (there is a another bunch of older, somewhat tougher looking Security guys at the gates). The 'Security' desk is a promotion from the lift, I think, because you only get to sit at that desk once you've done the lift assignment and you know all the residents of the building.
.
Today there was a new guy in the lift, even younger than the previous one. This one looked like a new migrant. He was uncomfortable with his navy-blue uniform, he kept fiddling with the big fancy belt buckle, and didn't know numbers in English. So the Security guy helped him, by telling him my floor number in Hindi. He still messed up and pressed the wrong button, and stood there dejected when I quickly pressed the right one. "It's ok", I smiled at him, remembering my first job and how terrified I had been. "You'll learn soon". He was too raw to even nod or acknowledge what I said, let alone smile.
.
Hmm, I said to myself when I got off the lift. One more new migrant. One more guy here to see if the city will work its magic on him. They keep coming, these young hopeful men, barely out of their teens. Maybe his uncle is here in the city; and is providing the initial support. Or maybe it's someone else from his village, who has brought him here, introduced him to the contracting firm that manages our lifts, and stood guarantee for him. I hope he will learn the lift numbers quickly, before some resident complains.
.
I recently had an overseas visitor who laughed and said "God, why do you guys need a guy to push lift buttons? Can't you do it yourselves?" On the face of it, this looks like a logical statement. But I was recently in a lift with a precocious kid, who pushed the emergency button, because the lift was unsupervised for 10 minutes. My new maid doesn't know how to summon a lift, let alone operate the number keys. My mother doesn't like being alone in the lift. Almost no one knows what to do in case of an emergency or a lift stopping midway. So I say, until the state of affairs changes, until everyone gets an education, Let There Be Liftmen !
Posted by Deepa at Saturday, September 18, 2010

Great story. Made me think about my times chatting up liftmen. Elevators here just aren't the same as lifts.

Reminds me of the closing lines of Milton's poem, On His Blindness: They also serve who only stand and wait...
Brilliantly written Deepa. I'm reminded of this lift guy at my earlier office in Andheri. He would be reading the Hanuman Chalisa every morning when you enter the lift and would be reading Saamna every evening when you are leaving! The liftmen are a small but definitive 'hisab' of our lives, and most definitely never spoken about.You've WRITTEN about them! Awesome stuff!

why do we need liftmen-- bez it way to generate employment.. once everyone is educated then we still need paper pushers.. that's for better economy..

Oh yes I have heard this Liifffffft call in many buildings.
And the change of the security people at the drop of a hat is another problem in big complexes.
One of the reasons I chose a single building society and that too with only 4 floors.
Being on the 3rd floor, I always prefer the staircase. Nothing better to keep you healthy.

Frequent electricity outages magically resolved by the liftman with a lo-o-ng key. Little kids who love pressing all the buttons just before getting off the lift - errant passengers who keep lift doors open while nana finds his shoes and nani comes from her bath. the workmen who try to fit in larger than capacity items - I say, thank God for liftmen

'Liftmen' in NYC don't change much and can expect a Christmas tip from residents. How are tips handled there?

Beautifully written, and yes, why do we need someone to do what we can all do ourselves? To give us a feeling of self importance I guess. And it's not just lifts this applies to -- this is why we still have domestic staff in this country when most of the world gave that lifestyle up in the early 1900s. Shame on us (but it does provide employment -- with slave conditions)