The Oldest Synagogue in Mumbai

I went to Bhendi Bazaar recently with Freni, walking through the areas surrounding Minara Masjid. We were looking for Shaar Harahamim, the oldest Jewish synagogue in the city.
It was Ramzan, and everywhere there were interesting stalls selling all sorts of things. 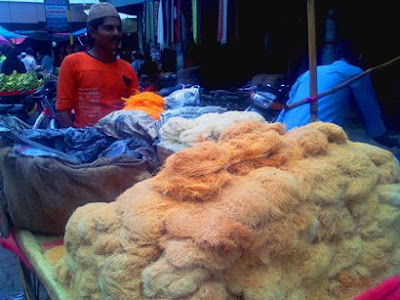 This is seviyan, right? Is it for kheer?
I was starving, and it was lunch time...then I realised everyone around me was fasting! Normally, I can't stand being hungry, it gives me a migraine...but when I thought about everyone else I saw, and realised they would all not eat until the evening iftar, it gave me the backbone to walk further.

In all my 40 years, I have never been to this side of the city, so everything was new and interesting to me. I photographed an old building, Dawoodbhoy Fazalbhoy School (the Trust provides scholarships for Muslims to study abroad). I wondered who the Fazalbhoy family was, and what their history is...perhaps they are one of the early trading families that came to the city of Bombay under the British. Or maybe someone in shipping? Are they Memons? This is the sort of history I'm always curious about, so if any of you know, then do post a comment! 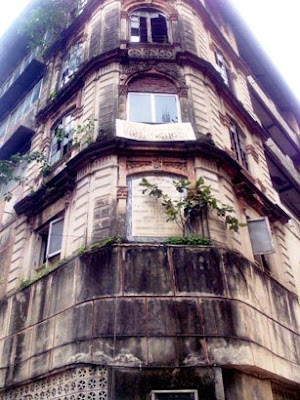 Dawoodbhoy Fazalbhoy School
Eventually, we found ourselves on Samuel Street. I spotted a bhelwala, and gave up on starving myself. So munching sukha-bhel, Freni and I strolled on, chatting, peering through side lanes, looking at old homes, small trading shops, enjoying the bazaar buzz that is very typical of old Bombay. I'm addicted to this sort of thing, and Freni is so wonderful to walk with...sigh...everyone should have a friend like that!

After about 30 minutes, we finally came to a little door, painted blue, with the sign we were looking for - the Star of David! 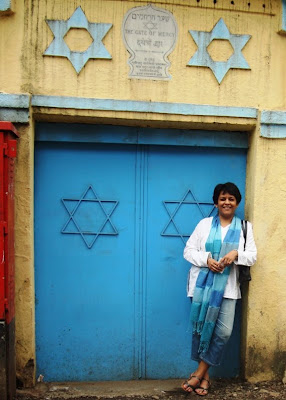 Shaar Harahamin, The Gate of Mercy. In Marathi, it is Dayeche Dwar.

Entry to the synagogue is through a still smaller side door, the sort that you have to bend to enter. 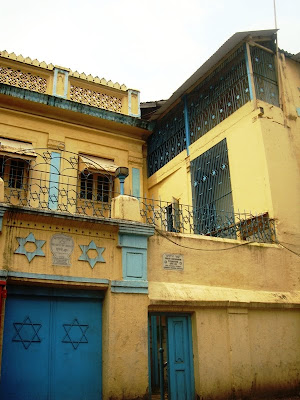 Exterior view of synagogue with smaller side-door. On the higher floor is the ladies gallery.

We went inside, and found the old caretaker, who gave us a wonderful tour of the place in Marathi. This is a Bene-Israeli synagogue. 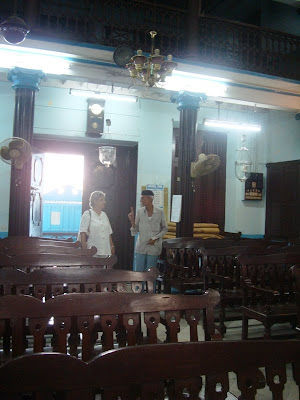 Freni chatting with the caretaker.

The Bene Israel are the oldest Jewish community in India. Their ancestors were shipwrecked and washed ashore the Konkan coast, south of Bombay. The survivors - seven men and seven women - buried their dead in a site near the village Nawgaon, which later became the Bene Israel cemetery.

The survivors were offered shelter by the local inhabitants and decided to settle permanently in the Konkan villages. They adopted Hindu names similar to their Biblical first names, but became known by their “-kar” surnames, which indicated the village in which they lived in, or sometimes, their occupation. So for me, the most fascinating thing about the synagogue were the name boards!! 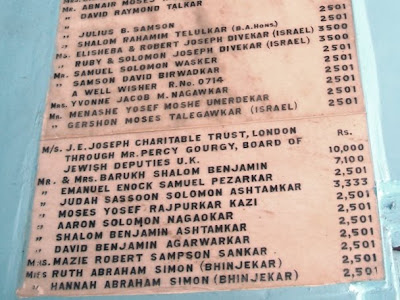 What an interesting collection of first names and surnames! Moses Talegawkar, from Talegaon of course!

The synagogue itself is very quaint. I loved the old mezzuzah that was affixed to the doorway, and the beautifully carved door that housed the Torah. The furniture is all old wood, and the benches are solid, with no nails. I tried to move a bench, but it was too heavy. The gallery for women is separate, on the first floor, and there are steps on the outside that you can use to go upstairs. The caretaker told us some interesting tales, and explained his daily routine. I found it very interesting that the lamps in this synagogue are lit with coconut oil. And he showed us how he makes the lamps and places the wicks.

If you are anywhere near Bhendi Bazaar, I would recommend going to this synagogue, for a glimpse of an interesting community that has played an important role in Bombay's history. On the Mumbai Magic Jewish Heritage Tour, my guides have been taking people to this synagogue. But I wanted to see it for myself, and I'm glad I did!
Posted by Deepa at Friday, September 18, 2009

It's a very interesting piece on the Jewish community. How many people (Bene Israelis) visit the synagogue in a week?

On Saturday morning my husband and I were walking past the Synagogue at Fort ( behind Rhythm House) and heard the wonderful sound of prayers inside! Unfortunately we weren't allowed to go inside and have a peek. Lucky you to be able to see the place

Sadia Shepard's book- The Girl from Foreign, mentions this very synagogue in addtion to a couple others. The book is about her journey through Maharashtra trying to locate her ancestors place of origin.

Aha, I was going to mention Sadia's book... but I see someone's mentioned it already. I picked it up just today (yahoo! for Landmark sale) I believe it's a very interestingly written book about her voyage of discovery... will give you a review soon...

Seen it's exterior though I could not enter inside since it was closed that day. Maybe another time. But I've been inside the Kenneth Eliyahoo Synagogue at Fort many times.

Your details are vivid and the pictures confirm it.Nice commentaries and tidbits.Love your photos too:)

there is a rumor that one of the 12jewish tribes have been missing - may be this is where the ones who surived the ship wrecked landed..

We had a Miss Kolatkar when I was a kid in school - Maharashtrian I thought, but she was Jewish. This piece explained it all.

I bet the process of placing the wick is perfected and does not allow the oil to spread out and form large puddles around the lamp.

Must try to get into the Red Sinagouge in Pune (they are very secretive about it)
Hi Deepa, on your advice I have started a blog on the same site.

Great article and some great pics.

I've been planning to start a photo blog. Initially I thought of keeping it limited to pics only. But, after reading and going through this blog, I've decided to make it similar to this blog i.e. photos along with description and/or other write-up.

The Girl from Lokhandwala said...

I was born and brought up in Mumbai but I have never been to this place(actually not only this but now I realise there are many more..) Next time I come to Mumbai, I will definitely visit this place.
BTW, I love everything that all three of you write. It's fantastic. All the best to you!

my God, i thought you were going to chip in with some decisive insght at the end there, not leave it with ‘we leave it to you to decide’.

Hi,
Some years back I visited the Magen David synagogue near JJ Hospital with a Jewish friend from UK.
There was no one there except an old caretaker who took my friend inside, opened the sanctum for him, made him wear the cap and waited patiently till he finished praying. When they came out, I asked him his name and he said very matter-of- factly,
"Mohammedbhai". This can happen only Bombay! The fact is that the Jews in India have no history of persecution or any conflict with Muslims and there is no reason for them to bring the Israel conflict on their doorstep....

Incidentally we know the family behind the Dawood Fazal Truest and the fantastic work they have and are still doing, shall shortly revert with details and contact details if you are still interested.

alinawaz, I'm interested in everything and everybody :) My email id is deepa@mumbaimagic.com

Deepa, I loved your blog - though it was somewhat terse, probably because of blog (and broadband ) limitations. Your chatty story-telling style was delectable and is much appreciated. I am originally an Indian ( still am, as a matter of fact -), have lived in Cleveland, Ohio, USA for the last 40 yrs. I live in a neighborhood which is 80% Jewish, and I was doing some volunteer work to assist a jewish grad student on her sociology (!) paper. ;-) - when I ran across your blog - on Bene Israel surnames, no less. :-O)

I had lived in Bombay for about 11 years, off an on, and left India in 1970. I visit India and Bombay about once a year, generally in Jan-Feb. I have lived in Khar (W), Bandra (W) and Santa Cruz (W), and for a short period in Grant Road, but I have NEVER visited Bhendi bazaar or its surrounding environs, probably because of its putative fearsome reputation ( however much undeserved.)

The synagogues in Bombay (and in India) are mostly decaying and falling apart because the community itself has dwindled to a dead end ( literally -). Metropolitan Cleveland, Ohio is not quite a booming area, compared to say, Chicago, but the jewish community is doing very well, thank you, and the modern synagogues are a wonder to behold. The architecture is trend setting, iconoclastic and awe-spiring ( which indeed, as a house of God, it should be - ). The Maltz museum on Judaism and Jewish History, is also located here.

My sincere and cordial best wishes on your continuing enterprise.

Does anyone have a picture of Keneseth Eliyahoo, Magan David, and/or Tiphereph Synagogues? I have visited them, but now am confused about which temples go with which photos.

I have photos of all of them. There is a photo of Magen David on the Mumbai Magic website:

http://mumbaimagic.com/jewish_heritage.htm
It's the first photo on the left. A pretty pale blue building with a tall entrance.

The second photo in the same page is the interior of Kenneseth Eliyahoo. This synagogue near Rhythm House is currently a bright blue.

I haven't been to Tippereth in a while, so don't know what colour it is now. When I last went it was a cream-yellow I think, can't remember correctly.