- by Deepa Krishnan
.
In the little lane behind the Mumbadevi temple, doodh pedhas are still made the old fashioned way.
. 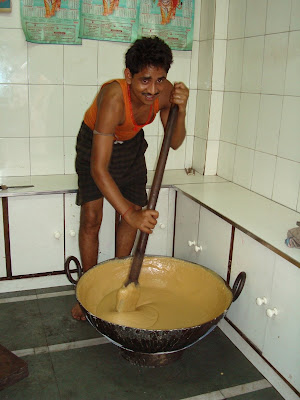 Milk is mixed with sugar, heated and stirred constantly, until it thickens and acquires the colour of a creamy latte.
. 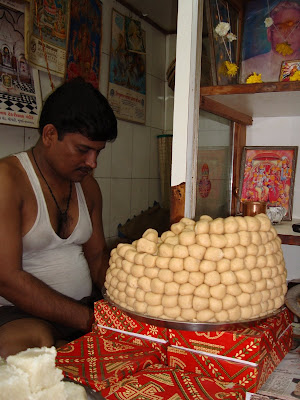 It is then hand-rolled into little offerings for the Goddess Mumba. Not that she hangs on to them permanently - she merely blesses them, and the priest at the temple hands them right back to you as holy prasad.
.
Prasad or prasadam is a Sanskrit word which refers to any material substance that is first offered to the deity, and then consumed (usually fruits, sweets, flowers). The process of offering is called naivedya. Once accepted, when the prasad is returned to the devotee, it has the deity's blessing residing within it. So every temple visit usually has a two-way transaction in it...you offer something to the Gods, and you get it back enriched with blessings. What's more, when you go back home, you also get to share it with friends and family.
.
In the early Rig Vedic texts, though, prasad was something else altogether. It was originally a sort of inner mental state experienced by the Gods, or by wise sages, characterised by a spontaneous generosity and a bestowing of boons. The morphing of this mental state into a material substance appeared only in later texts. Perhaps devotees needed something concrete to take back from the daily ritual of prayer at the temple. Or perhaps this very pragmatic religion understood that religion should nourish not just the soul but also the body! Personally, I like to think that the ancients discovered guilt-free eating many years ago, and institutionalised it into edible prasad. At the Mumbadevi temple, you get to take prasad home and eat it happily, safe in the knowledge that you're acquiring merit with every calorie!
.
Coming back to the pedha - to me, the doodh pedha has always been a very comforting sort of sweet. Perhaps it is the simplicity of the whole thing - just milk and sugar, really, stirred patiently for hours. The texture is not too grainy, and not too soft. It is a perfectly balanced fudgy smoothness that melts when you bite into it.
.
Some pedhas have dry fruits and spices for flavouring. Cardamom is popular, so is saffron (kesar peda). But honestly, I like my pedhas simple. Milk and Sugar. That's all I need. Why mess with something that works so well?
.
If you go on the Mumbai Magic bazaar walk, make a pedha offering to the Goddess. And tell me if you like your prasad plain or flavoured!

I used to enjoy these (both plain and flavored)...sadly, I can't eat them anymore, along with many other dairy-containing treats!

i love the Sakhari Pedhas that Chitale Bandhu make so well :-). These are the regular pedhas rolled in sugar, not the regular granular kind, but slightly finer, though not as fine as the castor sugar...

I was looking for this recipe for very long. I will try making it at home