There and back again - A family holiday to Murud Janjira

- by Aishwarya Pramod
We started off on a Friday afternoon in our trusty Innova for Murud, a quiet fishing village, a mere 165 km away from Mumbai. We had heard of the island fort of Janjira, and my mom, being the history freak she is, HAD to see it. We drove through Pen & Alibagh (small villages on the way) and by early evening we reached the Golden Swan Resort, a nice place right by the beach.

The first thing we saw was this fort in the sea (can you see it in the distance?), and naturally, we thought it was Janjira fort. 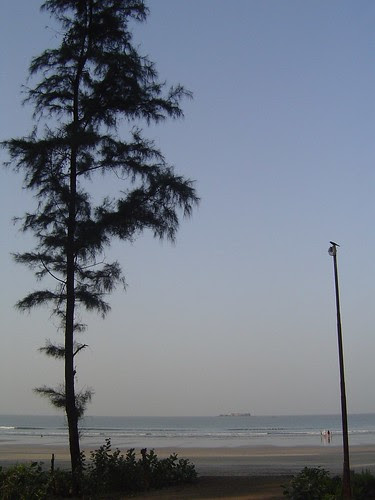 But as it turned out, there are TWO island forts in Murud. This one was called Kasa fort, it was built by Shivaji’s son Sambhaji after repeated Maratha attempts to conquer Janjira fort failed. By the way, that’s a Casuarina tree in the foreground of the photo. At night we saw a noisy fruit bat colony flying out of the Casuarina grove.

We had a great dinner, watched TV, and got up the next morning, refreshed and ready to see the Janjira Fort (well, I dunno about the others but mom was definitely ready).

We saw these deserted ruins on the drive to the fort, and later found out that they were the tombs of the Siddi kings, who built Janjira Fort. 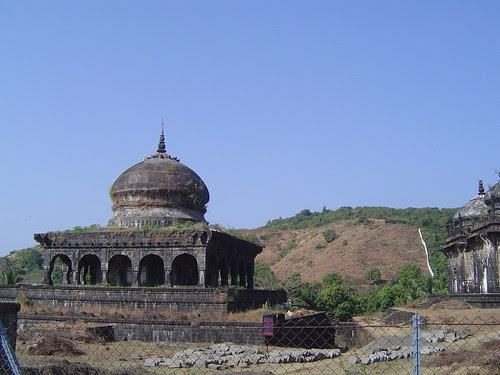 The Siddis are black Africans who were originally sold as slaves in the Indian subcontinent. However, because of their success as fighters and seamen, they rose gradually to power. Small Siddi kingdoms were established in Western India in Janjira and Jaffrabad as early as the twelfth century. The Siddis played an important role in the history of Western India, particularly in the struggle between the Marathas and the Mughal empire; with the Siddis often aligning themselves with the Mughals.
Here's a closer view of Janjira fort, accessible only by sailboat. I’d never been on a sailboat before. This was a novel way of traveling - no motors, no noise. Very Siddi. 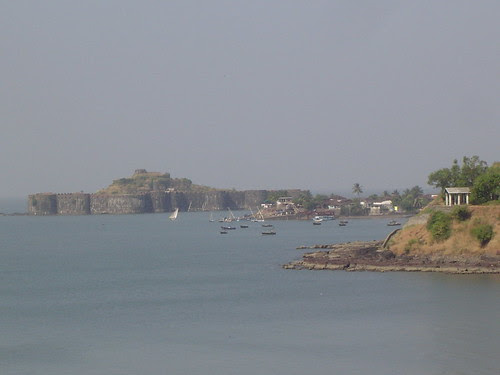 Mom and dad in the sailboat. The white sails are really nice, don’t you think? 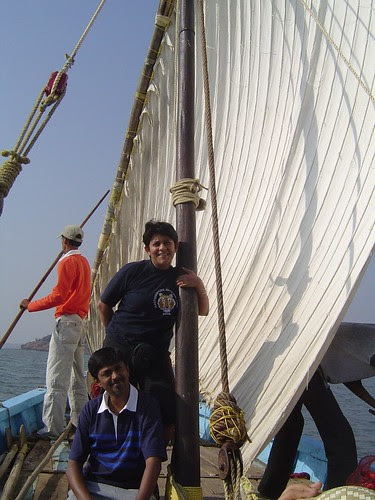 The first thing we saw when we disembarked at the fort was the royal insignia of the Siddis , a lion climbing up on the backs of elephants. Does that signify Africa over India, I wonder??? The boatman told us that in order to gain access to the fort, outsiders had to first display a coin or ring with this seal. 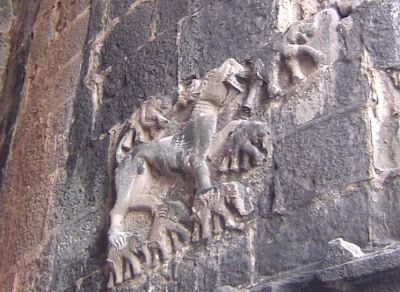 The fort is large, and there's lots to see. There are nineteen rounded bastions; each bastion houses a cannon, intimidating would-be attackers. Here is one of the smaller cannons. It is called ‘Go-Mukh’ meaning Cow-Face. (You can see why, right? Check out the ears!) The cannon is made of an alloy which keeps it from getting too hot in the summer sun. 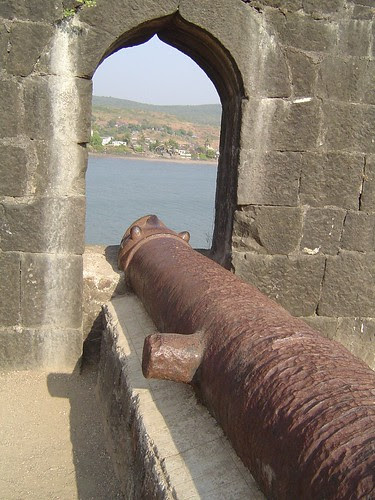 This is the water tank inside the fort, fed both by an underground spring, and rains. 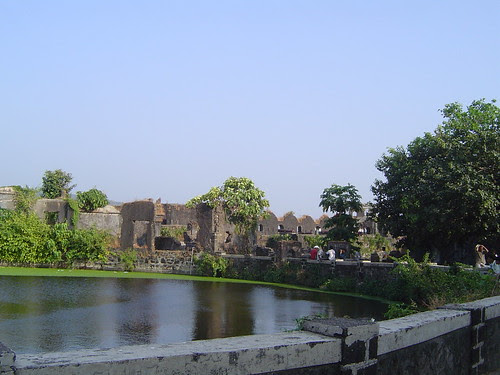 Down below is a secret entrance into the fort, designed cleverly to look like just another window. During high tide it is completely hidden by water. 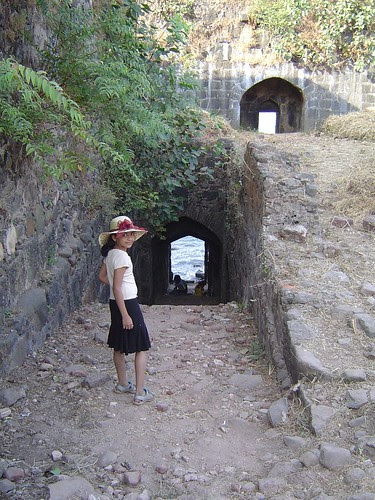 The guide also showed us an undersea escape passage from the fort, which is supposed to open out into the mainland (I didn't know whether to believe him!). The passage has now been boarded up, for safety, he said.

We left the fort and returned to the mainland, again by sailboat. On the drive back to the resort, we saw the palace of Sir Siddi Ahmed Khan, the Nawab of Janjira. Before this palace was built in 1885, the Nawab used to live in Janjira Fort. Now his descendants live here. The Nawab was a very farsighted man. One of his many projects was the Victoria Jubilee Water Works, which even today supplies water to Murud. 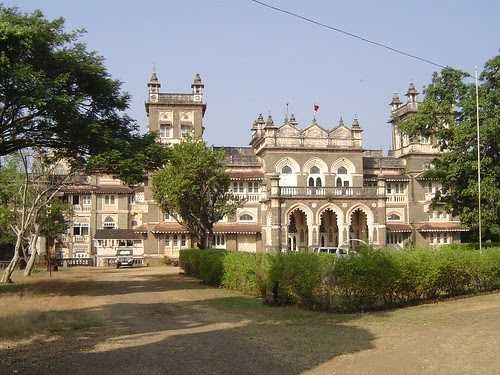 Later that night, we hired the same sailboat and we went for a one hour sail. We took snacks and drinks from the resort and ate them on the boat. The stillness, the moonlight, the gentle rocking of the boat, and the dark fort walls looming on one side, all made the sail a surreal experience. And the tikkas were great!

The next morning, after breakfast and a buggy ride on the beach, we drove back to Bombay. The route back is dotted with little farms and villages. We stopped and clicked lots of photos, but more about that some other time!
Posted by Aishwarya Pramod at Tuesday, December 25, 2007

Nice write-up Aishu! We went to MJ during our 8th standard school trip. It was a spectacular trip and your post brought back nice memories.

Nice article! Thanks for sharing the pictures. I am visiting india at the end of this year. This will be on my must-see list!

Hi Aishwarya, This is really very well compiled and great pictures. We are planning to visit Murud Janjira and are looking forward to it more so after reading your story. Many thanks.