I was walking along Bhaji Gully yesterday when I saw a crowd at a coconut shop.

It was Narali Purnima yesterday, the day that marks the beginning of the new fishing season. The fisherfolk offer coconuts to the sea, and pray for safety and a good catch (this year with the oil spills along the coast, they're going to need those prayers!) 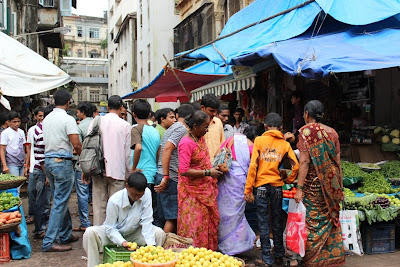 Crowd at the coconut shop

What I didn't know is that the guys play a coconut breaking game on Narali Purnima. I chanced upon it suddenly, so it added a real dose of fun to the day!

Basically the game consists of two players, each buys a coconut from the shop, and then they try to break each other's coconut. The tougher nut wins :) :) 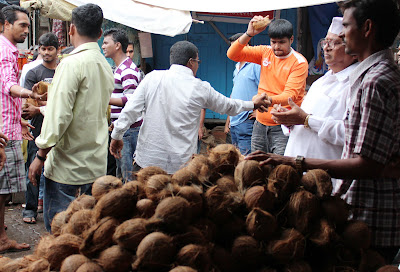 Stack of coconuts for sale, game in progress. Mr. Orange T-shirt gives it a go!

There is of course, a science behind the coconut selection. Too big, and the coconut will crack. Too small, and it won't be allowed in the game. Each player gets one turn to hit, and one turn to submit their coconut for hitting. 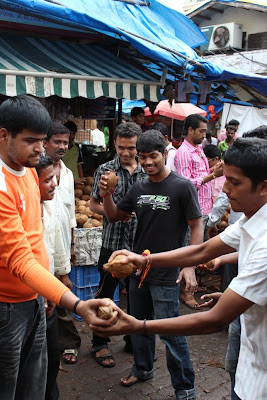 Give as good as you get

Sometimes, there's only a tiny crack on impact, and sweet coconut water comes spilling out. I saw the guys drinking the water by simply holding the coconut up over their mouths and letting the sweet water rush in. I wanted to go ask for some! 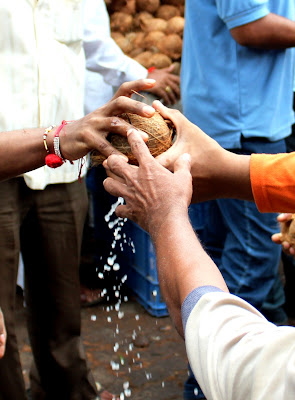 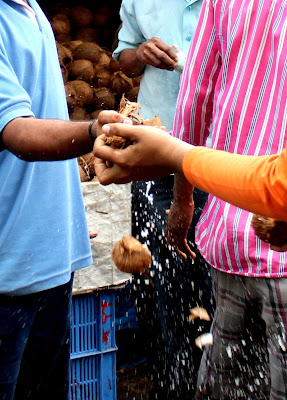 I had never seen this festival celebrated this way before - have you? There was a lot of shouting and glee all through the thing; a bunch of guys having a total blast. I had fun photographing it!!
Posted by Deepa at Sunday, August 14, 2011

Thanks to you, captured such nice moments on your blog. Interesting :)

Interesting. Unique game. I will probably try this myself at home :-) Thanks for posting. Please keep writting.

ha ha .... the shop keeper has a win win situation.