- by Deepa Krishnan
I went to Parel with my mom and sister, and on the way back, I photographed this building with metal grille-work. This is Sharda Cinema, Dadar; and the grille-work represents Sharada, the goddess of writing, the arts and all creative efforts. 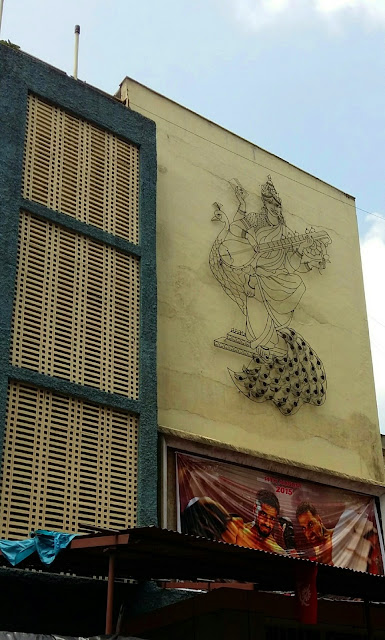 Sharda Cinema has been around for four decades now. This architectural style - do I call it Bombay Deco? - was popular in the 70's, and perhaps even the 80s. But I don't think it continued into the 90's.


Sharda is a single-screen cinema. The arrival of multiplexes has seriously threatened the survival of single-screens in Mumbai. The multiplexes are more expensive, but they have a wider range of films on show, and they are co-located in malls, making them attractive leisure destinations.

Most single-screen cinemas are struggling. Many old city icons like Strand and Minerva, have closed down. Some like my neighbourhood Rupam Cinema in Sion have converted into multiplexes.

But some - like Sharda Cinema - have survived in the single-screen format by adopting digitization. Going digital means they can screen "first-day" releases without waiting for the old-fashioned analog movie prints to eventually arrive at their cinema (high costs of analog prints means that the distributor only produces a limited number of them, and they cannot reach all cinema venues, so smaller cinemas lose out on the attractive first-day or first-weekend business).


When I saw Sharda Cinema, the poster was showing "Brothers", a mixed martial arts Hindi movie with Akshay Kumar. The movie had been released that week, and was being screened for 3 shows each day of the week. Alongside this, for the 3:30 pm show, the theatre was also showing a Marathi film "Double Seat", another new release. Sharda also shows some hit Bhojpuri films. Clearly they understand the working class clientele of this neighbourhood in Dadar East. Sharda has 1150 seats and according to an article I read in Outlook, they're managing to keep their head above water with 50-60% occupancy. Good for them.


Will Sharda survive? Will the other single screens in the city survive? The jury's still out on this one. Many of them are still open only because they cannot be converted into an office complex, or a mall (the space was granted to them specifically for a cinema/arts venue). The only thing they can do is convert themselves into more vibrant theatre/arts venues and see if that will work.
Posted by Deepa at Monday, August 31, 2015 4 comments:


Among Mumbai's many monsoon delights is this - white corn. It has small, dense, white kernels, which are satisfactorily grainy and chewy. It is leagues bettter than the sweet yellow variety that has flooded the market these days. 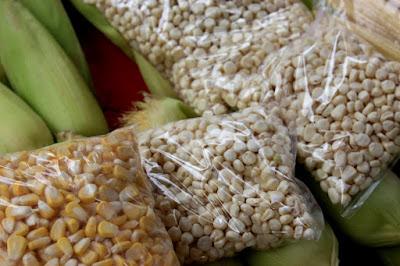 The masala-bhutta that is made with the white variety is a true delight. The starchy non-sweet white corn really works well with the lemon-chilli-salt rub and makes a big difference in taste. Once upon a time, the thela-walas only sold bhuttas of white corn. But now they've switched to yellow, and very few of them sell white corn bhuttas any more. I was lucky to find this guy near my house; he had both varieties on offer. No prizes for guessing which one I bought. 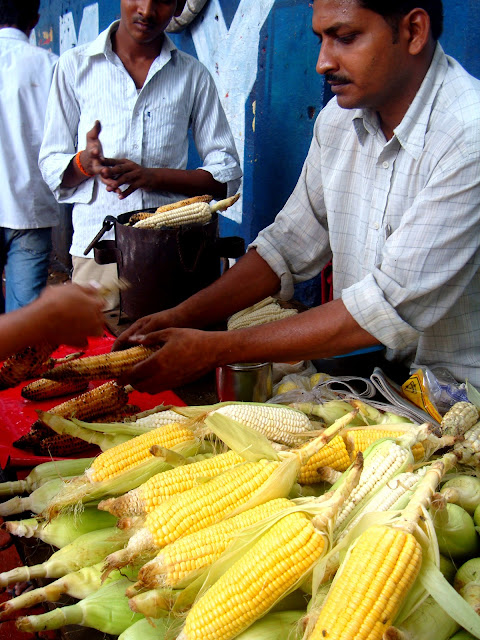 But really, a few exceptions aside - white corn has more or less disappeared from the market now.  There are only a few pockets in the city where they are available - I've seen them at Matunga Market, Bhaji Gully, and BB Dadar.

There are many reasons why the white variety has lost out to the yellow one. The sweeter taste of the yellow corn is popular with everyone. The yellow variety can be grown all through the year; the white one grows only in the monsoons. The white one has only 1 cob on a stalk; whereas the yellow ones, they have multiple cobs on a stalk (increasing the farmer's yield per hectare). The yellow ones are larger in size and heavier - and they also are more consistent in size and weight - so they offer better returns for the farmer. 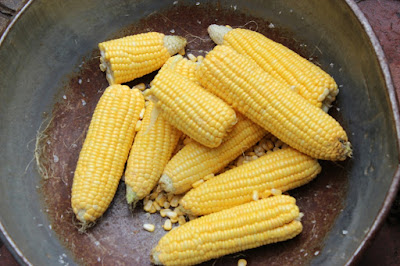 So what's wrong with the yellow one, you ask? It creates dependence on the seed companies, that's what. Seeds from one year cannot be saved and used for the next year. This yellow variety is "one time only". Means the farmer has to buy seeds each year.

Sigh. I think soon this white one will go extinct. Unless there is customer pull, to bring it back to the market. Join me, won't you? Every time I go to the market, I ask for white corn. So that the shop-keepers know that some people still want it!

Monsoon Treasures Series:
For those who want to see the two previous entries with more monsoon treasures: here are the two links:
Part 1 of the story -  http://www.mumbai-magic.blogspot.in/2013/08/bazaar-treasures-monsoon-special-1.html
Part 2 of the story - http://mumbai-magic.blogspot.in/2013/08/bazaar-treasures-monsoon-special-2.html
Posted by Deepa at Monday, August 17, 2015 2 comments: 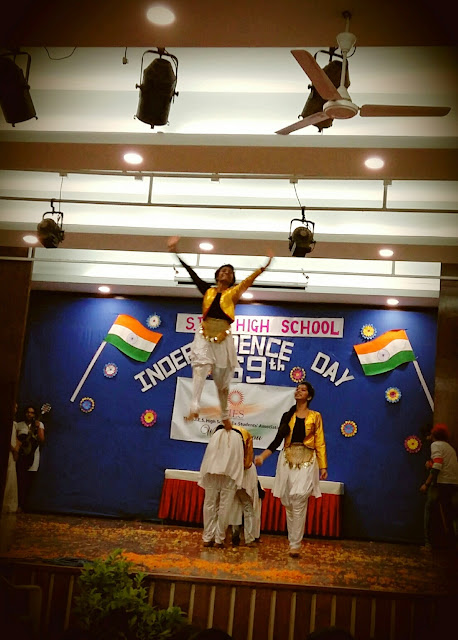 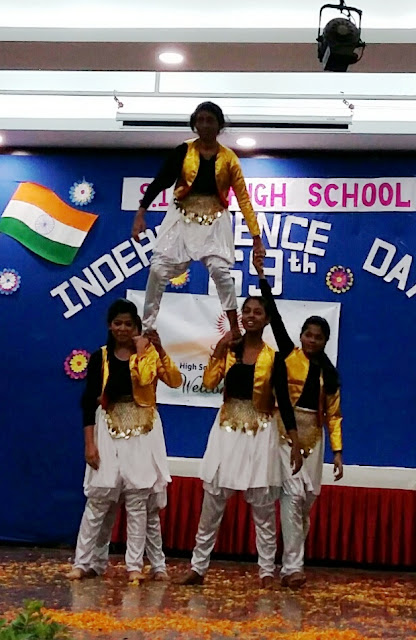 My photos really don't do justice to what I saw. These girls were not doing the usually Bollywood dances with sexualised poses. They were showing the world that they had attitude and spunk. That they were something to be reckoned with. I cheered with the rest of the audience, and wished there were more girls like these. And as I came back home, I realised something else: Change is here. Whether the old guard wishes it or not. Change is here.
Posted by Deepa at Saturday, August 15, 2015 2 comments:


The rock art of Elephanta has a sublime beauty that speaks to people of all cultures. To me, it is even more appealing because it follows well-laid out rules for iconography, allowing me to find and exult in the little details.

Today I thought I'd write about Kalyana Sundara, Shiva as the sublimely beautiful bridegroom. This aspect of Siva - so different from his usual appearance as an ascetic - is a major motif in the rock art of Maharashtra, appearing both in Elephanta as well as Ellora.

Take a look at this larger-then-life panel from Elephanta. Through image size and composition, the sculptor has made it obvious that this is a story about a couple. Equally, it is clear that the male half of this couple - the hero of the sculpture, so to say - is someone very grand. Even if you don't know any legends, you can still easily guess that this is a divine or royal couple, and you feel awe and curiosity about who they are.

This beautiful sculpture has unfortunately been broken by vandals. We are told that Portuguese sailors/soldiers took potshots at the carvings, using them for target practice. If the piece had been unbroken, it would have been obvious that this is actually a wedding in progress - because this is the panigrahana moment, the moment in the wedding where the bridegroom takes the bride's hand in marriage (pani = hand, graha = to take). They stand united as a couple, his right hand holding her right hand.

Here's a photo from the cave at Ellora, showing the panigrahana moment. You can see the depiction more clearly, because Ellora was spared the kind of vandalism seen in Elephanta.
But now - returning to Elephanta - take a closer look at the primary figure, Siva. At Elephanta, Siva is far more beautiful than the depiction at Ellora. See the graceful tilt of the head, the noble countenance, the elaborate head-dress, the sublime curve of the torso. The Divine Bridegroom is depicted as serene and resplendent on his wedding day. Standing next to him is his bride. See the modest downward bend of her graceful neck, the downcast eyes and the curved hips. She is the classical Indian beauty, personified and celebrated in stone. But frankly, he is more beautiful than her. It is in his figure, that all the lyrical energy of this sculpture is concentrated.
I wanted to read more about the Kalyana Sundara, the beautiful bridegroom. So I looked up Encyclopedia of the Saivism by Swami Parmeshwaranand, for a description of the bridegroom.

The Enclyopedia says that in the Matsya Purana, there is a section describing how all the gods assisted in adorning Siva for his wedding. The sun (Surya), the moon (Chandra) and fire (Agni) became the lights in his three eyes. Kubera the God of Wealth gave him a necklace of great gems (maharatnas), and Varuna the Sea God gave him a garland of unfading flowers. Chamunda, the fierce form of the goddess, gave him a kapalamala, a garland of skulls. Indra the King of Gods gave him an elephant skin to wear, and Vayu the Wind God decorated Siva's bull Nandi.

When Siva was thus beautifully arrayed as Kalyana Sundara, the seven oceans formed a mirror in which he was pleased to see his own splendid form reflected. Can you imagine this? The great god, Siva Maheshwara as Kalyana Sundara, his beauty reflected in all the oceans of the world? What a powerful concept!

Apart from Siva and his bride Parvati, there are many supporting figures in a typical Kalyana Sundara panel. There are several scriptural texts (collectively called the Agamas), which lay down rules for the appearance of Siva, Parvati and these supporting figures.

In a typical Kalyana Sundara scene, there is a four-headed Brahma at the foot of the panel, usually depicted performing the homa (offering to the fire). Brahma is the priest at the wedding. There is Indra, depicted standing behind Brahma. The Brahma and Indra at Elephanta are very damaged. The one at Ellora (the right side of the panel below) gives us a better understanding. 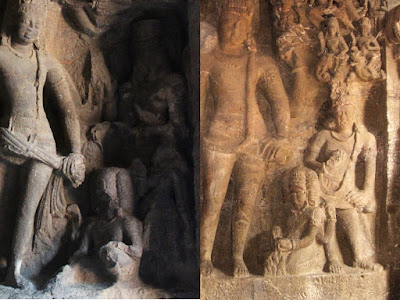 There are usually two standing figures behind Parvati, who are giving away the bride. Likely to be Himavan, father of Parvati, and his wife. There is also a third male figure, carrying a kalasha, a pot. Check out his hair-style. It's like a judge's wig! 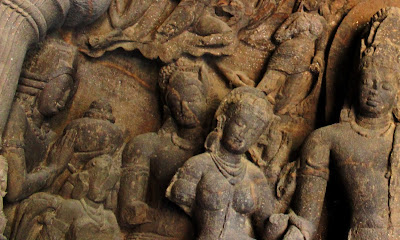 Now we come to the host of divine and semi-divine creatures that are witnessing the grand wedding event. They are shown flying in the sky, amidst clouds. 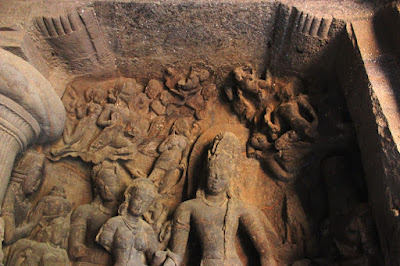 The Agama texts suggest that there should be several different types of flying creatures depicted in a Kalyana Sundara scene:
Next time, I'll write about some of the other panels at Elephanta. Each one is very interesting. I hope you will take a closer look at the wedding of Shiva and Parvati the next time you go to Elephanta. I'm sure you'll discover small details that delight you.
Posted by Deepa at Saturday, August 08, 2015 1 comment: