Why Mittal Patel is one heck of a lady

Some days ago, I met Mittal Patel, a very determined young lady from Ahmedabad.
Mittal is a journalist by profession. But for the past 5 years, she has been working with the nomadic and de-notified communities of Gujarat, trying to get them access to basic rights. In doing so, she's taken on two of the biggest challenges in India - the bureaucratic system, and the caste mindset. 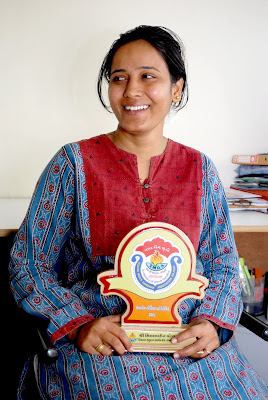 Mittal Patel
It was my neighbour Rashminbhai who introduced me to Mittal (or Mittal-ben, as she is called by most Gujaratis).
At Rashminbhai's invitation, I spent an evening at Amulakh Amichand School in King's Circle, watching Mittal tell her story to an audience of 100 people.

Mittal talking about nomads. The speech was in Gujarati.
I was so fascinated that the very next morning, I went over to Rashminbhai's house, and spent three hours chatting with Mittal. Over many cups of chai (and Rashminbhai's delicious farsaan), I listened to more details of her work.
It was quite an education.
The nomadic tribes of India are spread over multiple states, primarily Maharashtra, Rajasthan and Gujarat. In Gujarat, they number around 4 million, and this is the target group that Mittal has sworn to support (that's roughly the population of Singapore or Ireland, by the way). 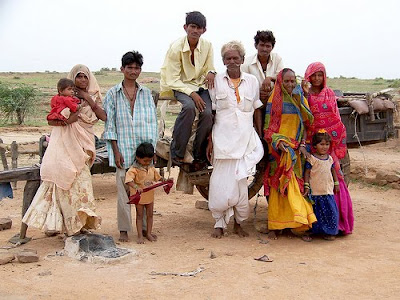 One nomadic family with their cart. All their belongings will typically fit into the cart.
Gujarat's nomads are not one single community (there are over 300 communities listed in the government list). They follow different religions, practice different occupations, and have different customs and beliefs. The Dafer people, for instance, are typically employed to guard ripening crops. The Saraniyas are knife sharpeners. The Kangsia are bangle sellers and traders. The Nat and Nataniyas are performers - bards, musicians, acrobats, dancers, fire-eaters and so on. The Vansfoda work with bamboo and sell bamboo products. The Vadis are snake charmers; the Madaris work with monkeys.
As Mittal rattled off one community name after another, I was struck by the one thing that all these communities have in common - their traditional way of life is either dying, or dead already.
Television and cinema have largely killed the demand for traditional entertainment. Legislation has killed the livelihood of those nomads that work with animals. Plastic has replaced bamboo and other materials. And so on. In the past, people in a village waited for the nomads to show up on their annual routes, trading goods, services and entertainment. Now, there is no demand. So the nomads are quite literally, out on the streets, reduced to begging and theft for their livelihood. 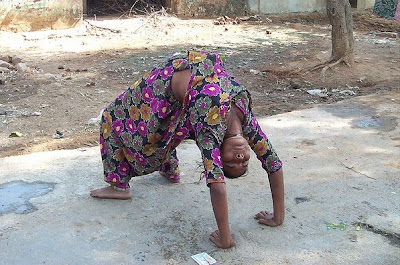 No takers for acrobatics.
As if the loss of livelihood was not enough, the nomads have another big problem: As far as the government is concerned, they don't exist. I'm not kidding. The nomads have nothing, no birth certificate, no ration card, no land deeds, no school admission record, nothing. Not a single piece of paper, to prove they're part of the Indian population.
What this means is that they are completely left out of all government schemes. Take NREGA, for example, which promises work and an honest day's wage to anyone who wants it. Even if a nomad woman says she wants work, she can't get it. Why? To be eligible for NREGA you need to be a resident of a village. But village panchayats routinely refuse to let nomads be registered as part of the village population. They're nomads, right? They don't belong! So what if they've lived on the outskirts of a particular village for 20 years. They still don't belong! In fact, Mittal tells me that when she goes looking for a nomadic settlement, villagers typically do not even acknowledge that it exists. 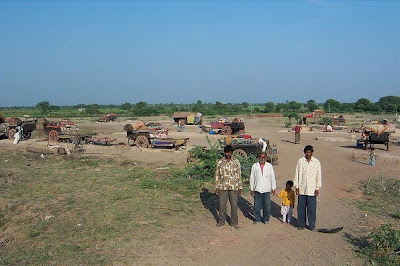 Saraniya settlement on outskirts of village. This is no man's land, typically on the boundary of two villages. So neither village owns up to the settlement.
Apart from this, old prejudices and caste issues also kick in. Some nomadic communities have traditionally been labelled thieves. Most are from the lowest rungs of the caste hierarchy, with zero respect from other, higher castes. There is also the fear that if they are formally acknowledged, they will stake claim to government benefits.
Net net - the nomads are left out there in the cold - with neither the government nor the village recognising their existence. Not surprisingly, Mittal's biggest effort is firstly, to get every nomad a piece of paper that says, Hey! Look at me! I'm here! I am Indian! I'm Gujarati! I live in this village!
This ought to be simple, but as anyone who has worked with government machinery in India will tell you, it's staggeringly difficult in practice. In the first place, the whole thing requires forms to be filled and submitted - and how does an uneducated nomad do that? Mittal told us a quirky story about how she tried to help a middle-aged nomad with filling a form:
Mittal: Janunath, where were you born?
Janunath: I'm not sure. You write what you think is right, Mittal-ben.
Mittal: But how can I just cook this up? At least tell me something more about the areas where you roam, so I can write something sensible.
Janunath: I don't know, Mittal-ben. Ask my mother.
Janunath's Mother: We go to many places, Mittal-ben. I don't know where we went that year when he was born.
Mittal: Fine, I'll write something or the other. OK, Janunath, tell me what your age is.
Janunath: 18
Mittal: 18? Are you sure? You look older to me.
Janunath: I don't know, Mittal-ben.
Mittal: Do you have children?
Janunath: Yes, four children, here they are.
Mittal: Ah, so this one is the oldest? He looks like he is 14!!
So Mittal gives up asking questions, and she estimates everyone's age by looking at the age of their oldest child! And thus the form is filled for the whole clan, with approximate age, approximate place of birth, and so on :)
But form filling is only the beginning. The next problem is that the form verification process requires the village panchayat to certify that the details are correct. This is, of course, next to impossible. So Mittal and her team have to keep shuttling endlessly between the government and the panchayat office, patiently coaxing people to do what is right.
Without going into all the painful stories, let me just say that it is STUPENDOUS achievement, that Mittal Patel has finally got voter id cards issued to 20,000 nomadic people. 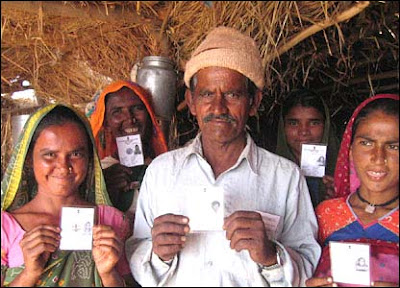 Way to go, Mittal-ben!!
That's not all. She has lobbied and got the Gujarat Government to pass a new State Resolution, which gives nomadic/de-notified people land rights. In the first year of allotment, 502 plots of land have been alloted to people who previously had no piece of earth to call their own. Mittal has started "tent-schools" for nomadic children, conducted "group marriages" to help reduce the burden of wedding expenses on nomad families, rescued nomadic girls from prostitution, and taken on many other social issues.
Honestly, I can't think of a more difficult challenge than trying to change the way "society" thinks. And I can't think of a more frustrating task than to get the big slow blundering bureaucracy to do something different. But Mittal has taken both these challenges head-on, and proved that it can be done.
When you meet people like Mittal, you end up feeling like you simply have to do something to help. You can't just sit there and let someone struggle against huge odds. I've started by contributing from my company's profits to Mittal's NGO; and next April, I'm planning to work on training and providing employment to some of her nomadic women. I'm looking to make a trip to Ahmedabad soon. Anyone who wants to contribute is welcome.
Posted by Deepa at Sunday, December 19, 2010

Wonderful information and all the very best to Mittalben for her fantastic efforts. Hope she gets more of these people educated and well informed about their rights, etc. Why isn't the government doing something about this vote bank?!!!
Cheers,
Aadil.

Nomadic people around the world seem to be facing the same issues, whether they are Bedouins in the Arab nations of Romas in Europe. Kudos to Mittal for the work she is doing. It is indeed very difficult to navigate the Indian Govt machinery.

Please contact me at deepa@mumbaimagic.com if any of you would like to help Mittal's efforts in any way.

I would like to contribute some money, how do i send it? rraghunandanr@yahoo.com

I work with the Afternoon Despatch and Courier. I'm doing an article on bloggers and blogging for the lifestyle supplement of the paper and I recently stumbled across your blog and loved it. I would love to feature you and your blog in my story as one of the best blogs. Do get back to me at ree.dhanbhoora@gmail.com asap. Thanks so much!

Kudos to Mittalben :)
Harsh reality and a bold eye opener to it. I would also like to do my part to the NGO started by Mittalben .. she is truly one heck of a lady!! Salutes to her !

Mittal-ben you are great person. Plese let us known your contact details so that we can join u. vikash_nn@yahoo.co.in

Dear Mittal
It was very impressive to see you receive award in reliance foundation real hero award program. I was impressed than but reading about your work actually i am super impressed.
Mr. Modi should take a note of these and make sure that progress in Gujarat is inclusive, no point in just bringing big industries making richer more rich and having communities of who doesnt have basic neccessities and more so they dont even have an identity.
Well done Mittal and Please create your blog and let more people extend helping hand in whichever way they can

Lovely post Deepa and Fantastic work by Mittal. A community that does not let its roots bind it in any way and yet seem to belong. Thank God fro people like Mittal who help them 'belong' in a social and legal framework.

Well done on this huge task. .

Great work for Indian people who are suffrerd a lot in the period of british as well as after freedom.