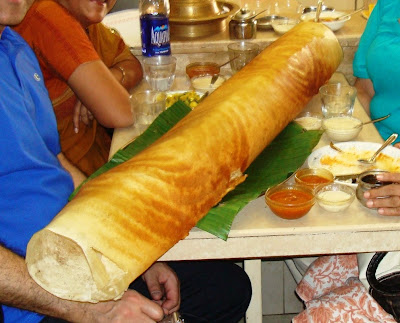 That Dosa looks perfect ! reminds me of a 6 foot dasa they used to make at VGP Golden Beach ... wonder if its still on ?

In Pune it would be:
-Vada Pav
-Pav Bhaji
-Misal Pav
-Dosa

I can't look beyond the picture! I am drooling at the dosa.

Dosas & Sambar! Yum-yum-yummy! It's been so long since I had some. I live in a part of town where it takes some planning to get this and now, I think I must do that planning--NOW!

Completely agree with you! Long live the dosa so that we can eat it forever!

I recognized the pic!!

I am the one in your pic!! The dosa was delicious and we were the ones to enjoy this particular one!

Why is Pani Puri not in ur TOP 3 Deepa?

Hi Deepa. I am from Calcutta. Long before the concept of rolls, noodles and burgers became popular as fast food on the go, the typical south indian joints would roll out the dosas in a jiffy and most calcuttans looked upon them as a fast food option (and a cheaper one too price-wise. So the Dosa may not be seen as a national dish but definitely it is Calcutta's most popular fast food choice even today.

It's Sunders, in Matunga market (King's Circle), near the kabutarkhana.

Is that Shree Sundars or just Sundars? Two of them with a common name but the first one is bigger and better with lots of delicious varieties of dosa and some great stew with appams too. Just love this place.