How do you survey a billion people?

Two diminutive women showed up at the door this week.

They said - in Marathi - "Janaganana karaycha aahe"
Jan-a-gan-a-naa (a neat tongue-twister, try saying that fast!), is a compound formed from two Sanskrit words:
janaH = people
gan.H = to count or consider

After they rattled off that tongue-twister again, I figured it out (thank god for Sanskrit lessons in school).

"Ah" I said to them, sounding ridiculously Anglophone and hopelessly upperclass. "Census-saathi aale ka?" Are you here for the Census?

It was a hot summer afternoon. I invited the ladies in, and offered refreshments. It was then that I saw their big black bag - CENSUS OF INDIA 2011. 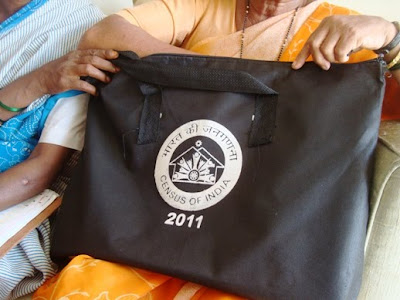 From the depths of the bag, the women produced large forms. I had expected tacky forms on bad paper, the sort you see at the Post Office. Instead, the forms were aesthetically pleasing, printed on thick, good quality paper, and colour-coded for ease of use. Later I found out that the forms would be scanned through character recognition software, and that there would be no manual data entry. 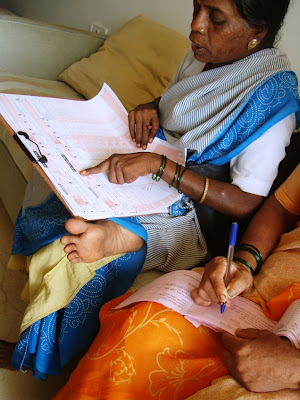 The Enumerators with their form and custom-designed pad.

There are 2.7 millon Enumerators roaming all over the country at this moment, surveying 240 million households. They've been given 45 days in which to do it. Since this is India, where people speak 450 languages, the Powers that Be have sensibly restricted the Census forms to 16 primary languages. The Postal Department - another giant Indian undertaking - has been kept busy shipping these forms to multiple data collection centres across the country.

For anyone who has run any kind of project, the challenges of tackling such a gigantic logistics effort are quite obvious. For example, how do you train 2.7 million Enumerators? The Census team follows a cascading system, of course, starting with a mere 90 trainers at the top of the pyramid, but geometrically progressing to 2.7 million in three crazy big steps.

all the 2.7 milllion Enumerators!
Sigh. Sheer poetry. The math is beautiful. Honestly, this is the kind of big leap of ambitious "can-do" that impresses me no end. Here are some other impressive numbers:
I sat down to answer the questions, but I was also very keen to see the whole process in action.

There seemed to be two types of forms - one type that collected basic data about the household and its members, and another that collected information about the quality of housing and amenities, assets, and other lifestyle questions.
The basic data will go into the National Population Register - an ambitious project that is being done for the first time ever in India, to produce accurate information about people living in each area. The National Population Register will contain a "List of Usual Residents" for each area, along with socio-economic profile (gender, education, occupation etc). From this list, duplicates will be weeded out across the country, and every Indian will be issued a Unique ID. 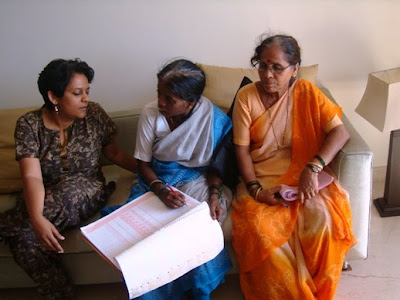 Answering questions for the National Population Register
I'm waiting now, to see what they're going to do with our names. The women wrote them down in Marathi, ruining the pronounciation and spelling. What further destruction the character recognition software will do to our names, I don't know.

But I have (strangely), a lot of faith in the bureaucracy. Slow and plodding it might be, but it usually gets things done, and is capable of getting things done on a very large scale. Let's wait and watch.
Posted by Deepa at Sunday, June 06, 2010

UNIQUE ID Project finally kick started.. I am so relieved!

Nandan Nilkani is the man behind this dream!

The official who came to my house talked about how blessed he was doing the survey in a housing society. One of his colleagues is doing the survey in a nearby slum area. The father claimed there were 14 of them in the family the mother claimed there were 17. The official had to wait till day's end until the children confirmed that no one was left out. Turned out there were 16 - and you ask 'How Do you Survey a Billion People?' Relevant question I say.

A much tamer affair here in the US -- they just send you a form (although someone did call me later to confirm my answers).

Speaking of which, I recently heard a first-hand account of the IIM CAT fiasco, which apparently was a case of ETS completely underestimating the problems of scale in India.

"I'm waiting now, to see what they're going to do with our names. The women wrote them down in Marathi, ruining the pronunciation and spelling. What further destruction the character recognition software will do to our names, I don't know."

I was concerned about this myself, Deepa. Particularly since I had faced a similar mis-spelling the first time Voter ID cards were being issued. The census enumerator however assured me that all people would soon have to visit a neighbourhood centre to be photographed and we would then also have an opportunity to review our spellings in English. I hope he knew what he was talking about!

Hi forms were designed at NID by our Information Design Faculty Rupesh Vyas. Many usability issues were considered including extracting data from the form. It is good to see this in action.

Rupesh and myself were also involved in MNIC Smart Card design.

Roopesh - The process is explained in this presentation:
http://www.slideshare.net/nik1409/india-census-2010
There are opportunities for correction. During the information collection they did not ask us how the names were spelt. When I offered to write the correct name, the ladies said, no, we have to fill this form, not you. This is such a nightmare. Other information is also casually collected, birth dates etc. How can this be the basis for any official identification?

Praveen, that is wonderful to know. I have worked a little bit in user interface design for applications, so I could see that they had no problems in using it and also the "flow" of information was smooth.

Shobna - In actual fact it might have been that new migrants into the city (i.e. cousins / nephews / uncles etc) were all being included, therefore the discrepancy between what the father, mother and children said.

Your blog is very impressive.
It shows the life of Mumbai in all colors.

Have you seen http://www.go4mumbai.com. This is a utility site to help Mumbai people travel smartly. We are group of few IT experts trying to help co-travelers in Mumbai.

Will you be interested in exchanging the links? which means we'll put your link on go4mumbai and you put our. We are currently getting about 10,000 hits in a day.

The enumerators who walked into my home were exactly the way you described them. They got the names all wrong. It was worrying too. I tried correcting them, but each time they made a fresh mistake. It is a tough, thankless job.

I am really enjoying your blog. It is like a window into another world. I travel in India and write about it on my blog -- but as I am from Canada, it is more of an outsider's view. Yours is an insider's view! But it helps that I have been to Mumbai (last February for about a week). Thank you for sharing.

would you know whom can I get in touch with for the census, they had come many times at my place, but the flat was locked, since we both are working. Am also checking this on the net, but incase you get the info, please do let me know.

would you know whom can I get in touch with for the census, they had come many times at my place, but the flat was locked, since we both are working. Am also checking this on the net, but incase you get the info, please do let me know.

Hey! Just found this blog when I googled elco. I'm a Bombayphile. It's in my blood and I've left my heart there, not to mention my umbilical chord :P
But why I am commenting is to say I love the idea of a three generation blog. Will be coming back for more!

Thanks Deepa for yet another insightful account on the Mumbai Magic blog. You inspired be to put together this piece for Design Observer: India's Epic Head Count

I had to do this to help my mom who was a BMC teacher during the 2001 census. Running around on the Bajaj Chetak, cutting through the slums in Ramabai colony, getting arbitrary numbers from multiple sources as to who lived in that particular zhopdi, asking neighbours for information, being shocked at the size of the Muslim families, totally guessing names because there was no one to give reliable data(I was told they just wanted a count of the boys and girls in the family, names didn't matter.. Shakeel, Abdul, Salma, whatever..)

Bombay seems like a distant dream on the other side of the globe. Sanitized life but not as interesting.